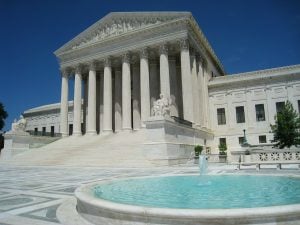 WASHINGTON, D.C. (June 28, 2022) – The George Washington University (GWU) agreed, after hearing strong statements from numerous members of its law school faculty, not to fire Justice Clarence Thomas who teaches a course at the GWU Law School.

In a communication signed by its Provost and Executive VP for Academic Affairs, Christopher Alan Bracey, and the Dean of its Law School, Dayna Bowen Matthew, it said:

“Because we steadfastly support the robust exchange of ideas and deliberation, and because debate is an essential part of our university’s academic and educational mission to train future leaders who are prepared to address the world’s most urgent problems, the university will neither terminate Justice Thomas’ employment nor cancel his class in response to his legal opinions.”

It continued: “like all faculty members at our university, Justice Thomas has academic freedom and freedom of expression and inquiry. Our university’s academic freedom guidelines state: “The ideas of different faculty members and of various other members of the University community will often and quite naturally conflict. But it is not the proper role of the University to attempt to shield individuals within or outside the University from ideas and opinions they find unwelcome, disagreeable, or even deeply offensive.”

Public Interest law professor John Banzhaf, one of the first to publicize the student petition to terminate Thomas’ employment, said he was delighted with his university’s prompt decision to stand up to this latest incident of cancel culture – but apparently the first to involve a sitting supreme court justice’s teaching position at a major university – and to reaffirm the rights of “all faculty members at our university” to “academic freedom and freedom of expression and inquiry” including to express ideas some may find unwelcome, disagreeable, or even deeply offensive.”

This, he notes, is in stark contrast with the actions of neighboring Georgetown University which recently fired a faculty member for expressing views some found offensive, and then allowed him to come to work only after warning that any future expression of the same views would likely lead to his being fired again.

‘These sound like the same students who signed a petition asking their GW university to ban the stick figure used on lighted crosswalk signs on campus because they feel ‘oppressed’ because the figure appears to be that of a white man telling them what to do,’

According to Banzhaf, ‘while there have been many other situations in which students have demanded that a professor be relieved of all his teaching duties because some disagreed with his views, this may well be the first time that students want to stop a Supreme Court justice from agreeing to teach at a law school.’”