My Guidance For This Bear Market 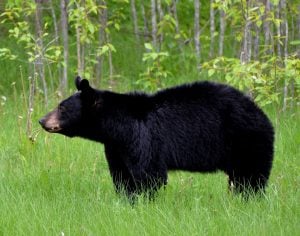 US stocks are in a bear market…

The S&P 500 has fallen around 20% from its record high in January. The tech-heavy Nasdaq is down nearly 30% this year.

The American Association of Individual Investors survey shows there are more stock market “bears” today than at any time since the ‘08 meltdown.

If you’re feeling nervous or confused…

If you’re wondering what to do with your money today…

This RiskHedge Report is for you.

Today, I’ll show you what a bear market ultimately means for your money, and why it’s presenting a buying opportunity for long-term investors.

What Does A Bear Market Mean For Your Money?

We’ve had 25 bear markets since 1929. They typically last a little over one year, during which US stocks drop 33%, on average.

The S&P has fallen more than 20% since peaking in January. If this is an “average” bear market, stocks will likely continue sliding a bit further. It’s tempting to sell everything when you read this. Why wouldn’t you get out of the market if we have further to fall?

Problem is… there’s no such thing as an average bear market. Some sell-offs trudge along for years, others only last a few months. Nobody can predict what’s going to happen next. You could dump your entire portfolio tomorrow, only to see stocks rip higher. And then you have a real problem: when to jump back in.

It’s extremely difficult to time markets. Most professional money managers can’t even do it.

I don’t know how long this downturn will last, but here’s what I do know…

Guess what happened to those returns if you tried to time the market and missed the five best days each year? Instead of making 10% per year… you lost 4%. 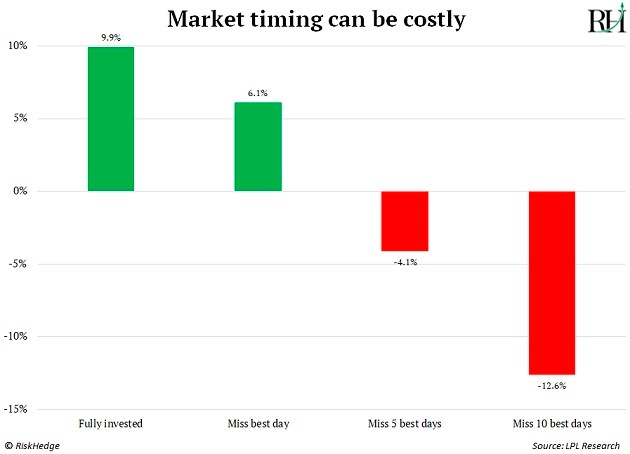 Here’s the catch… the best days happen in the worst markets.

The four strongest days ever for US stocks all happened during the Great Depression. The next two best days took place during the 2008 financial crisis. And more than half of the S&P 500’s biggest “up” days in the last 20 years occurred inside a bear market.

A Year From Today, Stocks Will Likely Be Higher…

Bear markets are scary for investors.

It’s not fun watching a sea of red stock tickers every day. It can feel like the selling will never stop. Using 90 years of market data as a guide, stocks likely have further to fall.

But for long-term investors, this isn’t the time to sell. It’s the time to buy. As famed value investor Shelby Davis once said: “You make most of your money in a bear market, you just don’t realize it at the time.”

Investors are more bearish than at any other time since the ‘08 crisis. According to the latest Bank of America fund managers survey, portfolio managers are sitting on their highest cash positions since 9/11.

Folks are panic selling, driving down stock prices and valuations. If you plan to be in the markets over the next few years, you want to be buying this panic, not selling it.

Buying Stocks During Downturns Has Proven To Be A Winning Strategy. 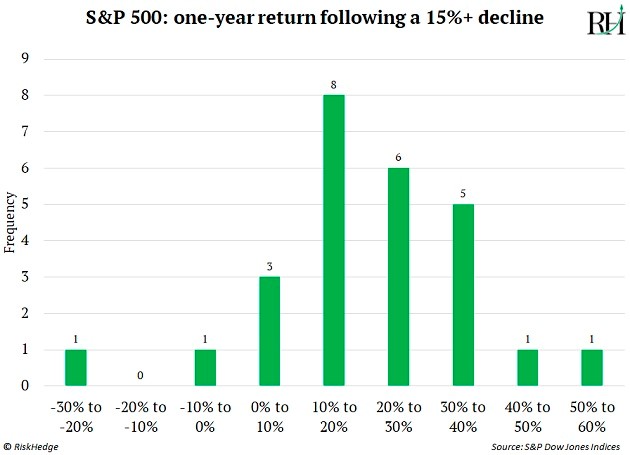 That’s a great track record. The evidence is clear. Investors who embrace panic and buy during sell-offs reap the rewards.

Some of the world’s best businesses are on sale today.

Take Amazon for example. It’s in the midst of its sharpest drawdown since 2006. The stock is trading where it was in September 2018… despite Amazon’s business being twice as large.

Meta (Facebook) and Google are selling for their cheapest valuations in history. In fact, when measured by free cash flow, they’re now trading at a lower valuation than Coca-Cola, a 120-year-old soda maker that barely grows. That’s never happened before…

Computer chip stocks—my slam-dunk investment of the decade—are now as cheap as most of them have ever been.

There was a lot of froth in the market that needed to be washed out. In November, Rivian, an electric truck maker with only $1 million in sales, was valued at $150 billion. We’ve swung from one extreme to the other. Many of the world’s best businesses got clobbered. Some are cheaper than they’ve ever been.

This is a great opportunity to buy shares of businesses you believe in. The greatest investor of all time agrees.

For years, Warren Buffett complained stock valuations were too high. That led him to sit on a record $150 billion cash pile. Now Buffett is putting money to work. He bought $50 billion worth of stock last quarter, the most money he’s invested since just after the ‘08 meltdown.

Buffett is taking advantage of this downturn to buy great businesses at big discounts. And that’s what I’m doing.