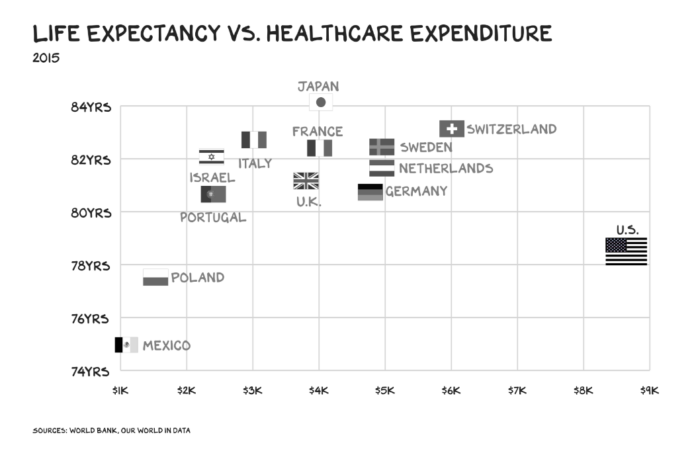 The U.S. healthcare industry is a wounded 7-ton seal, drifting aimlessly, bleeding into the sea. Predators are circling. The blood in the water is unearned margin: price increases, relative to inflation, without a concomitant improvement in quality. Amazon is the lurking megalodon, its 11-foot jaws and 7-inch teeth the largest in history. With the acquisition of One Medical, Amazon is no longer circling … but attacking. Healthcare can boast tangible achievements over the past 40 years. Life expectancy was up from 73.7 in 1980 to 78.8 in 2019 (before Covid knocked it back down a bit). There’s been a revolution in pharmacological treatments, and genetic research is starting to pay dividends. But the financial return — improvement divided by cost increases — has been abysmal. No nation has registered cost increases similar to those of the U.S., and no one spends as much as we do per capita in absolute terms. Yet nearly every developed country has better outcomes, with longer life expectancies, healthier populations, and far less economic stress. Two-thirds of personal bankruptcies in the U.S. result from healthcare issues — medical expenses and/or time off work. For many middle-class American families, if Mom or Dad gets cancer, there’s a good chance the family will go bankrupt. Forty percent of American adults have delayed or gone without needed care because it’s cost prohibitive. For every improvement in healthcare, it seems our system finds a way to extract a dark lining. That same pharmacological revolution that improved outcomes for millions brought the opioid epidemic. In many areas, our results are lousy at any price: The U.S. has one of the highest infant mortality rates among developed nations.

Beyond spotty efficacy, healthcare offers the second-worst retail experience in the country. (Gas stations retain the No. 1 spot.) Imagine walking into a Best Buy to purchase a TV, and a Blue Shirt associate requests you fill out the same 14 pages of paperwork you filled out yesterday, then you wait in a crowded room until they call you, 20 minutes after the scheduled appointment you were asked to arrive early for, to be seen by the one person in the store who can talk to you about televisions, who has only 10 minutes for you. New York is the wealthiest city in America, yet the average waiting time in an emergency room is 6 hours and 10 minutes.

A good rule of thumb in business is that if it’s bad for the consumer, it’s worse on the other side of the counter. Physicians spend just 27% of their time helping patients — 49% is spent dealing with electronic health records. That includes documentation, order entry, billing, and inbox management. In other words, you spend a decade going to school to get an M.D., only to become a bureaucrat.

No industry has better demonstrated the dis-economies of scale. If we received the same return on our healthcare spending as other countries, we’d all live to a 100 without getting sick. Or, more likely, we’d spend far less, still live longer and healthier lives, and save enough to pay off the national debt in 15 years. U.S. healthcare is the worst value in modern history.

OK, so what to do? At the center of the worst system of its kind, except for all the rest — i.e., capitalism — lies the answer: competition.

Last week, Amazon announced its plans to acquire primary healthcare company One Medical for $3.9 billion. I believe this deal represents the catalyst for a significant societal unlock. I’ve been a member of One Medical for two years and think it’s outstanding. When I contracted Covid, I tapped the One Medical icon on my phone; within a few minutes I was speaking to a nurse practitioner who prescribed Paxlovid and even told me which nearby pharmacies had the antiviral in stock.

With Amazon, the company can recognize its vision. To date, One Medical’s stock has performed poorly — down to $10 per share from $40 at the beginning of 2021. It lost a quarter of a billion dollars last year, and needs capital (which Amazon has: $60 billion in cash). Next, ONEM needs scale. At present the service boasts 736,000 members — impressive. More impressive: More than half of U.S. households are Prime members. The final piece is delivery. One Medical operates a digital health / physical office hybrid business, but you still have to pick up medication from the pharmacy. The obvious upgrade is to have your Paxlovid delivered within hours of a remote consultation. This is Amazon’s core competence — it will happen. Speed and convenience will be so differentiated in healthcare, it will feel alien. As with most paths to disruption, it’s been long and winding. Four years ago, Amazon teamed up with JPMorgan and Berkshire Hathaway to form Haven, hoping to provide better and more economical healthcare for their combined 1.5 million employees. Despite rocking the stocks of healthcare markets the morning of the press release, it was a headfake and folded in 2021.

Next, Amazon built an in-house service for its employees: Amazon Care. Virtual health services, plus nurses … delivered to your home. It’s doing much better, expanding across the country, and now provides healthcare for other companies. (Hilton is Amazon Care’s largest disclosed customer.) The acquisition of One Medical will couple capital, domain expertise, and installed tech with billing infrastructure, and bring it to 66 million Prime households. Imagine:

“Alexa, I feel feverish and my lower back is aching.”

“Connecting you to an Amazon Prime medical professional now.”

Want to vs. Have to

I predicted Amazon would get into healthcare several years ago. Why? For the same reason Apple is getting into auto: not because it wants to, but because it has to. Amazon stock’s price-to-earnings ratio is 56 — more than double Walmart’s. For the company to maintain its share price, it needs to add a quarter of a trillion dollars in topline revenue over the next five years. It won’t find this kind of revenue in white-label fashion or smart home sales. It has to enter a gargantuan market that lacks scale, operational expertise, and facility with data. Amazon isn’t the only predator sniffing prey. Walmart and Alibaba are both working on their own pharmacy businesses. Uber is working on healthcare transit. And in the private markets, telehealth received $29 billion in venture funding last year, up 95% from 2020. The obvious and immediate unlock is telehealth, which was accelerated by the pandemic. In a matter of weeks, after the first positive Covid case in the U.S., services the industry insisted had to be delivered in person shifted to Zoom … and we survived. In fact, we thrived. Even once in-person visits were permitted, video house calls remained a thing. McKinsey estimates that the number of telehealth visits has stabilized at 38 times pre-pandemic levels. Doctors adopted the technology, regulators relaxed limitations, and patients saved time as barriers fell. We’re a long way from remote surgery, but huge numbers of patient visits don’t need to be visits at all: A study of 40 million patients during lockdown showed that for certain groups (e.g., people with chronic conditions) outcomes didn’t suffer when visits shifted online. And we’ll only get better at delivering care this way. The disruption achieved by Amazon will be significant, and the flood of capital, startups, and consumer brands that will follow it into the space will inspire profound change. Mark Cuban launched a pharmacy in January that eliminates middlemen — from the insurer to the pharmaceutical benefit manager. The result? A 90-day supply of acid-reflux treatment that cost $160 is now $17. It’s estimated Medicare would have saved $3.6 billion in one year if it had purchased generic drugs through Cuban’s pharmacy. As other apex predators look for new sources of growth, many will turn their gaze on different limbs of the carcass. Nike could enter healthcare through a wellness positioning: orthopedics, acupuncture, and chiropractic. LVMH, L’Oréal, and Estée Lauder could build the first global plastic surgery brands. The Four Seasons and Hilton might open hospitals. Lennar and Pulte could build “Active Living” communities that Nana will leave feet first, bypassing the expense and tragedy of dying under bright lights surrounded by strangers.

Privacy is a concern: Your credit card and billing address is one thing, your HIV status another. However, I believe these concerns are overblown — most consumers (60%) feel fine sharing their personal health data over virtual technology. In addition, this is inevitable. Eighty-five percent of physicians believe radical interoperability and data-sharing will become standard practice. Finally, when it comes to handling your personal data, Amazon is the most trusted Big Tech firm. Reminder: Amazon is not Meta.

And What of Antitrust?

Amazon should be broken up (forced to spin off AWS and/or Amazon Fulfillment) and prohibited from advantaging its own products on the platform. It should also be permitted to enter healthcare via acquisition. The acquisition of One Medical is minuscule compared to the larger healthcare market: a $3.9 billion deal, while the largest healthcare company in America, UnitedHealth, has a market capitalization of $498 billion.

Elegant antitrust enforcement should not fall into the trap of believing that some people/firms are good/bad. It should recognize that competition is good, and in each deal the DOJ and FTC should stay focused on the prize: How do we make markets more competitive? E-commerce, digital marketing, and social media are too concentrated, and the FTC should force a divestiture of assets. At the same time, those same companies can foment much-needed competition in what has become a social ill.

We are overweight, depressed, and increasingly broke at the hands of U.S. healthcare. The treatment that offers the best outcomes is the same therapeutic that’s resulted in massive value and prosperity across most of our economy: competition.

Life is so rich,

P.S. The cost of ads has risen astronomically. If you feel like you’re burning money, you might like our new workshop on Marketing Acquisition Strategy with ex-Slack and Google leader Holly Chen. Enroll now.