Energy crisis: the UK is still heading for widespread fuel poverty – despite the government’s price cap 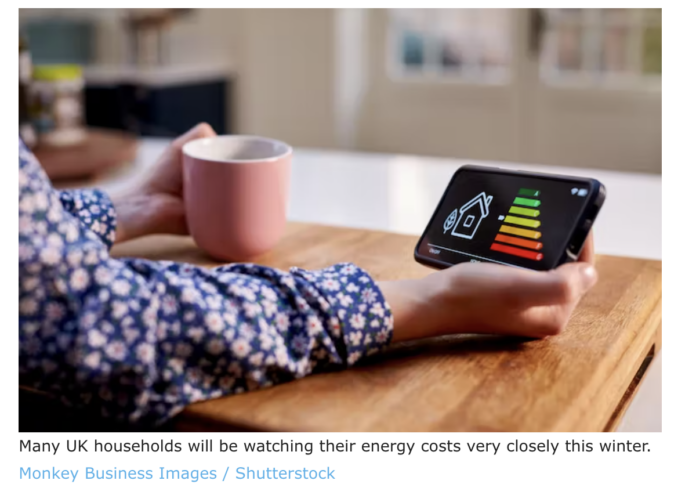 Energy crisis: the UK is still heading for widespread fuel poverty – despite the government’s price cap

Fuel poverty kills thousands of people in the UK each winter. It means being unable to afford to heat a home to a safe and comfortable level, typically when 10% or more of household net income is spent on fuel. It damages our health, wellbeing and educational attainment and makes it hard for people to participate in society and the economy.

For decades, around 10% of UK households, or millions of homes, have been affected by fuel poverty. This year, the cost of living crisis, including a spike in gas prices as a result of Russia’s invasion of Ukraine, has prompted a surge in the number of households struggling to afford heat and electricity.

In October 2021, an estimated 4 million households in the UK were in fuel poverty. But the largest increase in gas and electricity prices ever in April 2022 has pushed a further 2.7 million UK households into fuel poverty, bringing the total number to 6.7 million.

And this was before the government regulator Ofgem announced in August that average energy bills were likely to hit £3,549 by October 2022. Under this scenario, it was estimated that 8.2 million households, or one in three homes, would be in fuel poverty this winter, plunging an additional 1.5 million households into fuel poverty in the space of just six months.

In a bid to stem this crisis, the government recently announced a two-year plan to cap the cost of household energy so the average bill is £2,500 a year. Although much lower than Ofgem’s £3,549-a-year projection, £2,500 still represents a doubling of average energy bills in the space of a year and a £500 increase since April 2022.

The cap is therefore unlikely to significantly reduce the number of households falling into fuel poverty this winter. Those with high energy needs can still expect to pay more than the £2,500 average.

We may not see the number of households in fuel poverty hit the previous projection of 8.9 million, but we can logically expect the figure to remain in excess of the 6.7 million already reached in April 2022. While the government’s response will prevent fuel poverty levels from affecting more than one-third of all households, as was projected prior to the announcement, it will still remain at record levels.

Even with average energy bills frozen at £2,500, many people will continue to think twice about turning on the heating this winter. In fact, research by the Fuel Poverty Research Network suggests that households in or at risk of fuel poverty are likely to take their own action to ensure that their energy bills never get anywhere near £2,500 a year.

As a result, we can expect to attempts at self-disconnection and self-rationing to continue to grow rapidly. Self-disconnection is where households are left without energy services such as heating and electricity because of a lack of funds. Typically associated with prepayment meter customers, self-disconnection can happen when customers forget or are unable to top up their meters.

Self-rationing involves limiting the use of these services for the same reasons, or not buying other important products and services to be able to afford energy costs. Both involve risks to health, wellbeing and quality of life.

Our energy bills are broadly made up of two parts: the cost of buying and supplying the energy we consume, and the green levies that raise revenue to fund the shift towards a low-carbon energy system.

These levies also contribute funding to initiatives designed to alleviate fuel poverty, such as the Warm Homes Discount Scheme that has helped low-income households afford their energy bills in previous years. The government plans to fund its energy crisis plan through borrowing and by temporarily removing green levies from household energy bills.

This means UK taxpayers will eventually foot the bill for repayments via taxes, but as the climate crisis deepens and fuel poverty soars, suspending green levies is also reckless. The transition away from fossil fuels needs to speed up, rather than being paused.

Talk of moving these levies into general taxation sounds progressive, and could be if it means that the higher earners pay more towards the transition. But this is unlikely to come about under a government pledging significant tax cuts.

In addition to the price freeze, the government’s plan also includes proposals to “accelerate domestic energy supply” by increasing UK fossil fuel production. But it is our dependency on fossil fuels that has left us vulnerable to volatile international energy markets in the first place.

The cost of energy from renewable sources has been consistently lower than that produced from fossil fuels throughout the crisis and does not suffer from the same price hikes as oil and gas traded on wholesale markets. The sooner we can transition our electricity system to locally generated renewable heat and power, the sooner we will escape the unpredictability of fossil fuel markets and the emissions these sources produce.

Coupled with the rapid roll out of energy efficiency programmes prioritising the fuel poor, this is the way to end fuel poverty and ensure we never experience a crisis like this again.