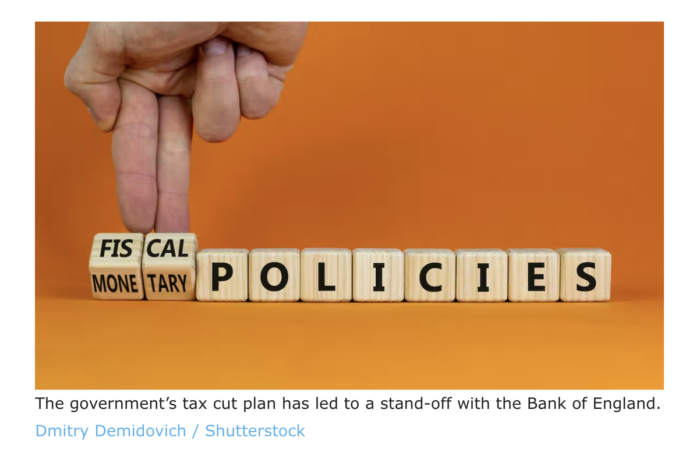 By Campbell Leith, University of Glasgow

The Bank of England has promised to take action to calm the financial market mayhem that has followed the announcement of major tax cuts by the UK government.

The Bank plans to temporarily buy whatever quantity of long-term debt is required to stabilise the cost of government borrowing, which has skyrocketed in response to Chancellor Kwasi Kwarteng’s new economic plan. The difficulty is that the Bank is also expected to further raise interest rates in order to fight inflation, which will also increase the cost of borrowing, making it harder for the government to stick to its plan.

Under normal circumstances, the Bank of England should set interest rates to stabilise inflation over a medium-term time horizon of around two years. When the Bank anticipates that inflation is rising, it can control that by raising interest rates to discourage consumption spending by households and investment by firms. This reduced spending on goods and services is intended to slow the rise in prices.

With the central bank acting in this way, the government is free to conduct fiscal policy in line with its objectives, provided these policies ensure that government debt remains sustainable in the long-run. That is, whatever the mix of taxation and spending chosen by the government, it must ensure that over time it raises enough tax revenues to pay for public expenditure without unsustainable increases in borrowing.

Different governments may make different choices about the size of the state (that is, how much they tax and spends on public services) and whether economic efficiency or equality should be the priority. Regardless, the books must still balance in the long run.

This conventional view relates to “normal” times, however. During the financial crisis and the COVID-19 pandemic, when interest rates were more or less at zero, the Bank of England was forced to engage in unconventional monetary policies such as quantitative easing (printing money to buy government debt) in order to support the economy.

While giving fiscal policy a greater role in supporting the economy in such situations may be appropriate, once the situation begins to normalise the government’s tax and spending decisions should return to being sustainable.

The recent so-called mini budget saw the government take a number of steps that reduced market confidence in its commitment to sound fiscal policy.

The removal of the permanent secretary to the Treasury, Tom Scholar, the suspension of the government’s fiscal rules, failure to accompany the mini-budget with forecasts from the independent Office for Budget Responsibility, and the suggestion by Kwasi Kwarteng in a post-budget interview that more tax cuts were to come, all signalled to the markets that rising debt levels were not a concern for the government.

The government has argued that its tax cuts will “grow the economy”, increasing tax revenues to pay for improved public services. The idea is that tax cuts can motivate workers and entrepreneurs so much that tax revenues rise despite tax rates being lower.

Most economists are unconvinced that these arguments apply, generally, to the UK today, and it is unlikely that any growth will be sufficient to pay for these tax cuts. Various analyses of the mini budget suggest debt will rise as a result of Kwarteng’s measures.

Comments by organisations including the IMF, as well as economists such as Nobel prize-winner Paul Krugman and former US Treasury secretary Larry Summers, say the same thing.

Economic theory also suggests that an alternative combination of monetary and fiscal policy is viable. When the government does not make sufficient effort to raise taxes or reduce public expenditure to stabilise government debt, the central bank can soften its monetary policy, meaning it allows inflation to rise to reduce the value of excess government debt.

A large part of the reduction in debt following the second world war was achieved by a combination of low interest rates and high inflation in the 1960s and 1970s, which reduced the returns to bond holders.

But since the Bank of England was made independent in 1997, the government no longer has any control over how interest rates are set by the central bank. Revoking this independence would be seen as undesirable today, but remains a theoretical possibility.

Instead, the current situation features an independent (as of 1997) Bank of England reaffirming that it will do whatever needs to be done to stabilise inflation. At the same time, the government is relaxing fiscal policy without (yet) publishing a clear plan on how the deficit will be eliminated and the growth in government debt curtailed.

This implies a game of chicken between the Bank of England and the UK government. The Bank is raising interest rates to fight inflation. This also raises the interest payable on government debt, exacerbating the deficit created by tax cuts and further increasing government debt. With UK debt levels at their highest since the second world war, one of these policy makers has to blink and change policy.

Either the Bank of England pulls back from the tightening in monetary policy needed to fight inflation and stabilise the pound, or the government acts to return fiscal policy to a more sustainable footing by at least presenting a credible plan for raising taxes or reducing expenditure.

If there is no clear resolution to this tension, we can expect further volatility in the financial markets as investors try to guess which policy maker will execute a U-turn. The Bank’s current approach of raising rates to fight inflation at the same time as buying government bonds to reduce their interest rate and support financial stability, highlights the dilemma it faces.