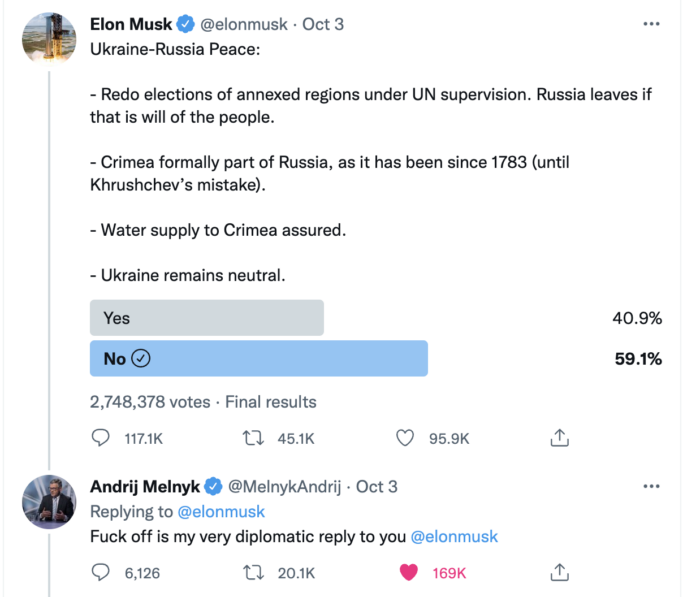 Here’s Belarusian President Alexander Lukashenko, laying down the law in a meeting today with his cabinet:
From [today], all price increases are forbidden. Forbidden! From today. Not from tomorrow, from today. So that prices aren’t driven up in the next 24 hours.
Referencing an “outrageous” 18% measured pace of consumer price increases, the longtime strongman, who has been in office since 1994, made his expectations clear:
The task is to return to an inflation rate of 7%-8% by next year.

Talk about social distancing: Elon Musk cancelled a scheduled deposition by Twitter’s lawyers last week, as part of ongoing litigation related to his efforts to wriggle out of a binding April agreement to buy the so-called microblogging platform for $54.20 per share, a court filing made public yesterday reveals.
By way of rationale for missing that interview, the world’s richest man cited “covid exposure risk,” asserting that one of the plaintiff’s attorneys had brief contact with an individual on Sept. 24 who displayed no symptoms of the virus but tested positive the next day. The Twitter lawyers complained to the judge that, as a “central witness” in the case, the Tesla CEO “is seeking to evade fair examination commensurate with his role in the matters in dispute.”  Musk’s team retorted that the executive made a “reasonable request – consistent with CDC guidelines.”
Of course, that thinking represents quite an evolution, as Musk famously obliged Tesla staffers to continue working onsite as the pandemic raged in full force, defying Alameda County, Calif. regulations in the process. As The Washington Post reported on June 25, 2020, Tesla issued termination notices to multiple employees earlier that month for “failure to return to work,” contravening a May letter from the acting human resources director claiming that “if, at this time, you do not feel comfortable returning to work, you can stay home without penalty.” Perhaps a factor in that decision; the employees in question had appeared at a press conference scrutinizing the electric vehicle giant’s workplace practices a day earlier.
Luckily, Tesla’s boss made good use of his newfound free time. Instead of appearing at last week’s deposition, Musk took to Twitter on Sept. 29 to praise the “good analysis” of individual investor-cum-YouTube personality Gali Filche, who contended that the company’s nascent “Teslabot” and self-driving projects could generate a cool $40 trillion in annual revenue, a sum equivalent to 42% of last year’s global nominal GDP.
Though his myriad business complications would seemingly present more than enough distraction, Musk found the opportunity to don his diplomat’s hat earlier this week. On Monday, he Tweeted a peace plan for the Ukraine-Russia war that suggested that the invaders be allowed to maintain control of the Crimean Peninsula, and that Ukraine abandon its bid to join NATO and pledge to maintain a neutral status in all future conflicts. “This is highly likely to be the outcome in the end – just a question of how many die before then,” he said.
Those musings earned the following response from Andrij Melnyk, Ukraine’s ambassador to Germany: “F*** off is my very diplomatic reply to you. . . now no Ukrainian will EVER buy your f***ing Tesla crap. So, good luck to you.”
Undaunted, the world’s richest man took to Twitter once more overnight to share his latest ruminations: “War is the ultimate Supreme Court.”
Might the time finally be right for a bearish stance on the celebrity CEO and his $750 billion avatar of the post-crisis asset price boom? See the current edition of Grant’s Interest Rate Observer dated Sept. 30 for a skeptical analysis of Musk and Tesla.

Now we’re talking. Reserve Bank Credit dipped by a healthy $45 billion from seven days ago, leaving the Fed’s holdings of interest-bearing assets at $8.73 trillion. That’s down $190 billion from the late March peak.

Stocks came under some renewed pressure after the bullish start to the fourth quarter, as the S&P 500 retreated by 1%, settling near its lowest levels of the session.  Another round of selling pressure in Treasurys was concentrated on the short end, following yesterday’s bear-steepening action, as the two-year yield darted to 4.23% from 4.15% a day ago. WTI crude maintained its momentum by rising to near $89 a barrel, gold held at $1,722 an ounce and the VIX advanced two points to 30.5.
– Philip Grant
Share
Facebook
Twitter
Pinterest
WhatsApp
Subscribe
Login
Please login to comment
0 Comments
Inline Feedbacks
View all comments