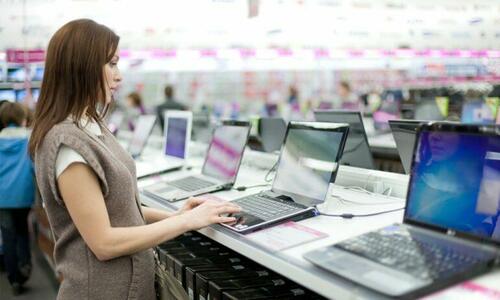 The demand for personal computers in the third quarter dropped 19.5% vs. 1 year ago, marking the steepest decline in more than 20 years, according to the Wall Street Journal, citing research from Gartner Inc.

In the recent quarter, PC manufacturers shipped 68 million computers, down from 84.5 million in the same quarter of 2021 – after elevated pandemic-related sales were followed by a slowdown in consumer spending on electronics, the Journal reports.

“This quarter’s results could mark a historic slowdown for the PC market,” said Gartner analyst Mikako Kitagawa. “While supply chain disruptions have finally eased, high inventory has now become a major issue given weak PC demand in both the consumer and business markets.”

The U.S. market for PCs declined by 17.3% in the third quarter, driven by a slump in laptop sales, according to Gartner. -WSJ

Another data provider, International Data Corp, had less catastrophic figures – reporting a 15% drop in global shipments in the third quarter, with a total of 74.3 million units dispatched.

The PC industry was buoyed during the pandemic from a boom in electronic sales, as both households and businesses scrambled to adapt to technology demands related to work-from-home and remote schooling. And according to the report, those large purchases are hard for consumers to replicate so soon – particularly as inflation forces people to cut back on non-essential spending.

In recent months, PC makers such as Dell and HP have warned of reduced consumer demand – a phenomenon which is now effecting supply chains. For example, AMD cut its revenue forecast for the most recent quarter on Thursday, citing weaker-than-expected PC demand.

The company expects $5.6 billion in sales for the most recent quarter – around $1.1 billion less than it previously expected when it issued a muted outlook in August.