Amazon Implodes More Than 20% After Missing on Revenues, Disappointing On AWS, Catastrophic Guidance 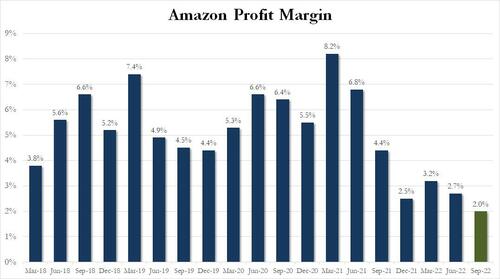 With the bulk of the FAAMG stocks – which is now GAMMA following Facebook’s rebranding to Meta (at least until the company  quietly changes its name back now that the whole Metaverse farce has blown up in its Metaface) – having reported Q3 results (which have uniformly been a disaster, sending megatech stocks tumbling), investors were keenly looking to Amazon and Apple earnings after the close today, to round out the picture for the (former?) market generals and set the tone for the rest of 2022, or at least until after the midterms when the BLS reports that real payrolls were actually -1,000,000, and also to conclude whether the ongoing Nasdaq implosion has been justified.

Focusing on Amazon, investors are expecting Amazon to outperform digital advertising peers Facebook and Google through an ad slump. The theory, as Bloomberg notes, is Amazon is closer to the customer at the time they are prepared to buy something, so that advertising is more valuable when consumers are penny-pinching when compared to broader marketing campaigns aimed at awareness on social-media sites like Instagram or Google’s search engine where users aren’t necessarily shopping.

Investors also expect a slight slowdown in Amazon Web Services sales growth (thank you Microsoft and Google), with third-quarter revenues expected to come in at $21 billion, up 30% from a year earlier. Cloud-industry peer Microsoft reported earlier this week that rising energy prices cut into cloud computing profits, so there will likely be some focus on Amazon’s cloud profit margins as well to see if they are under similar pressure. Investors expect operating income of $6.1 billion in the third quarter from Amazon’s cloud business.

Poonam Goyal, senior retail industry analyst for Bloomberg Intelligence, and Anurag Rana, BI’s senior software analyst, point to Microsoft’s projection of a slowdown as a harbinger for AWS. “Amazon Web Services’ sales growth in constant currency could dip in 4Q to about 26%-27% from consensus of 29%,” they wrote in a recent note. “The slump is probably going to stretch through 2023, with recovery possible in 2024.”

Amazon’s employee count will also be an interesting metric to watch. The company has been busy cutting some experimental projects, which would reduce its numbers, but it also announced plans to hire 150,000 people for the holidays, which is the same as last year. As of June 30, Amazon had 1.52 million employees globally. If that figure goes down, it will be the first time Amazon has reduced its number of employees for two consecutive quarters since 2001 and gives a clearer picture of how deep the cuts have been.

But while Q3 earnings will matter, all eyes will likely be on the forecast for the busy holiday quarter. Investors expect earnings of 39 cents per share on sales of $156 billion. Investors are counting on Amazon to boost profits and sales while trimming costs through hiring freezes and cutting experimental projects.

That said, like the rest of the tech sector, rising labor and energy costs coupled with slower spending growth have put a strain on Amazon’s business model. Amazon CEO Andy Jassy has taken several steps this year to boost revenues, including increasing the price of Prime membership and tacking new fees on merchants selling goods on the web store. Investors want to see if Amazon can maintain that strong connection with Prime subscribers and win their spending during the holidays, or if more expensive Prime membership compels them to shop elsewhere.

Heading into earning, Amazon shares suffered steep declines, falling as much as 5.1%. The e-commerce giant’s shares are down 8.5% over the past two days, the worst two-day slump since June.

So with all that in mind moments ago AMZN just reported Q3 results which were an absolute disaster and nailed the coffin of the FAAMGs shut, because not only did Amzn miss sales, and report disappointing AQS metrics but its forecast was a disaster.

But while revenue was disappointing and AWS was subpar at best, the reason why AMZN stock is imploding after hours is because the company’s guidance was absolutely catastrophic

Digging into the numbers we find that operating margins tumbled to 2.0%, down from 4.0% and missing the estimate of 2.5%. In fact as shown below, the only reason this number wasn’t positive is thanks to AWS.

And while the market was not happy with the overall profit margin, it was even less enthused with the profit margin breakdown where despite a modest improvement in AWS, the international operating margin collapsed to the lowest in the past decade, with US online sales still unable to turn green. In fact, if it wasn’t for AWS, AMZN would have negative operating income. 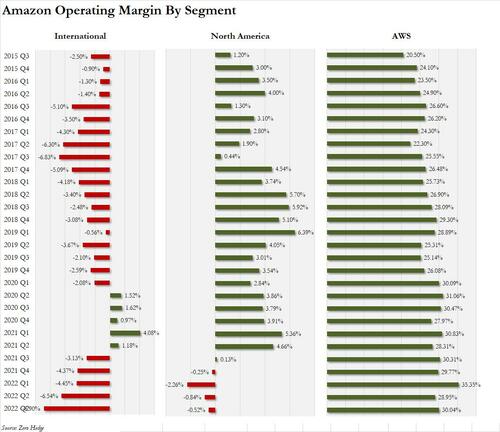 The chart above shows that Amazon’s online retail business in North America and international both lost money. This is after hiking the cost of Amazon Prime $20 a year and adding fees to online merchants that sell on the platform. If Amazon Web Services is subsidizing the e-commerce side, it makes it harder to justify keeping the businesses together.

And while AWS did post a modest improvement in profit margins, where it did disappoint was in revenue growth, which rose 27% Y/Y to $20.54 billion, missing the estimate of $21.01 billion. 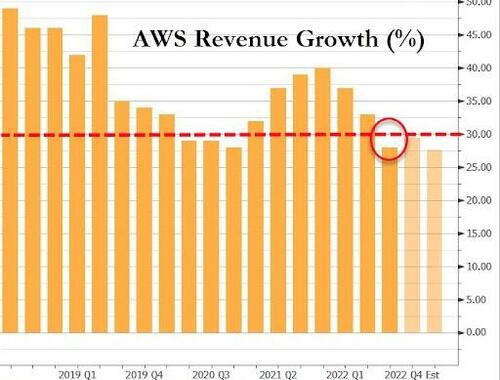 But all these disappointing data points aside, what markets are mostly focused on is that forecast revenue growth in a range of $140-$148BN (midline at $144BN) suggests that very soon the company may see an unheard of event: shrinking revenues! 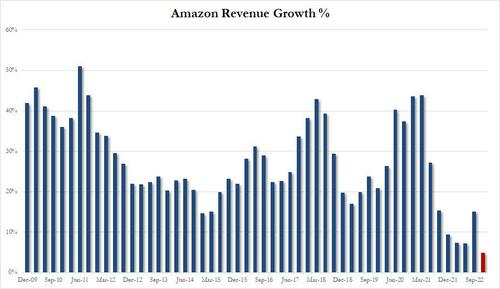 As Bloomberg puts it, the results will ramp up pressure for CEO Andy Jassy – and all the other tech giants – to further cut costs. Amazon has a hiring freeze in its retail team and has been cutting experimental projects. But investors will be hungry for deeper cuts if sales are falling flat.

And speaking of Bloomberg, BBG Intel’s Poonam Goyal was rather adamant “It’s actually pretty bad across the board. It’s hard to find something good in this press release….It’s kind of humming the same tune of results we saw earlier. The consumer is slowing.”

In light of these catastrophic earnings and terrible guidance, it is not surprising that the kneejerk reaction may have been the worst in post-earnings plunge Amazon history: the stock was down as much as 21% after hours, plunging to the lowest level since the March 2020 covid crash when the entire economy was locked down! 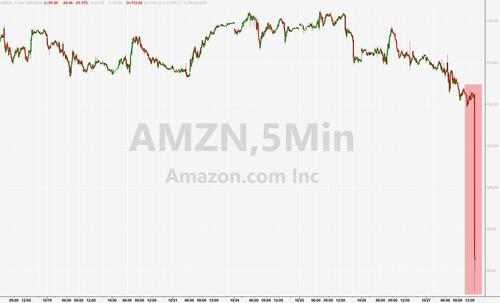 Not surprisingly, Wayfair and EBay shares are falling postmarket after Amazon’s forecast miss. Wayfair is down as much as 6.2% while EBay declines as much as 3.6%. Alibaba is down 1.7%.