Rising unemployment: economists sometimes say it’s good for the economy, but are they right? 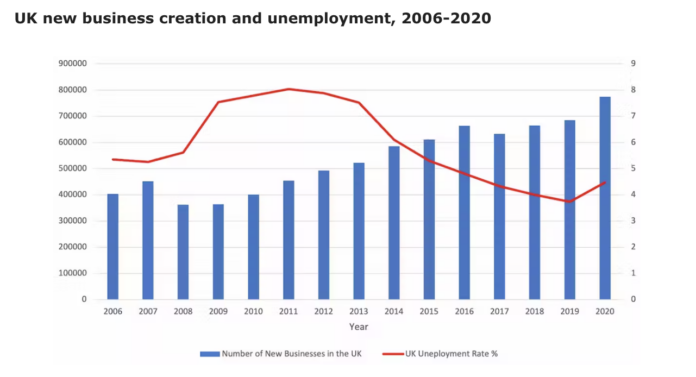 Rising unemployment: economists sometimes say it’s good for the economy, but are they right?

Signs of a global economic downturn are growing by the day. Inflation is still going up, debt is up and interest rates are up, which means that projections for growth are down. Put simply, the proverbial something is close to hitting the fan.

Business closures and job losses are likely to become another hurdle for the global economy – and that points to rising unemployment. Yet, while most people would think of rising unemployment as a bad thing, some economists don’t entirely agree.

Economists have long pointed to a counterintuitive positive relationship between unemployment and entrepreneurship, born of the fact that people who lose their job often start businesses. This is often referred to within economic literature as necessity-based or push-factor entrepreneurship.

Where it gets tricky

There is certainly good evidence for the existence of this contradictory relationship. The graph below shows the rates of UK business creation in blue and unemployment in red. As you can see, unemployment started to increase during the global financial crisis of 2007-09 and business creation followed not long after.

This relationship between business creation and unemployment has previously been used by some as a justification for cold social policies towards the unemployed on the rationale that “the market fixes itself” in the long run. They see business closures and job losses not as human miseries that require government help, but necessary evils that are needed to reallocate the money, people and other resources back into the economy in more efficient ways .

But my latest research has found that rising unemployment is not quite the silver bullet for reigniting the economic engine that it’s cracked up to be. I looked at 148 regions across Europe from 2008 to 2017. Although I did find evidence that unemployment can stimulate business creation over time, this only seems to happen in higher performing regions within higher performing economies such as the Netherlands, Finland and Austria.

The reason why higher performing regions in wealthier areas have a positive relationship between job losses and business creation is that they enjoy what are known as “urbanisation economies”. These are positive benefits derived from the scale and density of economic activity occurring within that area, including wider arrays of services, greater pools of customers and greater numbers of transactions relative to other areas of the economy.

For example, a firm located in a capital city like London will benefit from more abundant access to consumers, suppliers and lenders as well as larger labour pools. The higher population density in these areas also makes it more likely that firms and workers will learn faster as they observe the activities of their many neighbours. In more peripheral areas with fewer of these characteristics, the opposite is true. This is why unemployment affects different places differently.

One consequence is that economists need to stop explaining how economies perform differently based solely on national factors. And it’s not just unemployment where this becomes apparent. For example, Ireland’s longstanding low rate of corporation tax (12.5%) has been cited as a reason for its high foreign direct investment, which accounts for roughly 20% of private sector employment.

Yet while just over 43% of all Irish enterprises in 2020 were located in either Dublin or Cork, counties like Leitrim in the north accounted for fewer than 1% of enterprises. So while national measures can help induce entrepreneurship and increase the overall size of the pie, the pie is shared very unequally. Just as rising unemployment can benefit some areas while hindering others, the same is true of government interventions.

We therefore need to stop viewing the free market and government intervention as either wrong or right. In some contexts one is going to be more helpful, while in other contexts it will be the opposite. Recognising this reality would improve on much of the polarised debate in politics and economics, in which those on the right can come across as cold and ignorant, while those on the left can seem self-righteous and sanctimonious, viewing capitalism and markets as dirty words.

How does this apply to today’s gathering downturn? It would make sense for governments to prioritise supporting businesses in more peripheral regions, while leaving those in wealthier urban areas to fend for themselves.

The famous economist John Kenneth Galbraith gave what I believe to be one of the best pieces of commentary on this topic, saying:

Where the market works, I’m for that. Where government is necessary, I’m for that … I’m in favour of whatever works in the particular case.

If we are to survive this upcoming recession and get things going again, we are going to need to acknowledge that centralised “one-size-fits-all” policies won’t be useful everywhere. The solutions to economic recovery are in some cases government intervention and in others the free market, but not always one or the other.