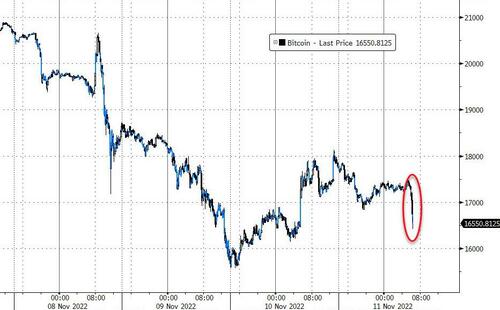 Update (1250ET): While you don’t have to throw a stone too far to find people that are pissed off at Bankman-Fried, Binance strategy chief Partick Hillman has more than few choice words for the Dem-Darling crypto once-billionaire…

“This is the direct result of a rogue actor breaking every single basic rule of fiscal responsibility,” Hillmann said in a statement to the Wall Street Journal.

“While the rest of the industry operates under an extreme measure of scrutiny, the cult of personality shrouding FTX allowed them a dangerous level of privilege that wasn’t earned,” he added.

Notably, Binance has long complained that it has received more scrutiny, including from the media, than FTX.

As widely expected, FTX – which was clearly insolvent after the biggest fraud in crypto history – has filed for bankruptcy, and its soon-to-be incarcerated boss Sam Bankman-Fried, f/k/a “the JPMorgan of his generation”, has resigned as CEO. SBF is being replaced with John J. Ray, III – the lawyer who helped clean up Enron – as incoming CEO.

In addition to FTX, approximately 130 additional affiliated companies (together, the “FTX Group”), have commenced voluntary proceedings under Chapter.

Wait, 130? Yup: as the following org chart shows that may be conservative (although it’s not as crazy as it appears at first sight as it mostly accounts for every country the company operates in).

The company listed between $10 and $50BN in assets and liabilities spread among 100,000+ creditors.

Entities tied to FTX.com, FTX US and trading firm Alameda Research Ltd. were part of the filings, according to a Twitter statement Friday. Chapter 11 bankruptcy lets a company continue operating while it works out a plan to repay creditors.

FTX Trading Ltd. (d.b.a. FTX.com), announced today that it, West Realm Shires Services Inc. (d.b.a. FTX US), Alameda Research Ltd. and approximately 130 additional affiliated companies (together, the “FTX Group”), have commenced voluntary proceedings under Chapter 11 of the United States Bankruptcy Code in the District of Delaware in order to begin an orderly process to review and monetize assets for the benefit of all global stakeholders.

“The immediate relief of Chapter 11 is appropriate to provide the FTX Group the opportunity to assess its situation and develop a process to maximize recoveries for stakeholders,” said Mr. Ray. “The FTX Group has valuable assets that can only be effectively administered in an organized, joint process. I want to ensure every employee, customer, creditor, contract party, stockholder, investor, governmental authority and other stakeholder that we are going to conduct this effort with diligence, thoroughness and transparency. Stakeholders should understand that events have been fast-moving and the new team is engaged only recently. Stakeholders should review the materials filed on the docket of the proceedings over the coming days for more information.”

The news sparked the latest bout of selling in crypto which is back under $17,000 unable to stage even a modest bounce amid the relentless negative newsflow…

And the price FTX Token (FTT) is tumbling…

Today, I filed FTX, FTX US, and Alameda for voluntary Chapter 11 proceedings in the US.

I’m really sorry, again, that we ended up here.

Hopefully things can find a way to recover. Hopefully this can bring some amount of transparency, trust, and governance to them.

Ultimately hopefully it can be better for customers.

This doesn’t necessarily have to mean the end for the companies or their ability to provide value and funds to their customers chiefly, and can be consistent with other routes.

Ultimately I’m optimistic that Mr. Ray and others can help provide whatever is best.

I’m going to work on giving clarity on where things are in terms of user recovery ASAP.

I’m piecing together all of the details, but I was shocked to see things unravel the way they did earlier this week.

I will, soon, write up a more complete post on the play by play, but I want to make sure that I get it right when I do.