Hiring Is Finally Getting Easier For Small Businesses 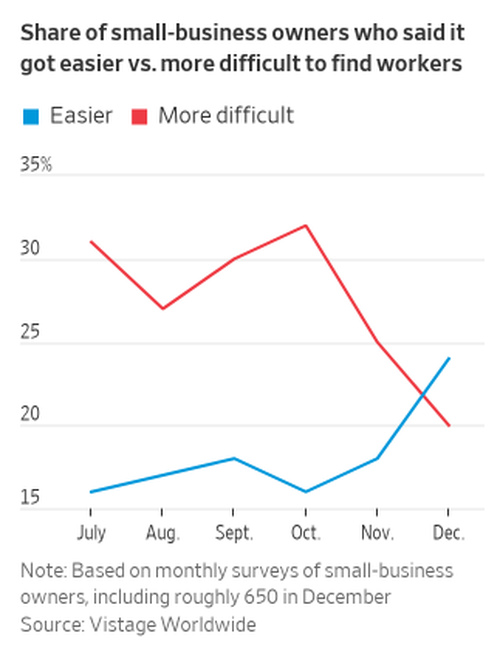 The residual hiring drought that occurred as a result of the government’s genius plan to literally pay people to stay home and do nothing during the pandemic looks to finally be passing, according to small business owners.

Several small business owners were profiled by the Wall Street Journal this week and described a once-difficult hiring climate (where, you guessed it, no one wanted to come back to work) as easing.

Chief Executive Officer of UnaliWear, Inc., Jean Anne Booth told the WSJ about the hiring climate over the last year: “They would ghost us. They would accept the job, show up one week, and never show up again.” This fall they increased the starting pay they were offering and say that now, “for the first time in a while”, they are “fully staffed”.

Surveys show that the easing appears to be consistent across industries:

Nearly 25% of the more than 650 entrepreneurs in the December survey said it was easier to fill job openings now than at the start of 2022—an increase from 18% in November. Meanwhile, 20% said it was harder to fill open positions, down from 25% in November. The survey is conducted for the Journal by Vistage Worldwide Inc., a business-coaching and peer-advisory firm.

Dale Lemmons, owner of Signature Transport Inc. and Interstate Wood Products Inc., told The Journal: “We have seen it be a little easier, mostly because some of our competitors are slowing down. It’s not quite the hot job market it was.”

His company has boosted pay for entry level drivers by 20% and by 40% for drivers with at least 3 years of experience. The pay hikes have helped entice talent and retain drivers: he has seen about 25 of his workers go through a paid apprenticeship program and 7 additional employees are in training.

Chip Ridge, president of Millennial Title in Louisville, Ky., is also optimistic, telling The Journal: “There’s a lot of pretty high-level talent in our industry that’s being displaced as part of this shift in the economy. There’s potentially an opportunity for us to acquire some really experienced talent that in a normalized market we would never have the opportunity to get.”

“There were definitely more candidates, but we’re still not seeing the right candidates,” said another small business owner in East Brunswick, New Jersey.

One industry that has definitely seen hiring get easier has been restaurants and bars, which we wrote about just days ago after the WSJ profiled that industry specifically. Restaurants and bars have “nearly doubled” their employee counts from the pandemic lows in April 2020, the note said. The industry added 62,000 jobs over the past month alone.

However, one must also keep in mind that, as we have been saying for months, these are usually the first stops for people working 9 to 5 salaried jobs who have been laid off due to the Fed’s cohesive and calculated plans to strategically napalm the U.S. economy in order to get inflation lower.

Nevertheless, many recent hires are “returning to the restaurant industry after forsaking it earlier in the pandemic’ the report says. It’s amazing what happens when your newfangled crypto trading empire, established some time between 2020 and 2022, goes bust when its top two positions – dogecoin and Tesla call options – turn out to be worthless.