Why does Nepal’s aviation industry have safety issues? An expert explains 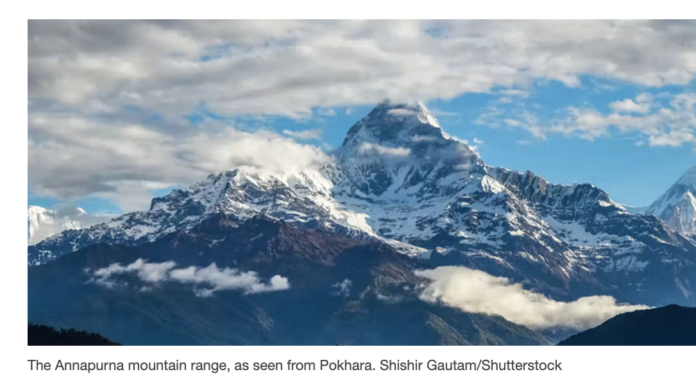 Why does Nepal’s aviation industry have safety issues? An expert explains

A Yeti Airlines ATR 72-500 aircraft crashed in Pokhara in central Nepal on January 15 2023, killing at least 68 passengers on board. The aircraft was en route from Nepal’s capital Kathmandu to Pokhara, the country’s second largest city, situated under the picturesque Annapurna mountain range.

While the picturesque landscape of the country appeals to tourists, it poses significant challenges to aviation operators, who need to embrace and navigate the challenging environment.

The air crash on Sunday was Nepal’s worst aviation disaster since 1992. The country has been working to overcome its challenges in aviation.

Authorities confirm there have been no survivors from Yeti Airlines flight YT691. The government has called an emergency meeting of the cabinet following the accident near Pokhara Airport that killed all 72 on board. https://t.co/xVoH4NK9gz https://t.co/UljpCQLT4l pic.twitter.com/WilYCeSJ8c

Nepal, situated between India and China, is home to eight of the world’s 14 highest mountains, including Mount Everest or Sagarmāthā. For flight operations, it’s an almost unrivalled, harsh environment with sudden weather changes that can make for hazardous conditions.

Airports built in mountainous regions often need to have shorter runways that can only accommodate turboprop-powered regional aircraft, rather than large jet airliners that can access larger cities in Nepal.

As a result, aviation carriers in Nepal have a variety of aircraft on their fleets. These craft vary in condition, presenting potential safety hazards.

The ATR 72 aircraft is one typical aircraft used by Nepali carriers. It is a turboprop-powered regional aircraft with a capacity between 44 and 78 passengers. These aircraft are manufactured by a joint venture of Airbus in France and Leonardo in Italy.

The aircraft involved in this crash had been in service for 15 years, a fairly typical age for an aircraft.

The final report on what happened to the tragic Yeti Airlines flight will take over a month to complete.

A growing and fast-changing industry

Nepal has welcomed private investment into its aviation sector since 1992. Yeti Airlines is one of 20 domestic carriers. The airline, headquartered in Kathmandu, flies to ten domestic destinations using ATR 72-500 aircraft. In addition, 29 international airlines operate into Nepal’s capital too.

With air travel in Nepal becoming more accessible and affordable, airport infrastructure development has remained far behind compared to the growth of air traffic. This has resulted in increasing congestion at airports, fare competition between airlines, and decreased safety records.

In fact, the country has recorded at least 350 casualties associated with aeroplanes or helicopters since 2000, which has raised questions about the effectiveness of its aviation safety regulations.

The aviation regulator in charge is the Civil Aviation Authority of Nepal, a government agency established in 1998.

Nepal became a member of the UN’s International Civil Aviation Organisation (ICAO) in 1960. This membership obliges the country to abide by international conventions, ICAO’s regulations, standards, and recommended practices in aviation safety.

While Nepal’s aviation industry has made significant efforts to improve safety, unfortunately the safety record still doesn’t match up with the requirements of other civil aviation authorities.

In particular, the European Union banned all Nepali airlines from operating in the bloc’s airspace in 2013 after ICAO raised a red flag. That ban still hasn’t been lifted, and Nepal remains on the EU Air Safety List.

Despite the tragic casualty record, Nepal has stepped up its efforts to improve aviation safety. The Civil Aviation Authority of Nepal has been focusing on improving safety in Nepali aviation – such as building improvements at airports, upgrading safety equipment, and fostering a positive safety culture by encouraging hazard reporting.

Nepal’s considerable improvement in safety measures and compliance with international standards was recognised by ICAO in 2018. However, the country must continue work on its aviation reform to make its skies safe for everyone.