US Consumer Demand Off a Cliff as the Crisis Deepens

US Consumer Demand Off a Cliff as the Crisis Deepens

As we said, we would be taking a closer look behind the headline GDP numbers recently released. The advantage of procrastination is that eventually a capable person will chart up the data which you have been studying. So thank you to ContraryInvestor for his excellent charts. His site is among the best, and we read it regularly.

The big story is the collapse of the US consumer, unprecedented since WW II, and possibly the Great Depression. This is apparent in the numbers despite the epic restatement of GDP having just been done by the BLS in their benchmark revisions.

If the Fed and Treasury were not actively monetizing everything in sight, we would certainly be seeing a more pronounced deflation as prices fall WITH demand. And if they continue, we may very well feel a touch of the lash of that hyperinflation that John Williams is predicting. We still think a stiff stagflation is more likely, but are allowing that the Fed and Treasury may indeed be ‘just that dumb enough’ to trigger something less probable.

Until the consumer returns to some semblance of health, there will be no sustained recovery. It really is that simple. 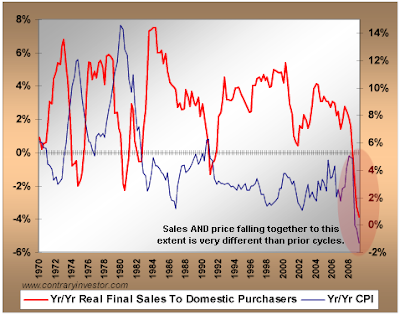 The Fed will have to stop artificially draining credit supply by paying such a high rate of interest on reserves. They know this. It will stimulate lending, even to less worthy borrowers. But this is not a cure. It is one of the paths to more inflation, fresh asset bubbles, and the devaluation of the dollar. And ‘stimulus’ handouts are no better. Healthcare reform is a step in the right direction. The US consumer pays far too much for the same (or less) level of care in most of the developed nations. But that is not enough. 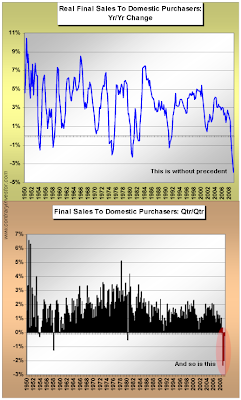 The cure will be to increase the median wage, and to stop the transfer of the national income to fewer and fewer hands. For that is how the system is set up today. It is not the result of ‘free markets’ but a sustained transfer of wealth through regulatory and tax policies, and a pernicious corruption of the nation most significantly starting in 1980, although a case has been made for 1913.

It is an ironic echo that our current over-his-head badly advised President seeks to place more and broader powers into the hands of the Federal Reserve and its owners, the banks, in the spirit of Woodrow Wilson. 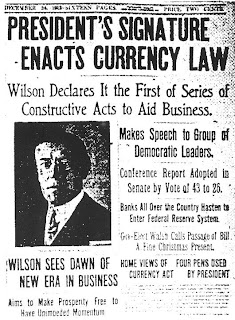 Obama needs to bring in fresh thinking. Volcker and Stiglitz would be a step in the right direction, but it is ironic that they are much older than the Bobsey twins, Geithner and Summers. Bobsey being, of course, Bob Rubin. They should be sacked.

The problem as we see it is that Obama is hopelessly over his head, and failing badly. His stump speeches to admiring crowds, as the most recent in Elkhart, Indiana, ring increasingly hollow. Granted his situation is difficult to say the least. He reminds us increasingly of Jack Kennedy in his first year in office, and his manipulation by ‘handpicked advisors.’ Remember the Bay of Pigs? He did manage to find his own voice, and was beginning to make his own way. There is still some hope that Obama can find his, but the trend is not hopeful.

Look for several third party candidates to rise in the next election, as both the Democrats and the Republicans fail to deliver an honest performance for the country. The problem is that at least one of them will be a toxic choice, probably the one that is most narrowly financed.

It does not look hopeful at this moment in history. But tomorrow is another day.