This is crazy, unless we’re refunding everyone who lost money, jobs, houses, retirement funds, etc, by clawing money back from those who recklessly or negligently contributed to the financial meltdown. Unfortunately, it’s not much crazier than some other government programs over the last year. Any Senator supporting this repulsive plan (Senators Richard Shelby and Bob Corker) should be voted out asap. My yellow highlights. – Ilene 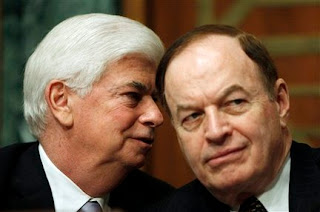 These are, by and large, relatively well-to-do people who were considered ‘qualified investors,’ or ought to have been. They were able to place large sums of money in obviously risky investments seeking abnormally high rates of return, which they did receive for many years.

The notion that the government should retroactively cover their losses, even indirectly, by taxing the public is obviously repugnant.

What about the many who have lost, on a percentage basis, equally if not more devastating amounts of their retirement savings in the tech, housing and credit bubbles? Their only fault is that they lack the political connections and high powered lawyers to make the case for them to the Congress, and the influence to get their way from pliable Congressmen.

I feel mightily sorry for anyone who has lost money in these fraudulent markets. I spend quite a bit of my personal time trying to warn people about the snares and pitfalls that are allowed to continue in the US financial markets even today. And there are many of them. Consumer Protection is not a priority in Washington.

A better case might be made to sue the Wall Street exchanges, the private self-regulators, and the auditors and ratings agencies for gross negligence in allowing these frauds to continue for so many years. Prosecutions for fraud and corruption across a much wider circle of enablers is generally what is done. It was done in the 1930’s and it was done after the Savings and Loan Scandal.

But that will not happen. The financial sector is contributing far too much to the politicians in Washington, and too many powerful politicians are beholden to them, despite what smooth words that might pass their lips in public.

To take the losses of wealthier investors from hedge funds and other high risk investments having no productive benefit or socially redeeming value, and socialize them to the many is almost unbelievable.

And the backing of Senators Richard Shelby and Bob Corker for this is just another sign of the disgraceful corruption and patronage to a select few that infests the Finance Committee in the Senate. These are the Senators on the Finance Committe, among others, who are blocking and weakening financial reform. What hypocrites!

March 10 (Bloomberg) — Victims of Bernard Madoff and accused Ponzi schemer R. Allen Stanford are banding together to lobby Congress for a law that could require Wall Street firms to pay billions of dollars to cover some of the losses they suffered.

As the groups’ leaders walked the Capitol halls separately over the past several months, they learned how to find the Senate’s Dirksen Office Building and to call their proposal “revenue neutral,” meaning no cost to taxpayers. 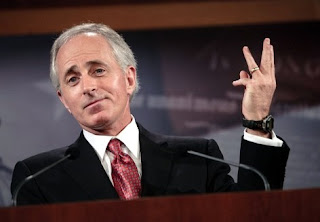 They also gleaned another lesson: The broader the geographic base of support, the better the chance of legislative success. The result is a coalition of the Democratic-backed, East Coast, and mostly Jewish investors defrauded by Madoff, with the Republican-backed, largely Christian, Sunbelt residents victimized by Stanford. The disparate groups now find themselves bound by a common notion: They’ve been cheated, and they want the government to make them whole….

The lobbying initiative “gives new meaning to the word chutzpah,” said James Cox, a professor at Duke University School of Law. “This is just a tax increase. It’s levied on banks but customers end up paying.” Until recently, the two groups were going at it alone, and not winning much support except from lawmakers in their regions.

Shaw’s Stanford group had backing from Richard Shelby of Alabama, the senior Republican on the Senate Banking Committee, and other panel Republicans like Bob Corker of Tennessee, David Vitter of Louisiana and Kay Bailey Hutchison of Texas, said Shaw, who also works part-time as a spokeswoman at the Federal Reserve Bank of Dallas.

“These are very Christian” people, Shaw said, referring to the Stanford victims. A lot of members were marketed the Stanford securities “at church…”