Second coming of the calm before the storm; fear not, there's time to find shelter. – Ilene

This is a brief article of where the pharmaceutical industry has been, and where it could be headed in the near future.  In contrast to past articles where I focused on the pipelines of GSK, LLY, MRK, BMY and ‘biotechs’ GENZ, GILD, and others, this is a summary of the industry.  The overall market continues its grind up and I am gun-shy of its continued direction, but with the passage of the health care bill, biotechs that serve niche markets will be well positioned to see a rise both in stock price and potential M&A activity.  In addition, as noted on Friday, March 19th on the laggers/leaders of the past month or so, Telecom and Healthcare were at the bottom of the pile.  For the review of Big Pharma and some biotech picks at the end, generic companies are excluded from most data (Merck KGaA, Mylan, Teva and Watson).

From 2002 to 2009, the top pharmaceutical companies by sales had growth rates greater than 12% (compounded annually).  Unfortunately, this growth is not sustainable and should move towards flat to nominal growth by 2014.  The growth decline will challenge these companies to seek more profitable routes, including licensing and acquisitions.  Picking the right companies based upon the science is at the forefront of good investing.  Not they will all succeed because the science is sound, but understanding the molecule, target, and the disease helps guide smart decisions.  Good management helps as well!

Let's start with a summary of potential acquirers.  Table 1 is a list of the 15 largest pharmaceutical and biotech companies ranked by healthcare revenue.  Some companies (e.g., Bayer and Johnson) have additional revenue which is not included the sales data.

In recent years, the pharmaceutical industry revenue growth has slowed for several reasons, including:

As of September 2009, Morningstar’s pipeline scores (link here) combine the number of drugs under development of each company and weigh drug candidates by market potential, launch timing, and probability of approval.  GlaxoSmithKline leads the group as the company holds a very high number of near-term product launches, including human papillomavirus vaccine Cervarix and several new cancer drugs (I said it in August 2009).  On the flip side, Abbott's (ABT) pipeline is relatively weak (and I noted this in a past write-up as well), and it is anticipated the firm will attempt to enhance it in the near future through targeted acquisitions and licensing.  Further I noted many times in my write-ups that NVS and MRK have great pipelines.  I disagree with Morningstar’s pipeline score with Pfizer, as I believe they have overpaid for Wyeth and not focused enough on the science behind the pipeline (internal or otherwise).

So why is Pfizer in for stormy weather?

For now, Pfizer's drug portfolio is unmatched in terms of breadth and depth in the global drug market due to its acquisitions of with Warner-Lambert (2000) (Lipitor), with Pharmacia (2003) (Celebrex), and now Wyeth (2009).  The trend has been clearly BUY the pipeline.

Principal cardiovascular drugs include Lipitor, the world's largest-selling cholesterol-lowering agent as well as the biggest drug in any therapeutic category in 2009 (sales of $11.4 billion),antihypertensives such as off-patent Norvasc ($2.0 billion), and Caduet ($548 million), a combination of Lipitor and Norvasc.  Key central nervous system medicines include Lyrica, a treatment for nerve pain and epileptic seizures ($2.8 billion); and Geodon, an antipsychotic ($1.0 billion).  The infectious disease area consist of Zyvox ($1.1 billion) and Vfend ($743 million), an anti-fungal.  Other key drugs sold include Celebrex COX-2 inhibitor for arthritis and pain (sales of $2.4 billion); Viagra for male erectile dysfunction ($1.9 billion); Xalatan/Xalcom, for glaucoma ($1.7 billion); Detrol and LA/Detrol, treatments for incontinence ($1.2 billion); Sutent ($964 million) for kidney and other cancers; Genotropin ($887 million), a human growth hormone; and Chantix ($700 million) for smoking cessation.  Non-US sales accounted for 57% of total revenues in 2009.  The animal health division ($2.8 billion) offers one of the largest-selling and broadest product lines in its field.  Other products include feed additives, vaccines, antibiotics, antihelmintics, and other veterinary products.

After Wyeth is incorporated for a full year, projected revenues should climb to $68B in 2010, from 2009's adjusted $50B.  Growth should be in several areas including Lyrica, Zyvox, Sutent, Celebrex and Geodon.  On the Wyeth growth drivers, Prevnar vaccines and Enbrel should increase.  Enbrel, though, is aTNF inhibitor and this competes against Remicade from JNJ and Humira from Abbott.  I believe there is a price war breaking out, so the revenues should grow, but profits may be sacrificed.

So what gives with Pfizer?  First, every compound that makes it into clinic (Phase I through Phase III) is destined to fail.  Once in clinic, roughly 1 in 10 compounds makes it to market (I think the stats are getting worse, but I do not have the most recent).  To discover 1 compound, Pharma goes through 3,000-20,000 compounds (if it is a small molecule like Lipitor).  Monoclonal antibodies and other biologics are much less, but the production and testing is rigorous, long, and they a very different attrition rate that I will not cover here.  Thus, my problem with the PFE pipeline is as follows:  PFE had 100 compounds (some are monoclonal antibodies) in the pipe in 2009 and currently, with the WYE addition, has 133 in 2010.  Thus, 13 should make it to market!  While this looks great because of the merger, they acquired WYE, for $68B, and PFE only has 33 more drugs in the clinic?  That is $2B/compound!  Smaller companies can develop a compound for clinic for ~$20M.  If a smaller company can do that 100 times, then by the laws of averages, they should have 10 compounds one the market for $2B.  Further, with the failure of drugs from Medivation, Neurocrine, Exubera (inhaled insulin) and other big named programs in the past few years, it makes me wonder what the heck they are doing when they sign these big deals.  I am oversimplifying the costs to market, but I am trying to make a point on efficiencies and innovations of smaller companies.  Something PFE lacks, but NVS, MRK, GSK, and others use a balanced approach to drug discovery.  It is all about the science. (Oh, and they have 40B in debt.  Those drugs better pay off.) 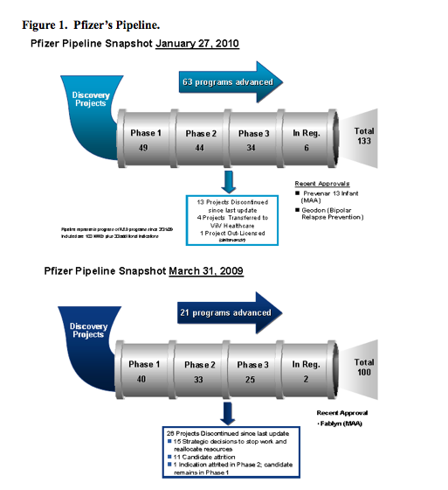 The rest of Pharma is awash in cash, and M&A is a powerful tool for improving operating profits (oh, and laying-off lots of people).  You can bet that Big Pharma is GOING to use M&A and layoffs as their strategies (layoffs have already started with the mergers and AstraZeneca).  With recovery from the global economic downturn, and the passage of the health care act of 2010, M&A deals will be increasing.  As the mega-mergers made a comeback in 2009 (each worth over $40 billion: Pfizer-Wyeth, Merck-Schering-Plough and Roche-Genentech), smaller deals are right around the corner.  M&A, though, cannot totally offset falling sales from the impending 2012 patent cliff, but the M&As can improve the profitability associated with greater sales (co-branding products like Vytorin, Caduet, etc), it can create a cost-saving opportunity (layoffs).  In the end, some combination of the two will ensure Pharma’s continued relationship with M&A, and I believe it will even be greater importance in the coming years.

So, which companies might be acquired?  Using Table 4, I see several companies that could be targets, including the biggest fish Amgen and BMY, smaller fish Genzyme, Biogen Idec (Ican wants to sell them to someone), and BioMarin.  Amylin (Ichan would like to sell them to someone as well) is in bed with Lilly, so they could be a target for the right price, but they remain in a tough spot due to the pricing pressures and clinical outcome studies against the DPP-IV small molecules on the market (Januvia) or ones rolling through the pipelines (e.g., Takeda).  Orphan indications (this includes cancer) and Immunological disorders are going to be the real drivers of future growth, so companies that focus on these areas should do fairly well given sound science rationale.

JnJ is always on the lookout for more as they bought Cougar last year, and BMY and Amgen are a potential targets for them JnJ hopes to expand its Pharma, and it is good at buying.  However, its research unit is less than stellar.  Others worth considering are Spectrum, Ariad, Curis, Vertex, Savient, and even Shire.  Stay tuned for further readings on the companies noted above for potential entries over the coming weeks in member chat.

If you can’t see the images in this post, please let me know. Thanks – Ilene

Great!  I’m down to one technique – screen shots – that appears to work across various computers/operating systems or whatever it is that makes the difference. – Ilene