In yet another sign the economy is cooling substantially, three components of the June Services ISM are now in contraction, with the overall index declining much faster than economists expected. 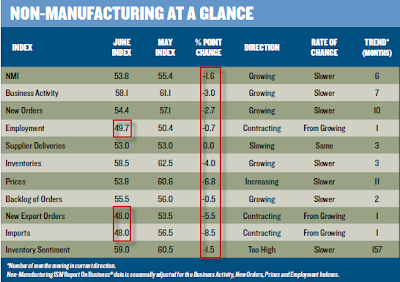 Employment activity in the nonmanufacturing sector contracted in June after one month of growth. ISM’s Non-Manufacturing Employment Index for June registered 49.7 percent.

Orders and requests for services and other non-manufacturing activities to be provided outside of the United States by domestically based personnel contracted in June after three consecutive months of growth.

The above link also contains the Manufacturing ISM. 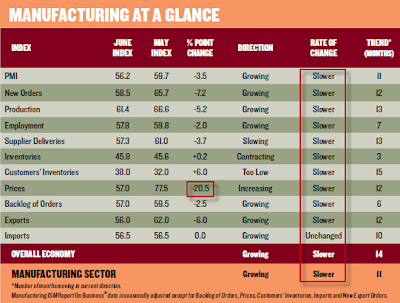 Recovery Withers on the Vine

There is really not much to like in either of the ISM reports.

You should not have to be a genius to figure out the rebound in manufacturing was a result of four factors now withering on the vine.

Is Europe going to lead the world recovery? China? US Consumers?

The answers are No, No, and No

This depression (and we are in one, masked only by safety nets galore), is The Price We Pay For Budgetary Murder.

Unfortunately, the budgetary murder continues unabated, and that will prolong this depression.

No policy ever performs badly enough to cause its disciples to abandon it.

Of the two reports, Non-Manufacturing ISM is the more important. Here are a couple of key points from a Video Discussion by Bloomberg Economist Rich Yamarone about the Services ISM.

1. 55% of all consumption is services based
2. Private employment is well over 85% in services

This report was weakest where it matters most: employment, imports, and exports.