Are we “Trending Towards Deflation” or in It?

Are we "Trending Towards Deflation" or in It?

Paul Krugman is worried we are Trending Toward Deflation.

Inflation has been falling, but how close are we to deflation? I found myself wondering that after observing John Makin’s combusting coiffure, his prediction that we might see deflation this year.

Here’s the thing: the usual way inflation is measured is by looking at the change from a year earlier. But if inflation is trending lower, that’s a lagging indicator — if prices have been falling for the past few months, but were rising before that, inflation over the past year will still be positive. On the other hand, monthly data are noisy. So what to do?

Well, a crude approach would be simply to fit a trend line through those noisy monthly numbers. Here’s what happens when you do this for the Cleveland Fed’s median consumer price inflation number. On the vertical axis is the monthly inflation at an annual rate, on the horizontal axis months with Jan. 2008=0: 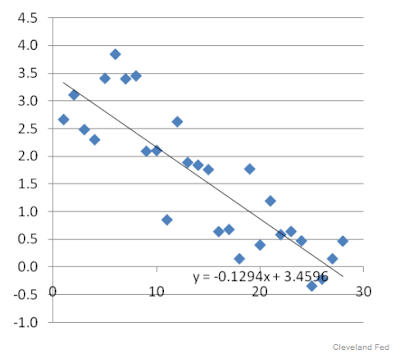 What I take from this is that deflation isn’t some distant possibility — it’s already here by some measures, not far off by others. And of course there isn’t some magic boundary effect when you cross zero; falling inflation is raising real interest rates and making debt problems worse as we speak.

There is a second chart and further discussion in Krugman’s article.

The Rising Threat of Deflation

The article Krugman referred to is The Rising Threat of Deflation. Here are a few snips highlighting Makin’s and Krugman’s concern over prices.

Meanwhile in Japan, while analysts were touting Japan’s first-quarter real growth rate of 5 percent, few bothered to notice that over the past year Japan’s gross domestic product (GDP) deflator had fallen 2.8 percent, reflecting an accelerating pace of deflation in a country where the price level has been falling every year since 2004. As of May, Japan’s year-over-year core deflation rate stood at 1.6 percent.

Note the concern over the CPI by Krugman and Makin. Is that what Bernake is most worried about?

Bernanke is far more likely to be worried about home prices and commercial real estate prices, neither of which are in the CPI. Next up, Bernanke is seriously concerned over falling bank credit and marked-to-market valuations of debt on the balance sheets of banks. Those are not in the CPI either.

I do not know how to rank those concerns other than to say everyone of them is far more important to the Fed than whether the CPI drops an essentially meaningless point from here.

Devil is in the Definition

Whether or not we are in deflation or trending towards it depends on how it is defined.

For example, monetary purists worried about money supply alone are under the preposterous notion that we are trending towards hyperinflation.

Given that we have a fiat-based credit system, it is equally silly to discuss inflation/deflation without paying attention to credit. After all, the Fed can print but it cannot force banks to lend or consumers to spend.

Credit expansion is the key to inflation in a fiat-credit system. Those focused on prices or money supply alone, and those worried that Fed printing and excess reserves will soon spark inflation have missed the boat.

Please see Fictional Reserve Lending And The Myth Of Excess Reserves and also Fiat World Mathematical Model for a rebuttal to the notion that monetary printing will soon have the inflation genie flying out of the bottle.

Practical Definition of Inflation and Deflation

My definition of inflation is much more practical given that it incorporates credit and marked-to-market concerns that affect banks’ willingness to extend credit.

Given that consumer credit is plunging at unprecedented rates, given that credit dwarfs money supply creation, and given that marked-to-market valuations of credit on the balance sheets of banks is again falling, I propose we are back again in deflation.

My model suggests part of 2007 and all of 2008 were deflationary years. Inflation returned in 2009, and the economy is back in deflation now.

Proof is in conditions one would expect to see in deflation.

In Humpty Dumpty on Inflation I proposed a series of conditions one might expect to see in deflation. Let’s take a look at the current state of those conditions.

Note that I expect gold should wise in deflation. I say that on the basis that Gold is Money and gold in the senior currency has historically increased in value in deflationary times. Other deflationists, some very notable ones, definitely got this wrong.

In case no one is keeping track, Bernanke has now fired every bullet from his 2002 “helicopter drop” speech Deflation: Making Sure "It" Doesn’t Happen Here.

Here is Bernanke’s roadmap, and a “point-by-point” list from that speech.

Bernanke has failed. "It" has happened.

I wrote about Bernanke’s Deflation Prevention Scorecard in April 2009.

Regarding points 8 and 9 above: the Fed did purchase treasuries and agencies, but admittedly without an explicit ceiling.

The Fed has stopped those purchases but is likely to start again.

Would Flattening the Curve Help?

Many propose that the Fed is likely to flatten the yield curve by setting explicit yield targets on the high end. Will that help? How?

I see no credible reason it would cause banks to go on a lending spree or consumers to go on a buying spree. Indeed, I do not see how forcing down the yield curve with massive treasury purchases will do much of anything but making a bigger exit problem for the Fed at some point down the road.

Moreover, it looks like the yield curve is falling nicely on its own accord!

The key problem for Bernanke is we have reached the Consumption Inflection Point – No One Wants Credit; Consumer Spending Plans Plunge

Keynesian stimulus measures have failed and will continue to fail. Please see Three Mish Segments on Tech Ticker, on Stimulus, Retail Sales, the Markets, Alternatives for details and an online interview.

We have wasted $2 trillion fighting deflation. It has not produced any jobs.

The correct way to spur growth is by fostering an economy that supports economic growth. For details, please see Bleak Outlook for Small Businesses and Job Creation; Where Obama Went Wrong, and What to do About It.

Keynesian Cures Worse than the Disease

Krugman has the wrong definition and the wrong worry. However, he is correct in his call for deflation. Unfortunately, this will lead to a bunch of "I told you so" kinds of posts from Krugman, in spite of the fact his cures are worse than the disease.

Indeed, Keynesian "cures" are one of the reasons this economy is in the mess it is in.

The final analysis shows that the real threat is not of deflation, but of absurd Keynesian and Monetarist attempts to prevent it. The Greenspan-Bernanke housing bubble (and subsequent crash), and decades of futility in Japan should be proof enough.