The Key to Understanding “Recession” and “Recovery”: The Wealth Pyramid 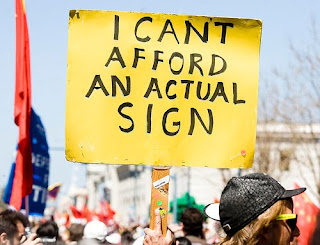 The top 20% are prospering and spending money; the bottom 80% are not, but thanks to vast wealth disparity, the top slice of households can keep consumer spending aloft. This provides an illusion of "recovery" that masks the insecurity and decline of the bottom 80%.

There is statistical and anecdotal evidence supporting both a "we never left recession" and "the economy is recovering" interpretation. The key to making sense of the conflicting data is to understand that there are Two Americas.

Roughly speaking, we can divide the U.S. economy into "Wall Street"–the financialized part of the economy which encompasses the FIRE (finance, insurance and real estate) economy and its bloated partner in predation, the Federal government–and "Main Street," the looted, overtaxed remainder of the "real economy" which isn’t a Federally supported corporate cartel (i.e. the military-industrial sector, the "healthcare"/sickcare sector, Big Agribusiness, etc.)

Needless to say, the Federal/financialized/corporate cartel tranch of the economy is doing very, very well, thank you. The number of Federal employees pulling down $150,000 annually is skyrocketing, hundreds of billions in revenues slosh into National Security and sickcare cartels, and Wall Street bonuses are in the tens of billions.

A thin, overhyped tranch of the tech economy is also doing well–Google employees just got a 10% raise, for example–but this overhyped tranch includes a razor-thin share of the 130 million person U.S. workforce. Google’s global workforce is about 23,000, Twitter has a staff of roughly 300 and Facebook employs about 1,500 people.

There are two Americas in terms of wealth and income: In terms of income, the top 10% earn about half the total income, and in wealth, the top 5% own roughly 70% of all financial wealth.

I have prepared a Wealth and Income Pyramid of the U.S. to illustrate this reality. Notice that the "middle class" is mostly a figment of nostalgia and/or political illusion. Only the top quintile (top 20%) are really doing well in terms of income, and only the top 5% are prospering in terms of assets and unearned income (non-wage income).

David Stockman, director of the Office of Management and Budget under President Reagan, recently noted in an editorial that the top 1% of Americans received two-thirds of the gain in national income from 2002 to 2006.

Over the past 25 years since 1985, the top 1 percent’s share of national income has doubled; in 2007, it netted 23 percent of the nation’s total income. The income of the wealthiest Americans–the top 0.1 percent—has tripled in that 25 year period. This wafer-thin slice of Americans now earn as much as the bottom 120 million people.

This explains how Nordstroms’ earnings can rise by a healthy 43% while Wal-Mart’s sales in the U.S. can decline. Frequent contributor Cheryl A. reported that on a trip to Wilmington, DE, the shopping mall was packed with shoppers and people dining out: "It’s like there never was a recession."

Meanwhile, I took an old friend who was visiting the San Francisco Bay Area to a restaurant in San Francisco that has never failed to be busy in the past 10 years, and the place had more empty tables than customers. The sidewalks were crowded with people, but how many were spending money?

I think the answer is obvious: the top 20% are spending money lavishly, as per their consumerist lifestyle, while the bottom 80% are taking the kids to Costco for entertainment.

The top 20% pay the vast majority of the taxes: According to the Congressional Budget Office (CBO), the top 20% paid 86.3% of all Federal income taxes, 43.6% of Social Security, 87.8% of corporate taxes and 34.1% of Federal excise taxes. After including earned-income tax credits, the bottom 60% of households paid less than 1% of all Federal income taxes, and the households between 60% and 80% paid 13%.

But the top quintile’s share of national income rose despite the tax burden. In other words, income disparity has widened even though the wealthy pay the bulk of Federal taxes.

The notion that American households are paying down debt is simply unsupported by the facts. According to the Fed Flow of Funds report, consumer credit (credit cards, auto loans, etc.) has declined a paltry 0.7% from $2.59 trillion in 2008 to $2.4 trillion–and most of that was not debt paid off but uncollectible debt written off by banks.

In other words, the households with substantial incomes may not be adding to their debt load but they certainly aren’t paying it down much either–they’re spending freely in the malls and in "fine dining restaurants" just like they did in 2007.

The top 20% of U.S. households are spending, so "recovery" is in the air. Those with household incomes of $100,000 or more are buying new vehicles (which explains why vehicle sales are rising) and spending freely, while the bottom 80% scrape by.

That’s how you get a statistical "recovery" that masks the recessionary misery of the bottom 80%–the "real economy" left to rot as the Federal government channels the national income into politically powerful corporate cartels, Federal fiefdoms and Financial Elites.

For more on the Two Americas, please read:

Income Disparity in the U.S.

Household income in the U.S.

Why We Keep Getting Poorer: High-Cost Housing (February 4, 2010)