Thursday Foolishness – More of the Same with One Trade

Our day is done, how’s yours?

That’s right, we already did our 3am trade where we caught the dead top of oil (and the dead bottom of the Dollar), where my 2:59 am comment to Members in Chat was:

Dollar at session low of 80.40 at 3am and oil back at yesterday’s high at $103.70 so oil (/CL) makes a nice short below $103.75 here but DANGEROUS pre-market trading as Iran could spout off at any moment and the trading is VERY THIN.

For the next hour, I did a blow by blow on the oil trade in Member Chat on the way down to $102.70 – a nice $1,000 per contract worm gotten by the early birds, where we took the money and ran ahead of likely morning manipulation back up to $103.50, where we can short it again on inventories (11am).  The Dow slipped to 12,300 and paid a solid $250 per contract as well, paying for over 100 Egg Mcmuffins this morning by itself.  If you want to see how we make decisions along the way down – it’s well worth going over this morning’s comments – there was also some good discussion of other topics this morning, including my pick for the best wide-screen TV.

We’re still just messing around with hit and run plays, waiting to see how the week pans out and next week we’ll be waiting to see how earnings pan out as well as what we expect will be a pretty major market pullback leading into the 10-year auctions next Wednesday at 1pm.  Clearly the Fed freaked out and jumped in yesterday when TLT hit $118 so we are fairly comfortable with our prediction of a slide into the 1pm 3-year note auction on Tuesday that culminates in panicking people into 10-year notes the next day.  AFTER that, we can start looking at earnings to drive the market. 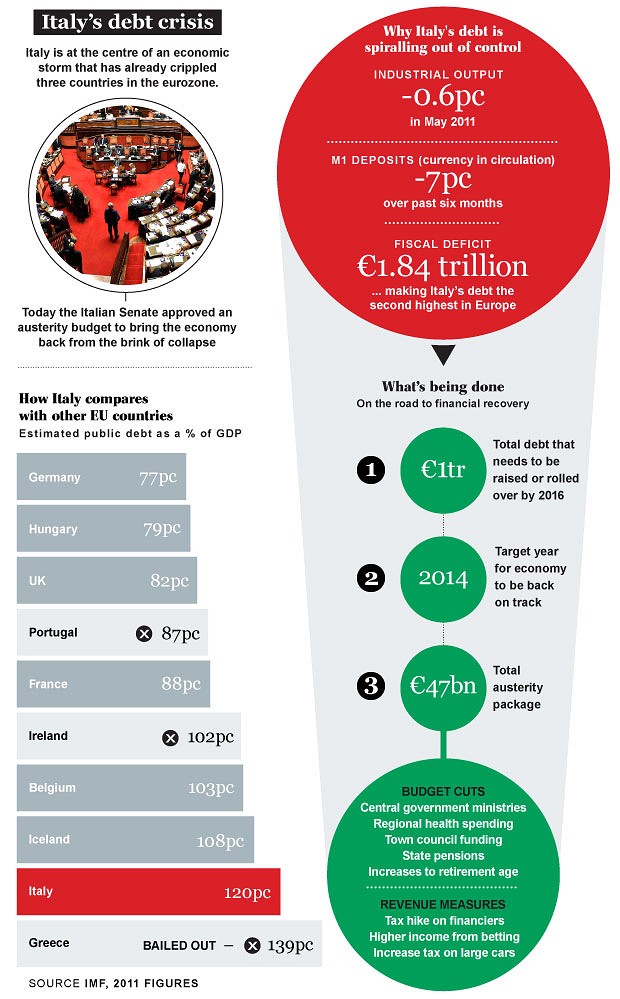 Driving the gloom this morning is a story we picked up yesterday but it seems to be surprising people today that Unicredit’s failure to raise capital yesterday is causing their stock to drop today.  Italy’s second largest bank is now trading well below it’s 2009 crisis lows and is back at levels not seen since the early 90s and the whole Italian market is down 3.3% this morning – led down by Financials.  Italian 2-year notes are already back up to 4.72% while Spain is creeping up to 3.63%.

So Europe is still a mess – not a surprise really.  We’re patiently waiting for next week’s earnings data so we can get a feel for what’s real in the market and what is not.   Some early reports are mixed with HELE, MON (got ’em) and MSM beating this morning but RPM, WOR and STZ missed and PLCE slashed guidance by 30% with "margins hit by discounts and record high apparel costs."

THAT doesn’t sound good, does it?  And STZ is a pretty diversified company with revenues down 27% year over year and they STILL missed those lousy expectations.  Even LLY cut guidance this morning as Zyprexa goes off-patent.  What is this World coming to if we can’t make insane profits on anti-psychotic drugs?

BKS is down about 30% pre-market after announcing plans to spin off its digital business – which is the only part people like!  Still, I don’t think investors understand what spin-off means so I’m going to be liking a play on them under $10 this morning, perhaps selling puts into the initial drop.

We "only" lost 372,000 jobs last week and the ADP report came in hugely strong at +325,000 vs expectations of 150,000.  This is the largest monthly increase for ADP since the same December report last year and the market rallied all the way up to 1,344 on the S&P by the end of the month before dropping back to 1,250 so anything less than a big pop off this news and we know there is other stuff that’s much worse than it was last year without even checking.

As you can see from David Fry’s XRT chart, we’re pretty high in the range on high expectations that are simply not likely to be met.  I was hoping for a test of $55 to go short again (we hit them last summer for a good ride down) but this morning’s data doesn’t make that likely and woe unto the markets if they can’t hold 50 through earnings.

Of course, what really matters is, as usual, the financials.  Dave has a nice chart from MS showing that the top 6 financials: BAC, GS, GE, WFC, ALL and JPM are EXPECTED to contribute 26.3% of the S&P 500’s TOTAL earnings growth for 2012 – that’s a heck of a lot of responsibility heaped on what have recently been very narrow shoulders.  We’re in BAC, JPM, GE and ALL and are generally bullish on the Financials but I’ll bet many people are going to be surprised that it’s BAC who are expected to lead the S&P’s earnings thrust in 2012 with a 12.25Bn turn around in profits.

That’s right, when you see all the clever analysts on TV telling you that they are targeting 1,350 on the S&P – keep in mind that, if you don’t believe in BAC – then that whole premise is right out the window.  So, I guess we should put BAC in our One Stock Portfolio – the portfolio for lazy people who can’t be bothered to play the market every day (or maybe just have a life) and just want to pick just one stock that they can put everything in on a make or break trade.

So that’s it then – have a lovely 2012 – I’ll check back with you next January and we’ll see how this goes.

By the way, nothing against Roro but that brings up one of my pet peeves with "job seekers."  What the hell is wrong with kids these days that they ask for jobs and they ask for money but they bring nothing to the table?  When I would apply for a job – I would learn about the company I’m applying for and I would take the opportunity, when meeting with someone, to make a pitch on why it would be profitable for them to hire me.  Maybe it’s my English/Jewish family background but I never even asked about the money – to me, that made it seem like I didn’t know what I was applying for and, of course, if it was an entry-level position – I had no intention of staying at that level for long anyway.

Maybe I’m out of touch as I haven’t applied for a job for over 2 decades but I used the same attitude when raising money from VCs and I was very good at that and I’ve hired hundreds of people myself (but not sat through most if the interviews) and I look for similar qualities in others and used to often find them (getting on 10 years ago now) but now, it’s just "I need a job so give it to me please."  So, to all you job seekers out there – try to keep in mind that the person ("job creator") you are asking for a job is an ENTREPRENEUR, who probably worked very, very hard to get where s/he is and they do not want to hire you to LOSE money – they want to hire you so you can make them more money.

Make your’self valuable and, to get a job more easily, you need to know what value-strengths you have and apply for jobs where those strengths can be PROFITABLY put to work for the company you want to work at.  Applying for random jobs just because they have a sign on the door or an add in the paper isn’t efficient.  Use the Web and apply where you add value in a place where you fit – if you BELIEVE you fit in somewhere, you’ll have a much easier time convincing a potential employer of the same.

Points well taken Phil………sorry, did NOT intend to offend and I agree with your take. As for me, my attempts at humor often fall short or end up being not all funny.

Looking at the daily chart for the Dow and price is pushing up against the edge of the top Bollinger band for the 4th day in a row.

they ask for money but they bring nothing to the table?
Now, I wonder just where and how they learned that?

they ask for money but they bring nothing to the table?
Sounds like the next generation of bankers to me!

I had a marketing Prof in Univ who constantly drillled us with the idea that when you get a job you had better think every day "what I am going to do today that will help my company make more money than I did yesterday" because if you are not thinking that, someone higher up the food chain will be.