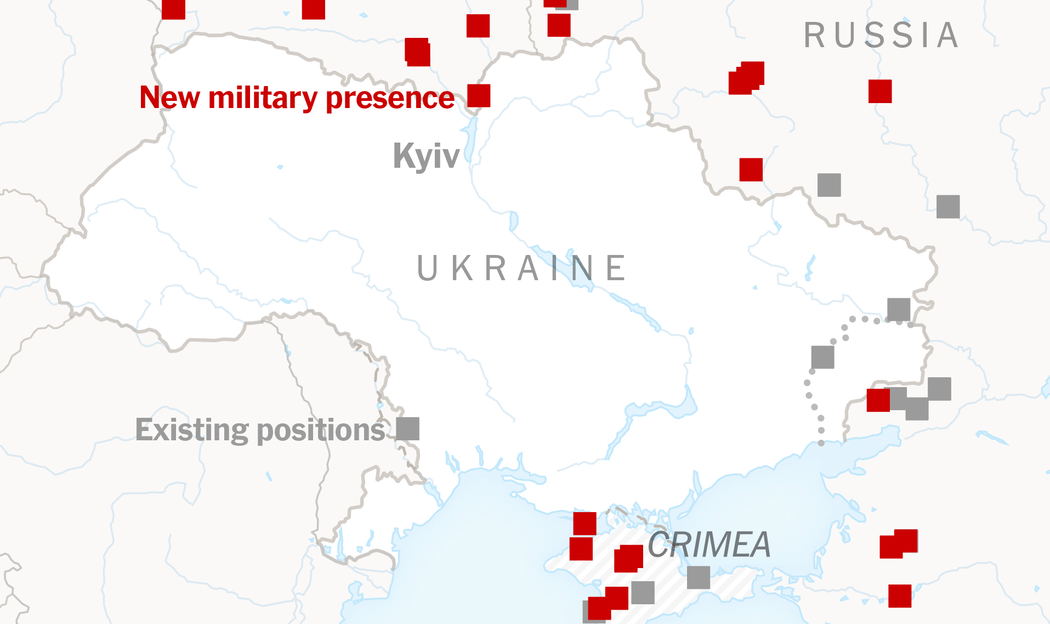 That's how the US and NATO are responding to Putin's entry into the Ukraine and note there is only one red box in the area we're paying attention to but many, many red boxes now surrounding the country.  We tried scantions in 2014, when Russia invaded Crimea and, guess what?  They are still there!

So, since sanctions had zero effect last time and this time Putin has had 8 years to prepare for more sanctions – it's kind of a useless, futile effort on the part of the Allied forces.  Literally the LEAST we could possibly do to pretend we are responding.  According to a White House Press Release:

"Treasury is targeting Russia’s ability to finance aggression against its neighbors by sanctioning the Corporation Bank for Development and Foreign Economic Affairs Vnesheconombank (VEB) and Promsvyazbank Public Joint Stock Company (PSB), along with 42 of their subsidiaries. VEB is crucial to Russia’s ability to raise funds, and PSB is critical to Russia's defense sector. These sanctions ensure VEB and PSB can no longer do business in the United States and are cut off from the U.S. financial system. All assets under U.S. jurisdiction will be immediately frozen and U.S. individuals and entities are prohibited from doing business with these institutions unless authorized by OFAC. This will immediately impair the ability of VEB and PSB to perform basic functions in the international financial system. Today’s action constrains Russia’s ability to finance defense-related contracts and raise new funds to finance its campaign against Ukraine. Treasury is also designating influential Russians and their family members in Putin’s inner circle believed to be participating in the Russian regime’s kleptocracy, including the Chairman and CEO of PSB." 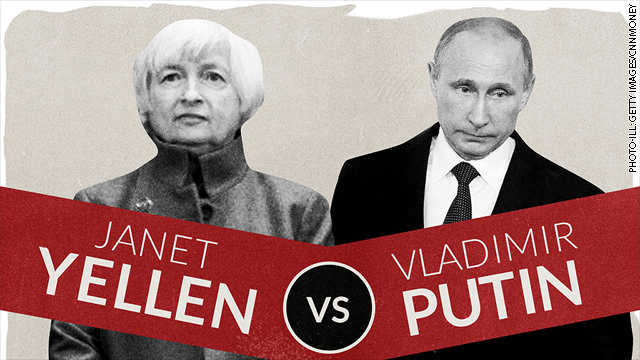 Yes, that's it.  That is how we are responding to Russia invading a neighboring country – we send Janet Yellen out to attack Putin.  Fortunately for Yellen, Putin is only 5 foot 7 but he's still got 4 inches on Yellen at 5 foot 3 and yes, US foreign policy is now so stupid that we may as well compare height and age (Putin is 6 years younger at 69) but, of course, Putin is a trained assassin while Janet Yellen is from pre-gentrified Brooklyn – so he doesn't stand a chance….

There's actually a lot of Russians in Brighton Beach, which is called Little Odessa, so Yellen is used to dealing with them – maybe she is Biden's best choice against the Russian Oilgarch?  Of course, the US has no desire to get into a war, proxy or otherwise with Russia but the lack of strong response here is only going to lead to China taking Taiwan down the road.  We should have learned from WWII that sanctions and strongly worded letters and appeasment is not the way to stop expansionist aggression – yet we go to that playbook every time.

As we were discussing on Bloomberg last week, the market doesn't care if Russia invades Ukraine, it only cares about what kind of disruption it causes and, with these half-assed sanctions, the answer is not much so we have a bit of a relief rally this morning and the Nasdaq is already back over 14,000 – after bottoming out at 13,700 yesterday.  Still it's a dire situation and, as long as the Russell is under 2,000 (it's right on the line), we can expect more market pain ahead as there are way worse things out there than Vladimir Putin.

So far, the Bounce Chart this morning is the same as it was yesterday morning:

I know you look at these charts and you WANT to believe we're making a bottom at 14,000 but 14,000 is SUPPOSED to be bouncy and 14,100 is the real number anyway so failing to get over that is BAD.  That's what the Bounce Charts do – they stop us from engaging in wishful thinking and stick to the facts.

At the moment, we are remaining cautious – especially until we see this chart back to green.