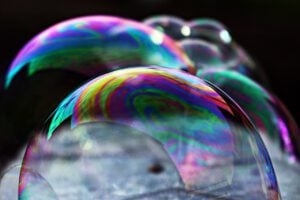 Bubble is a dirty word.

Most investors think bubbles should be avoided at all costs, but the truth is:

Buying stocks in the early stages of a bubble can be very profitable.

It went on to crash more than 90% in less than two years.

More recently, the same thing played out with “battery tech” techs. Quantumscape Corp (NYSE:QS) skyrocketed from $10 per share to over $130 between August 2020 and December of that year.

Of course, this bubble popped too. QS nosedived 90% a little over a year after topping out.

Buy Stocks Before They Enter A Bubble

Unfortunately, that’s not possible with most stocks today.

Most industries are coming off multi-year bull markets.

Some stocks have gone up in almost a straight line since the 2008‒2009 global financial crisis.

But there is one industry that has been overlooked…

It hasn’t “bubbled” yet. But I believe a bubble is starting to form.

I’m talking about uranium—and in a minute I’ll share a simple way to cash in on the coming uranium bubble.

First, let’s look at a common misconception about uranium…

Bring it up in conversation and many folks will get all worked up about the Chernobyl disaster or Fukushima. But disasters like those are extremely rare.

And they keep people from recognizing that uranium is one of the cleanest energy sources on the planet.

According to the International Panel on Climate Change, nuclear power produces less air pollution than solar, wind, or hydro.

This is why I called uranium my #1 way to profit off climate change in January.

In March, I doubled down on uranium… calling it my top play for today’s red-hot commodities market.

And I’ve only become more bullish on the industry.

Global X Uranium ETF (NYMARKET:URA), which invests in a basket of uranium stocks, has rallied 23% since the start of the year.

This massive rally comes after a nine-year bear market in uranium stocks.

More important, uranium stocks are beginning to separate themselves from the broad market.

The chart below compares the performance of the Global X Uranium ETF (URA) versus the SPDR S&P 500 ETF (NYMARKET:SPY), which tracks the S&P 500.

When this line is rising, uranium stocks are outperforming the broad market.

Below, we can see URA is emerging from a massive base against SPY.

That suggests uranium stocks will be outperformers for years to come.

Sprott is a global asset manager specializing in precious metals and other resource assets. Its Sprott Physical Uranium Trust is the world’s largest physical uranium fund.

Specifically, countries around the world are adding nuclear power to the clean energy mix because renewables like solar and wind have intermittency issues. In other words, the sun needs to shine and wind needs to blow for them to reliably generate power.

He also noted institutional investors have bought 50 million pounds of physical uranium over the past 12 months through its Uranium Trust. 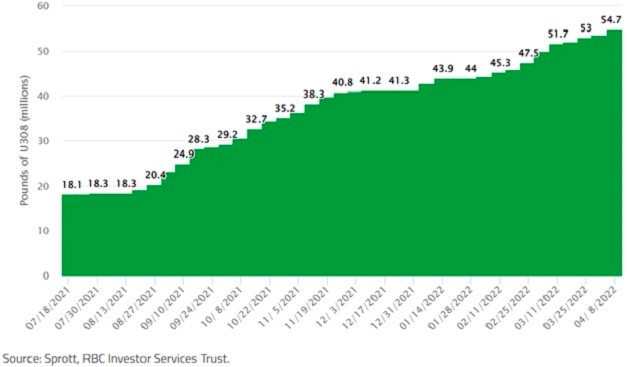 This is a huge deal. Utility companies, or the users of uranium, now must compete with investment institutions over the scarce supply of uranium.

And everyday investors are starting to take note.

We know this because trading volumes in uranium stocks are soaring. If this continues, uranium has the potential to become the next big bubble.

The chart below says it all. It compares the market values of US publicly traded uranium stocks with oil and gas stocks. You can see the uranium market is a tiny fraction of the oil market. 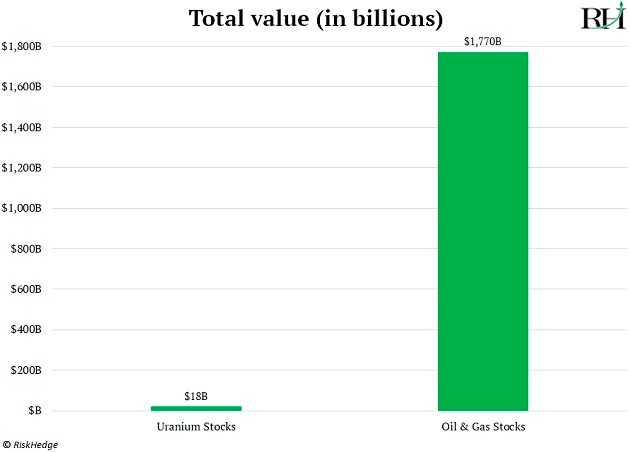 And it doesn’t look much different when you include non-US uranium stocks.

The current uranium market situation reminds me of something an old mentor of mine, legendary investor Doug Casey, used to say…

When the market wants to get into gold stocks it’s like trying to force the contents of Hoover Dam through a garden hose. In the case of uranium stocks, it’s more like a soda straw. It’s a very small market.

Uranium stocks have the potential to become one of the most profitable bubble trades to come along in years.

You can easily take advantage of this setup by investing in the Global X Uranium ETF (URA).