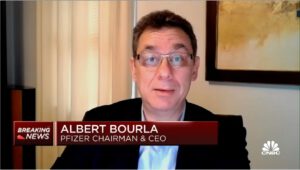 Following is the unofficial transcript of a CNBC interview with Pfizer Inc. (NYSE:PFE) Chairman and CEO Albert Bourla on CNBC’s “The Exchange” (M-F, 1PM-2PM ET) today, Tuesday, May 3rd. Following is a link to video on CNBC.com:

Pfizer Will Submit Data On Covid-19 Vaccine For Kids Under 5 In Next Few Weeks, Says CEO Bourla

MEG TIRRELL: Kelly, thanks so much and Albert, thanks for being with us. And let’s start right there on the guidance and the outlook for the rest of the year. You had some headwinds from foreign exchange that affected both the top and bottom line outlooks. You reiterated your revenue guidance for the year but it did affect earnings. How are you looking at kind of the contributions from both the underlying business and the Covid business for the rest of the year?

ALBERT BOURLA: Oh no, no. The exchange rates we covered both in revenues and the EPS. In fact we gave exactly the same revenues guidance and exactly the same EPS guidance. We just have an accounting treatment which is different. We have different ways of accounting given the request from the U.S. authorities how to account, adjusted towards non adjusted in process of R&D. So we have a separate line that has the process of R&D. That’s 11 cents. And as a result, we use 10 cents the guidance just to reflect only that. There is 10 cents of impact of exchange rate but we are absorbing it all.

TIRRELL: And just thinking about the underlying business and the Covid business, you know, I think analysts and investors are really trying to get a sense for how those are both performing. How are you looking at it for the rest of the year?

BOURLA: I think it performed according to our plans. In fact, in terms of budget, they were a little bit ahead in our own calculations, which gives us the comfort level to reiterate our guidance of 98, 200 which is 100 billion in the mean point of revenues, despite the fact that we had $2 billion of exchange rate. So in reality operationally, we increased our guidance by 2 billion. When it comes to Covid or with the vaccine or other treatment, most of the exchange rate actually affected this business as we had between the two of them $1.5 billion of negative exchange rate. Dollar is getting very strong, compared to euro, to Japanese currency, to everything. So as a result, we maintain the same guidance, but this means that our combined sales – have increased by 1.5 billion.

KELLY EVANS: Well, it’s a headwind that more and more people are going to be facing. I’m glad that you mentioned it and it explains why the shares are shaking it off. Let’s get back to Covid for just a moment. For kids, for instance, I have heavy, large children. You know, why not do the vaccines by weight instead of by age?

BOURLA: It is a standard practice that the regulators are asking in how to do that. It is not always the weight that counts. It is also how mature the immune system of the kids. And it has been found that it is better to lump it based on age rather than weight.

EVANS: Understood. What is the timing now for your vaccine, you think, to receive emergency use authorization from the FDA for children under the age of five?

BOURLA: I think we will submit pretty soon data on the third dose. Just to remind everyone that we submitted data on two doses back in February, months ago to the FDA. I think actually I came to your show and they discuss that a little bit. The data were pretty much in line with what Moderna, for example, has publicly stated. We just didn’t feel that the two doses is the absolute very – is the right one. These results I don’t think we found them adequate. So as a result, we felt that we should go to a third dose. And this is what we’re having right now. The third dose will be submitted in the next few weeks. We did the release data. What is the difference between two or three doses in an Omicron environment? In kids above five years old. And the difference was astonishing. It was 36 times higher – 36 times full immune responses higher in the third compared to the second dose. I don’t have any reasons to believe that will be any lesser in young kids – younger than five. Although we’ll have to see. So in just a few weeks I think we will have a very safe vaccine. Keep in mind that we are giving only three micrograms of this vaccine to younger kids. Three micrograms is 1/10 of the dose we are giving to the adults. And we hope to achieve very, very good efficacy with this very, very good, well tolerable dose.

BOURLA: Yes, this is what I expect. Of course, we’ll have to see the data but when we saw the difference between two doses and three for kids above five years, this is what I said that we had the example 36 times higher. So if this is replicate to even to a lesser degree than 36 times in younger kids, we’ll have a way better vaccine with three doses.

TIRRELL: Well, we all hope to see that. I want to ask you also about the fall. You know the FDA has set a tentative meeting to talk about strain selection for the fall at the end of June. What are you thinking in terms of what you’re seeing from Omicron, BA.2, BA.2.12.1, BA.4 and 5? And if they say that one of those would be best to put in the vaccine, is the end of June gonna give you enough time to update it by the fall?

BOURLA: Right now, we do have an Omicron vaccine seems that will work against all of them. But what as you said, FDA this time would like to give guidance after the VRBPAC meeting that they will have I think June 28th as to what we should include in this vaccine. We will be ready with both and we will be ready also to manufacture any of the options of that FDA will require.

TIRRELL: I want to ask you also about PAXLOVID, your COVID antiviral drug. You said today you have about 90% market share in terms of COVID antivirals and we know that the US government has placed orders for 20 million courses but they’re having some issues with funding. Would that affect the second 10 million courses they’ve ordered from Pfizer or are those secured already?

BOURLA: I don’t think that this funding, the funding in general is a problem because it affects everything, the vaccines and the effects of the treatments but so far we have a contract with the US government.

TIRRELL: I see and so that is not in jeopardy, whereas we know that the vaccines for the fall potentially are an issue if we don’t see more COVID funding. I want to ask you also about an issue that’s come up for PAXLOVID and it seems like rare cases, but we’re hearing about it more and more where people take PAXLOVID for the five days, they then test negative, few more days go by, their symptoms come back and they test positive again. This sort of viral rebound idea. Is Pfizer looking into this? Would a longer course of treatment be something potentially Pfizer’s looking into in that situation?

BOURLA: We looked at it in multiple different levels. First of all, we had the clinical trial as you know which is a well-controlled environment. Over there, we monitor to see for this phenomenon, and we were doing proactively a viral load test so you’re not expecting only to be self-reported based on the symptoms. But we were checking if there is viral load that goes down and then comes back. We found that it is a very small the percentage that this is happening. It happened actually in the clinical trial, the control in no less than 2% but it was the same between placebo and treatment. This means that likely is not something that is related with giving a treatment, it’s related with the virus but in some cases like bacteria as well, your body can clean it and then somehow comes back. When we looked also in databases with already real world data and we have some databases that have already 300,000 cases in their, in their database, we witness even lower number, not 2%, we witness one in 3,000 but we had a rebound. So we are still monitoring very well. But what I want to say is that look, PAXLOVID is doing what it’s supposed to do. It is reducing the viral load. This is why in all these anecdotal cases, the few that I’ve heard, indeed after taking PAXLOVID, they became negative so it disappeared. Then in some cases, the virus came back which because the PAXLOVID is reducing by 90% the viral load and then the last thing left is for the organization to do. You need to take care of the virus in some cases, their immune system of the organization is not enough and then you give a second treatment and in all these cases I’ve heard, the second treatment took care of it and they disappear. But imagine I can only imagine what these people if they wouldn’t take PAXLOVID if their system cannot clear the 10% that remains what will be the clinical symptoms.

EVANS: We have to leave it there Mr. Bourla. I greatly appreciate your time. The more questions we could ask maybe you can rejoin us again in a few days here. Meg, thanks for bringing that to us. Appreciate it.