Short-Covers Unwind One Of The Most-Crowded Trades

The recovery of Chinese assets has been fast and furious. It was mainly driven by short-covering, according to Morgan Stanley. Now that peak pessimism has been pared and positioning is less lopsided, the easy part of the rally may be behind us. Improving data and a successful retreat from Covid Zero are needed to keep the momentum going.

Bank of America’s latest fund-manager survey shows investors saw shorting Chinese equities as the second-most crowded trade after long-dollar positions. The survey was conducted between Nov. 4 and Nov. 10, sandwiched between the party congress that disappointed investors and the official confirmation of the fine-tuning of the Covid policy.

The crowded positioning suggests short-covering may be one of the drivers that pushed the MSCI China Index up 26% this month, after Beijing loosened Covid restrictions and stepped up the support for the housing market. Indeed, Morgan Stanley’s quant analysts found evidence supporting the theory. Strategists including Gilbert Wong wrote:

Regional hedge funds were covering short positions from the YTD high levels of short interest, while some hedge fund managers in China were building tactical long positions again to chase the rally.

They believe the rally would be prolonged into year-end amid rising expectation of various fundamental improvements – e.g., Covid-zero relaxation and a temporary easing of geopolitical tensions. Thus, the most shorted stocks were leading the covering flows, resulting in the rally of low-quality and unprofitable tech plays. 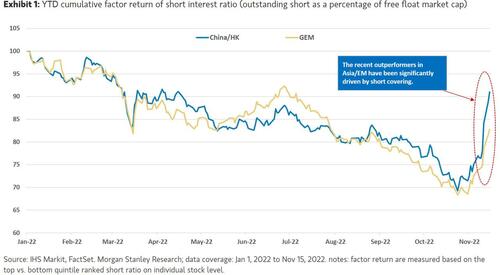 What’s more interesting is that the rally has been so quick that trading signals for trend-following strategies have flipped from short to long, according to the strategists. “Their algorithms have to trade on a reversal basis in the near term to minimize drawdown risk,” Wong wrote.

That shift in expectations is also captured by Bank of America’s survey of Asian investors. A net 26% of investors said they’d overweight China, up from 14% in the October survey. The overweight is more than any other places in the region. 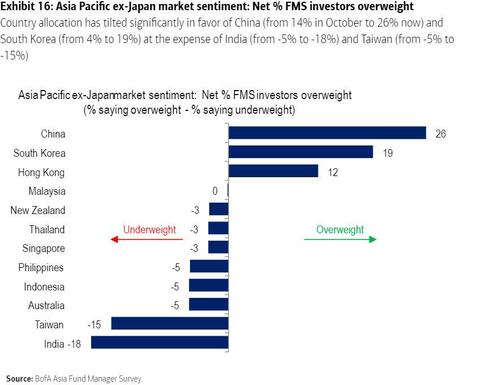 Make no mistake: The nascent optimism is more tactical than structural. A whopping 80% of the survey respondents said that the China equity market is in a “structural de-rating process.” 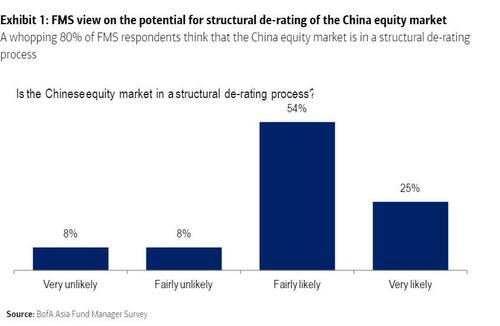 In other words, don’t overstay the party.