In its simplest incarnation, this is Trend Following: 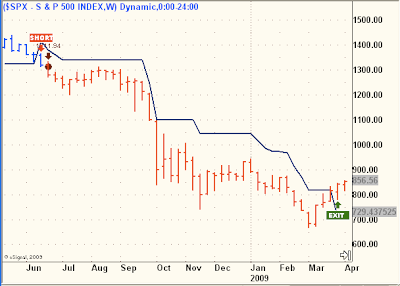 The SHORT on this SPX Weekly chart was generated at the end of the week of Jun 16, 2008 @ 1317.  It was in force until the end of March, 2009 @ 843.  That trade gained 474 SPX points, or about 36%.  It could have been implemented using an unleveraged index, SPY, for about a 36% gain.  It could also have been implemented using a leveraged ETF for approximately double, or triple that return.  The key focus for this tutorial is that the methodology was SHORT during a severe and prolonged market decline.

The next signal was a LONG signal, as shown on the chart below: 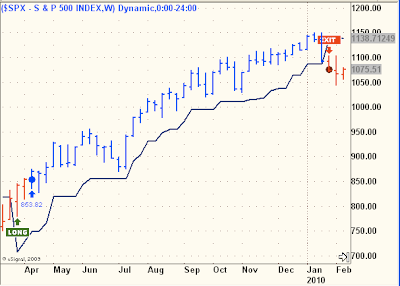 These two signal totaled over 700 SPX points over the course of about two years.  Such are the market times we are in and unless and until these volatile swings come to an end, this is a simple, mechanical, tradable way to participate successfully in these trends.

The trend line you see on the above charts is based on what is called an Average True Range algorithm.  It was written up in the June, 2009 issue of Technical Analysis of Stocks & Commodities.  The algorithm I use for these trends is slightly different then the algorithm written up in the article, not that mine is better, but I think it is more tradable.

The same algorithm works on Daily charts.  Below are some examples using the same trend model on the SPX Daily chart: 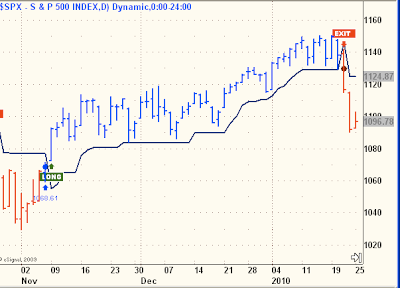 Notice how the Daily Trend Model works in the exact same way as the Weekly Trend Model.  In this case, a LONG signal in early November lasted through late January and gained about 30 SPX points.  Below, the ensuing SHORT signal in late January: 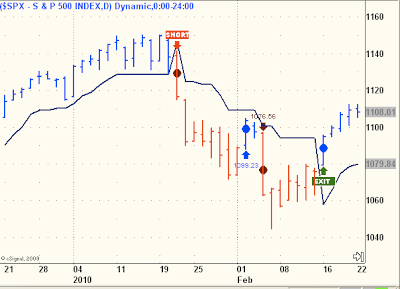 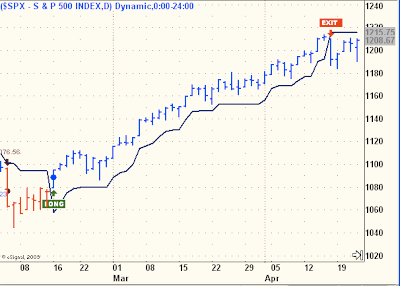 By now this looks the proverbial greatest thing since sliced bread.

Not so fast……looks what happens next: 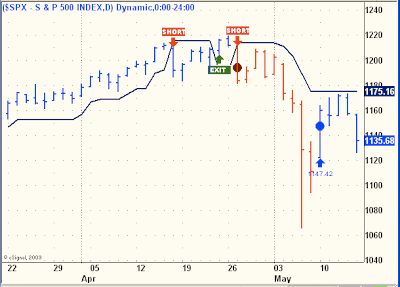 The SHORT_EXIT(LONG)_SHORT series of signals in late April is a whipsaw, or false alarm signals that quickly get reversed before generating a profit.  It happens. The key to being successful in trend following is to make more money in the trends then you lose in the whipsaws.  This particular trend following algorithm is the best I have seen at accomplishing this feat.  Maybe its the algorithm, maybe its the market, or maybe its the combination thereof, but its working in the NOW and finding something that works NOW is half, no, 3/4 of the battle.  The rest of it is up to the trader to implement the trend following signals.

That is where this service comes in.  The goal here is to identify the trends, monitor the trends and inspire my subscribers to implement strategies to exploit the trends.

FIND SOMETHING THAT WORKS.  THEN TRADE IT.

Assuming that we have found something that works, how do we trade it?  This service will keep abreast of the dominant trends in the market while all the time, suggesting various ways to trade those trends.  There is no one right way.  Much of this part is what is comfortable to the individual, based on time and commitment considerations.  That answer is different for everyone.  For some who have little time to monitor the market, using Weekly Trends makes the most sense.  For others who can look at the market every day, Daily Trends make sense.  Still others are full time traders for those, I include Hourly and 240 minute Trend Models. All of the models work the same, they all work off of the identical algorithm.  Most importantly, they all work.

In the above table I have identified four trend models each for the SPX and QQQQ.  The CURRENT SIGNAL is identified for each model, along with ENTRY PRICE  for the most recent signal, the CURRENT PRICE and perhas most important of all, the NEXT REVERSAL level.  It is that level where the trend line identified in all of the charts above comes into play in the current market.  If that level is exceeded at the end of the time period being examined, then the trend for that time frame REVERSES.

Included in the service are Trend Following Models for about 50 ETF’s and individual stocks.  I do that for ambitious and/or creative subscribers, but the truth is, it is only necessary to use one tradable, the SPX and one time frame,  Daily or Weekly, to reap the benefits of this trend following service.  If in addition to the SPX you have a favorite stock, i.e GOOG, AAPL, GS, or perhaps a favorite sector, i.e. GLD, SLV or UNG, they are all represented in the Daily and Weekly tables.  All of these trend models work the same, the same mechanical, objective, algorithm that identifies the dominant trend for that particular market.

There are also occasional stock picks or special situations that I bring to the attention of subscribers.  Consider such as "bonuses" to be exploited or ignored as per individual subscriber tastes and tolerance for risk.

That’s the service in a nutshell.  There is more to it, nuances and more complicated trading strategies, but for the most part, the above discussion covers all a subscriber needs to know to profit from the information being provided.

As Ken Kesey wrote in his opus to the 1960’s generation, you’re either "On the bus, or off the bus," or more appropriately for the 21st century markets, you’re either with the trend, or without it.