Let’s start with the Daily Trend Model, but it gets worse according to the article appearing after the chart. 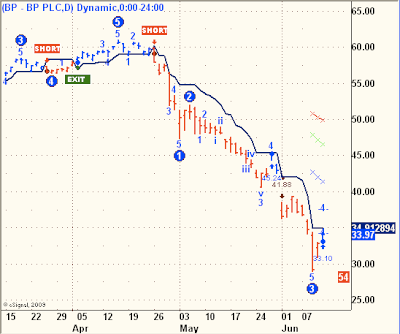 I lifted the following piece off of a trader’s forum this weekend and although I don’t know enough to comment on the veracity of the content, its scary enough to pass along, just in case it’s true.

Lindsey Williams is out with a new interview, over at Alex Jones. He’s claiming the following info about the BP Deepwater Horizon oil leak. He claims the information came from an oil industry executive whom he knew in Alaska when he lived with these people, and worked with them.

I don’t do a lot of Alex Jones. This information is unconfirmed, so we’ll have to see.

Here’s some of the information in summary form.

1) This is not a conspiracy, it’s an accident, and a disaster.

2) The oil is abiotic oil, from deep within the earth. It is not the fossilized remains of long dead life. This oil is produced within the earth, and the earth is full of it. The Russians discovered abiotic oil, and are now the number 1 exporters of oil in the world; but they had the good sense to drill for the stuff on land. Lindsey says the text books on how oil is formed will have to be rewritten. He stated there is no such thing as Peak Oil.

3) The oil is gushing from the well at pressures between 20,000 and 70,000 pounds per square inch. Lindsey indicates the wells in Prudhoe Bay, AK, came in at about 1,500 pounds of pressure. He says 50,000 pounds of pressure is beyond our technical ability to contain. I think this means that it would have blown the safety valve, even if it had not been defective. Lindsey indicated that the oil is gushing out at the rate of about 4 million gallons per day, but that the gent speaking knew he’d be quoted, and Lindsey suggested that you could put the actual figure much higher.

4) There is no hope of stopping the spill short of a nuclear weapon. It will take months to put this device (bomb) in place, as there will have to be an angle well drilled, and the bomb placed in it. I think this well then would have to be back-filled. In theory, the detonation would crush the existing well and well casing, and stop the flow of oil. Here’s the problem. Lindsey said he heard "fear" in the voice of the person furnishing the information, who then added that if this technique did not stop the flow of oil, it could actually fracture the rock strata and make it impossible to ever contain. A fractured rock strata would then produce other leak sources. (Note, there are already rumors of other leak sites apart from the Deepwater Horizon site, meaning a mad genie may have already been unleashed).

5) And the worst part (probably) is that there is more than just oil gushing from the seabed. It is accompanied by volatile hydrocarbons which are poisoning the area, and are bubbling to the surface where they can be blown ashore. He mentioned that one of these was benzene, a known carcinogen, and a potent one. Lindsey’s tone was that if this were just an oil spill it would be one thing, but these volatile hydrocarbons put the disaster in a whole new league.

Allan’s “Trend Following Trading Model” is based on his trend-following trading system for buying and selling stocks and ETFs. Most trades last for weeks to months. Allan’s offering PSW readers a special 25% discount. Click here.  For more details, read this introductory article.