Let’s start with a look at stock market valuations.

On a valuation basis, the S&P 500 remains about 40% above historical norms on the basis of normalized earnings. The disparity between our valuation assessment and the putative undervaluation being touted by Wall Street analysts is so great that a few remarks are in order. First, virtually every assessment that "stocks are cheap" here is based on the ratio of the S&P 500 to year-ahead operating earnings estimates, and often comes with a comparison of the resulting "earnings yield" with the depressed 10-year Treasury yield. What’s fascinating about this is that this is the same basis on which analysts deemed stocks to be about 40% undervalued just prior to the 2007 top, following which the market plunged by more than half. There’s a great deal of analysis regarding forward operating earnings that I published in 2007, but probably the most comprehensive piece was Long Term Evidence on the Fed Model and Forward Operating P/E Ratios from August 20, 2007.

I happened to mention similar thoughts last week in a Tech Ticker with Joe Weisenthal: Mish: Say No to Stocks, Because Optimism Is "Insane"

The optimism I mentioned was in relation to earnings estimates, not trader sentiment measures such as bull vs. bear measures.

When you hear analysts say that the historical average P/E ratio is about 15, you have to recognize that this is the normal P/E based on trailing 12-month earnings after subtracting all writeoffs and other charges. Forward operating earnings are invariably much higher, and it turns out that the comparable historical norm, as I discuss in that 2007 piece, is only about 12. If you exclude the late 1990’s bubble valuations, you get a historical norm closer to 11.5. The 1982 and 1974 market lows occurred at about 6 times estimated forward operating earnings.

A final observation is crucial. Current forward operating earnings estimates assume profit margins for the S&P 500 companies that are nearly 50% above their long-term historical norms. While we did observe such profit margins for a brief shining moment in 2007, profit margins are extraordinarily cyclical. Investors will walk themselves over a cliff if they price stocks as if profit margins, going forward, will be dramatically and sustainably higher than U.S. companies achieved in all of market history.

From the link immediately above

This week brings the official start to second-quarter earnings announcements. As the mechanism for data delivery gets switched from the faucet to the fire hose, investors may want to keep a few things in mind as the reporting season progresses. Lofty earnings expectations result in poor stock market performance, on average.

The chart below gives one perspective into how bullish stock analysts currently are. The data is compiled by Ned Davis and it shows the median estimated one-year earnings growth rate for the companies in the S&P 500. Analysts are now forecasting more than 21 percent earnings growth for the median stock over the next year, a record level in the 30 years of data. 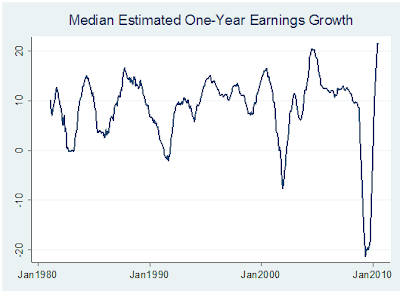 As John Hussman noted in Recession Warning, three of the four metrics that provided a warning of an approaching recession in 2007 are in place.

A drop in the PMI index to 54 or below is the remaining indicator in that original set of metrics that hasn’t signaled.

The chart shows the growing divergence between expectations for earnings and the global PMI indexes. 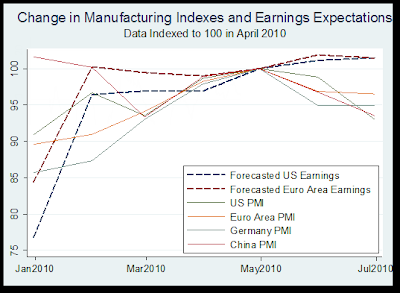 The spread between the changes in global PMI Indexes and global earnings expectations is an increasing concern, especially considering the evidence that increases the probability of renewed economic weakness. Earnings growth forecasts have never been higher measured by the median expectation. This alone, typically leads to poor stock performance. The growing gap between PMI Indexes and earnings expectations increases these potential risks.

Hester has 5 charts in total so please give the article a closer look.

I like to comment on public policy although some wish me to stick with the economy. The problem is, someone has to stand up to Krugman, Geithner, Summers, Bernanke, and others who want to do nothing more than throw money at every problem.

Hussman seems to feel the same way. From the first link …

There is little question that we have, for more than a decade, squandered our productive resources in the pursuit of bubbles. Almost unbelievably, real private gross domestic investment is lower today than it was 12 years ago, and much of the gross domestic investment that we have made in the interim has been destroyed in mispriced speculative activity such as residential construction and commercial real estate development.

If our only response to excess consumption is to pull out all the stops trying to "stimulate" consumption every time it falters; if our only response to reckless lending is to defend the bondholders every time their poor allocation of capital threatens to produce a loss for them, then quite simply, we will destroy our economy, our future, and our standard of living. The last thing I want to be is a cheerleader for the bears here. But quite honestly, it’s difficult to envision a return to long-term saving, productive investment, and thoughtful allocation of capital until – as happens every two or three decades – the speculative elements of Wall Street are crushed to powder.

With regard to education, my impression is that the educational sector in the U.S. is about as inflexible the European labor market – the entire structure is hugely inefficient because it is detached from measures of quality and student time-on-task, undercompensating many excellent teachers and at the same time institutionalizing the employment of poor ones. Meanwhile, the failure of parents to maintain a heavy involvement in their kids’ education, in the belief that the responsibility for education, personal responsibility and moral development can simply be thrust onto teachers, is a problem that money alone can’t address.

If we as a nation fail to allow market discipline, to create incentives for research and development, to discourage speculative bubbles, to accumulate productive capital, and to maintain adequate educational achievement and human capital, the real wages of U.S. workers will slide toward those of developing economies. The real income of a nation is identical its real output – one cannot grow independent of the other.

Those who understand economics and have a strong opinion on public policy need to state it. I appreciate the fact that Hussman is willing to do so.

I just touched on those points above, inquiring minds will want to give Hussman’s and Hester’s articles a closer look.