I wish we weren't but the odds favor the bears as we flatline after a 5% run for the month of July.  The 5% Rule isn't complicated – we expect a 20% pullback of the run (1%) and we kind of have it on the RUT and the NYSE but, so far, the other indexes are in denial.

That's why, on Friday, I reiterated our 500% bullish hedges for our Members in Chat – we MIGHT be wrong to be bearish because the Fed MIGHT, the GDP MIGHT be better than we thought and Draghi MIGHT actually do something, rather than just jibber jabber for the 4th consecutive ECB meeting.  It COULD happen…

Just in case it doesn't though, we're leaning a bit bearish but, over 1,700 – call us bulls!  As you can see from Doug Short's SPY chart, the volume sure doesn't look like what you expect if we're going to break higher and it's downright scary to be bullish when your 200 dma is 10% below your index.  Now, a sudden pop over 1,700 isn't going to raise the  200 dma, is it?  So, how much higher than the 200 dma do you think the index is likely to go without a pullback? Can this time be different?  Not really.  Even though the Fed may ride to the rescue – how do you think we got those out-sized pops in the first place?  QE2 was announced in Q4 2010 and that sugar rush got us to 1,344 but then nothing until we corrected.  Operation Twist came in Q4 or 2011, saving us from a collapse at the time and ultimately driving us to 1,422 and QE3 hit in November of last year and here we are at 1,700. 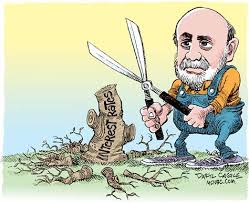 The difference is, each time the Fed has stepped in and upped the ante – the market was crashing and they felt it was necessary to get the markets back on track.  Why on Earth would they fire off what could be their last barrel when the market is already at record highs?

There is one possible reason:  The Fed may feel that we need one more big push to really get things popping and they are willing to gamble that one last ditch, all-out effort to boost the economy to a self-sustaining level will finally work.  It's crazy, but it's possible.  As Marc Faber says about Central Banker actions: "Insane people don't realize they're insane."

And that is, essentially, the only thing we can be bullish about – that bad news is good news because, despite $105 oil and $4 gas and rising food prices and rising home prices and record market highs – we STILL need more stimulus to go higher NOW!!!  Of course it sound crazy when you write it down – that's why they prefer to say it on TV….

8:30 update:  GDP is up a whopping 1.7% but they've completely changed the way they calculate it so who the Hell knows what's real.  Is this good news that's bad news?  Finer minds than mine will have to calculate the "normalized" GDP without the very drastic changes the Government made on this report, which count the development of intellectual propery (books, movies, TV shows, this article) as R&D investment rather than expenses.  A change this drastic is adding an estimated $400Bn (2.5%) to our GDP.

I think this good news is bad news because the Fed has to pretend the jacked-up GDP number is real and, based on their completely irrational logic – this news is good so they can't add more stimulus.  Also, ADP came in at +200,000 vs +180,000 expected, also good news that can't be ignored by the policy makers.

Well, I'm not seeing any finer minds so far analyzing the GDP, so forgive me for taking a crack at it.  Last year's GDP has been revised up from 2.2% to 2.8% using the new R&D calculations. That's a nice 27% upward revision to GDP and that means that we should take 18% off the 1.7% to get to a more realistic 1.24% and that's still pretty good.  Another huge benefit of recalculting our GDP to be 27% higher is we lower our debt to GDP ratio by 18% – isn't that BRILLIANT!

Who said our Government can't lower our debt ratio?  Between changing the way we calculate GDP and dropping the value of the Dollar 20% – we've made tremendous progress!  In reality (I know, ugh) consumer spending, which accounts for more than two-thirds of U.S. economic activity, slowed to a 1.8 percent growth pace after rising at a 2.3 percent rate in the first quarter.

Pre-revision, the GDP was $15.984Tn, post revision we're at $16.535Tn so a nice $550Bn boost, primarily from the Entertainment industry (I read somewhere that Sienfeld alone added $70Bn to the GDP over the years under the new calculations!).  Overheard just now at Chinese Finance Ministry: "You can't trust those American GDP numbers. They cook the books!"

Just ahead of the open, the markets are flat but TLT is way down to 106 as sentiment has shifted away from more easing on this "great" GDP report.  The Dollar popped back over 82 and I'll be very surprised if we don't get a sell off and a sell-off today can turn those chart ugly very quickly.

So please – be careful out there!

There has to be more to it than QE so I'd be very careful with the Futures but too tempting not to take a poke at shorting that $107 line on /CL.

Welcome back Arivera.  Cash is indeed an excellent choice.

Cash/ZZ – Well, there's a lot of it about, I suppose.  Also, the banks aren't lending because they think rates are climbing so they'd rather wait and get a better spread.  Nothing makes them happier than a 0.25% Fed while they write 5% loans with 10x leverage on their capital.

DBA/Stock – You have to be careful about the food mix of the place you are looking at.  Texas Roadhouse uses a lot of meat and that's expensive at the moment.  CMG, on the other hand, uses little meat and lots of avocados (got cheap) and rice (glut) and corn (cheap), etc.  MCD got so whacked by chicken prices they discontinued tenders (which were breast meat).  So be careful extrapolating from any single restaurant chain.  Still, food inflation overall is much worse than stated – the main culprit is packaging as the CPI makes no distinction if last year you got a 20-ounce Vitamin Water for $1.99 and this year it's 16.9 ounces.

I'm way out of touch because I don't usually buy the beer at the store but I picked some up last weekend and was like: "When did this happen?!?"  A lot of the 6-packs (micros) are now $10.

Warp speed/StJ – I am very in favor of giving money to smart people and letting them think of stuff.  It only takes one winner to make Billions of Dollars "thrown away" all worthwhile.  $50K buys 20,000 guys like that for $1Bn – unless you are a REALLY bad picker, you have a pretty good chance of getting a winner eventually.  Plus, you learn a lot from the losers as well (Edison's theory).

Big Chart – Well, based on my above short calls on the Futures, you know how I feel about this.  It is still possible that we're consolidating for a breakout but that's where the Fundamentals kick in and I just don't see enough fuel to break orbit here.  It would be so nice to get back to RUT 1,000 and consolidate on that 50 dma and then take another run at it into October earnings.  Then I'd be a 1,750 believer for sure!

All negative, Scott – well in a market with volume 40% below average, the bots have nothing better to do than target your trades.  Short-term trading is simply too dangerous in this market.

Oil/Jrom – Same as above to Scott, you can't short-term trade it, especially in this part of the cycle.  That's why we took the USO October $35.50 puts (and only 10) in the STP this time.  We WANT to roll up and DD and this (silly spike up) is pretty much par for the course at this point in the monthly cycle.

Oil/Bert – More so than don't trade oil in July (in 2011 it dropped from $100.62 to $75.71 from mid July to early Aug) the CONSTANT lesson of oil is don't over-commit early in the cycle.  Generally, expirations on the NYMEX are around the 20th, so there's no real pressure on them to do anything until the last 10 days (10th) before the rollover date.

Our general assumption for oil is they can dump 30,000 contracts per day so, when we get to 10 or less business days and they still have 300,000 contracts, we assume they will have a spot of trouble unloading them all.  That's when we get excited about shorting – I think the problem a lot of people have is they don't re-set their expectations after the 20th, when you really have to wait the next 2 weeks to see what's going to happen.

Big gain for futures as global markets rally
No policy change from Bank of England  The Bank of England maintains its benchmark lending rate at 0.5% and the QE program remains dormant at £375B in purchases.
The pound (FXB, GBB) shoots higher by about 65 pips after the Bank of Englandleaves policy unchanged.  Some had expected the bank – with Governor Mark Carney now settled into the top job – would boost stimulus in some fashion, perhaps adding to the QE program.  British stocks give up their gains, the FTSE 100 (EWU) back to flat on the session.

J.C. Penney says all is well (turns out all those "news" reports yesterday were false!)