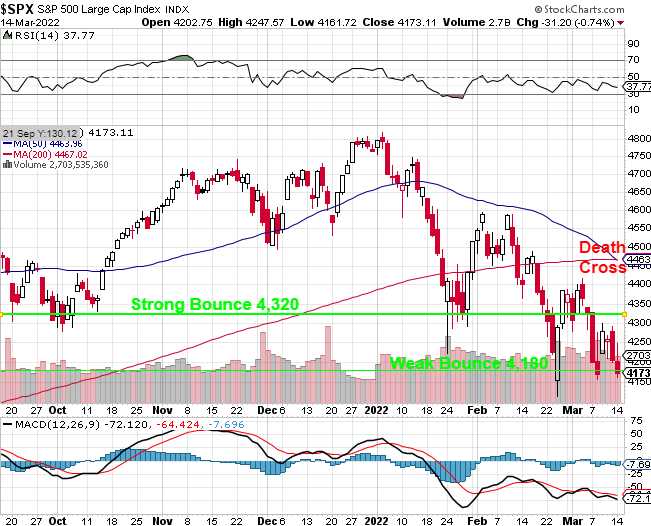 There's no excuse for forgetting to bring a present – I told you this was going to happen last Thursday, when I said:

As we predicted in our Live Trading Webinar last month, we're about to hit that "Death Cross" on the S&P 500 and that is BAD.  Even though we could see it from literally a mile (and a month) away, it will still come as a surprise to traders and analysts, who use TA completely wrong on a mass scale.  As I said at the time, if you understand HOW a chart is made, then you can predict what it will look like in the future.  If you are GUESSING where the market will go based on the chart you see – you're doing it wrong.

What does the Future hold?  Well we have the Fed Meeting next week and inflation is out of control so it's not at all likely they don't hike at all and the market expects 0.25% and 0.5% would be a big negative – so there's no likely positive there.  We also have PPI, Retail Sales, Housing Starts, Industrial Production and the NY and Philly Fed – hard to see any of those things popping us over the 200 dma so, if we assume we have another 7 trading days below the 200 dma – that is likely to pull the 50 dma below 4,450 – where we'll get our cross into Q1 Earnings – which are not going to be very positive either.

Meanwhile, we watch and wait for the market to resolve itself but that looming Death Cross means it's not likely we'll be jumping off the sidelines in the next two weeks.  We went over our hedges yesterday and they seem adequate but I do keep thinking I'd rather be in CASH!!!

And thank goodness we didn't as all these head fakes were just that and, this morning, China is melting down (also as we predicted) with the indexes over there down more than 5% this morning and now more than 10% below their pandemic lows.  The main catalysts for China are the ongoing builder crisis, the sudden persecution of tech giants and now Covid is spreading though the Middle Kingdom, shutting things down again.

CASH!!! was a good call and still is as – looking at China's market melt-down – there is NOWHERE to hide once investors start selling so I'm still strongly considering pulling the plug on our portfolios, rather than trying to ride out this storm.  That brings us to our Short-Term Portfolio Review (STP), which is where we hedge our long portfolios.  Let's see if we feel like we have enough insurance after last week's adjustments in our Live Member Chat Room (CVX yesterday dropped too fast so it was a voided play): 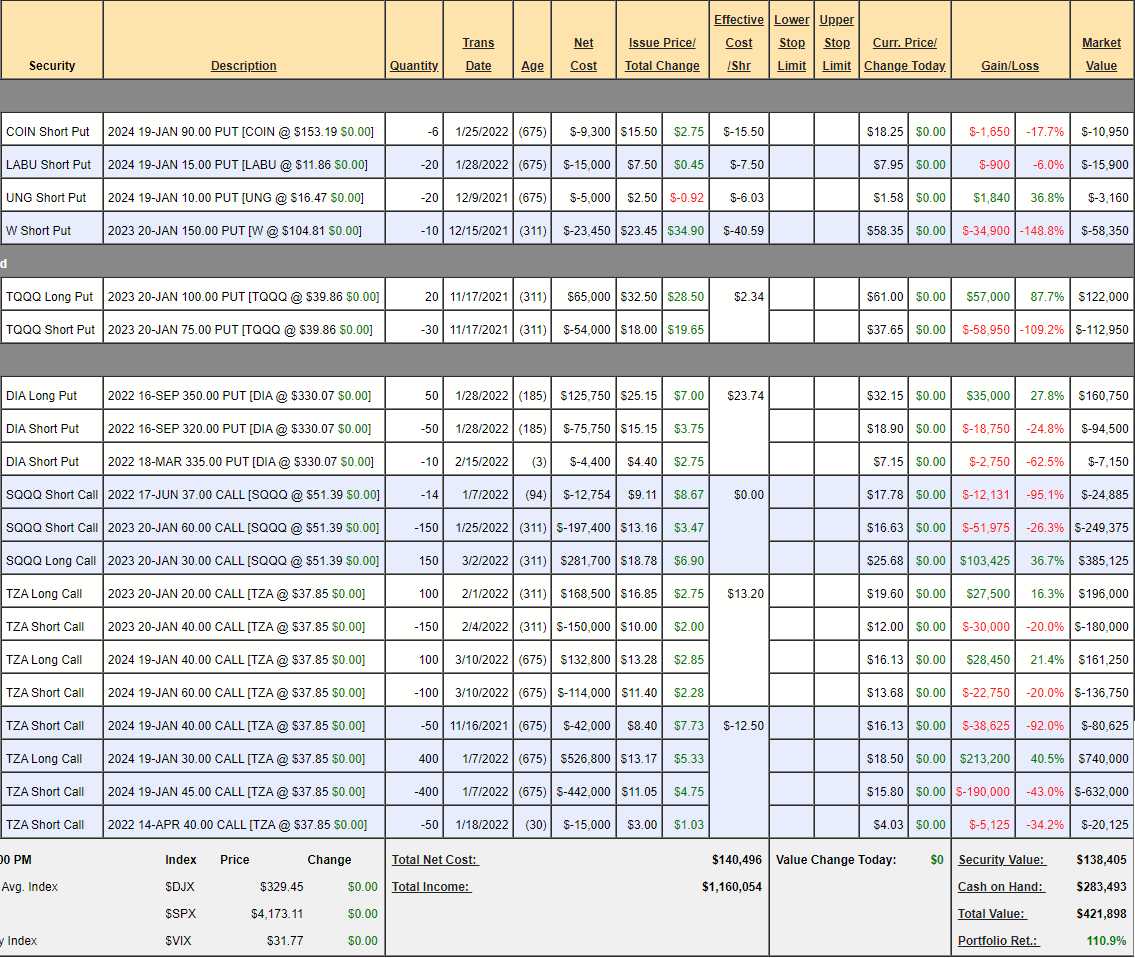 A few things to make note of:  These hedges don't pay out unless the indexes go down AND STAY DOWN into the expriation date.  They are hedges, not BETS – which means their main purpose is to let us keep our longs so, if the market bounces back – we lose on the hedges and win on the longs.  If we start cashing out longs – these become bets and our strategy will need to shift.

As it stands, we have $1,066,160 worth of downside protection, most of which kicks in after just a 7% drop from here.  It's a lot of protection and, so far, our long portfolios are holding up well so I'm not inclined to add more at the moment.  Unlike our other portfolios, we adjust the STP whenever we need to (as opposed to monthly around expirations), so I don't see any reason to change.  If anything, we'd like a bounce to get us out of trouble on some of these short-term covers we sold that are in the money.

We have a Fed day tomorrow and we'll be in our Live Trading Webinar so, if things go crazy – make sure you're watching us live as we may need to adjust things then.

I am super-proud that we took a big chance and got more bullish on SPWR as it was right before they finally popped – now we have to hope they can hold it as we're stuck bullish until probably May.  Still, it's a very strong collection of stocks in generally well-hedged positions yet we're still up 140.9% in just over 2 years – nothing wrong with that: 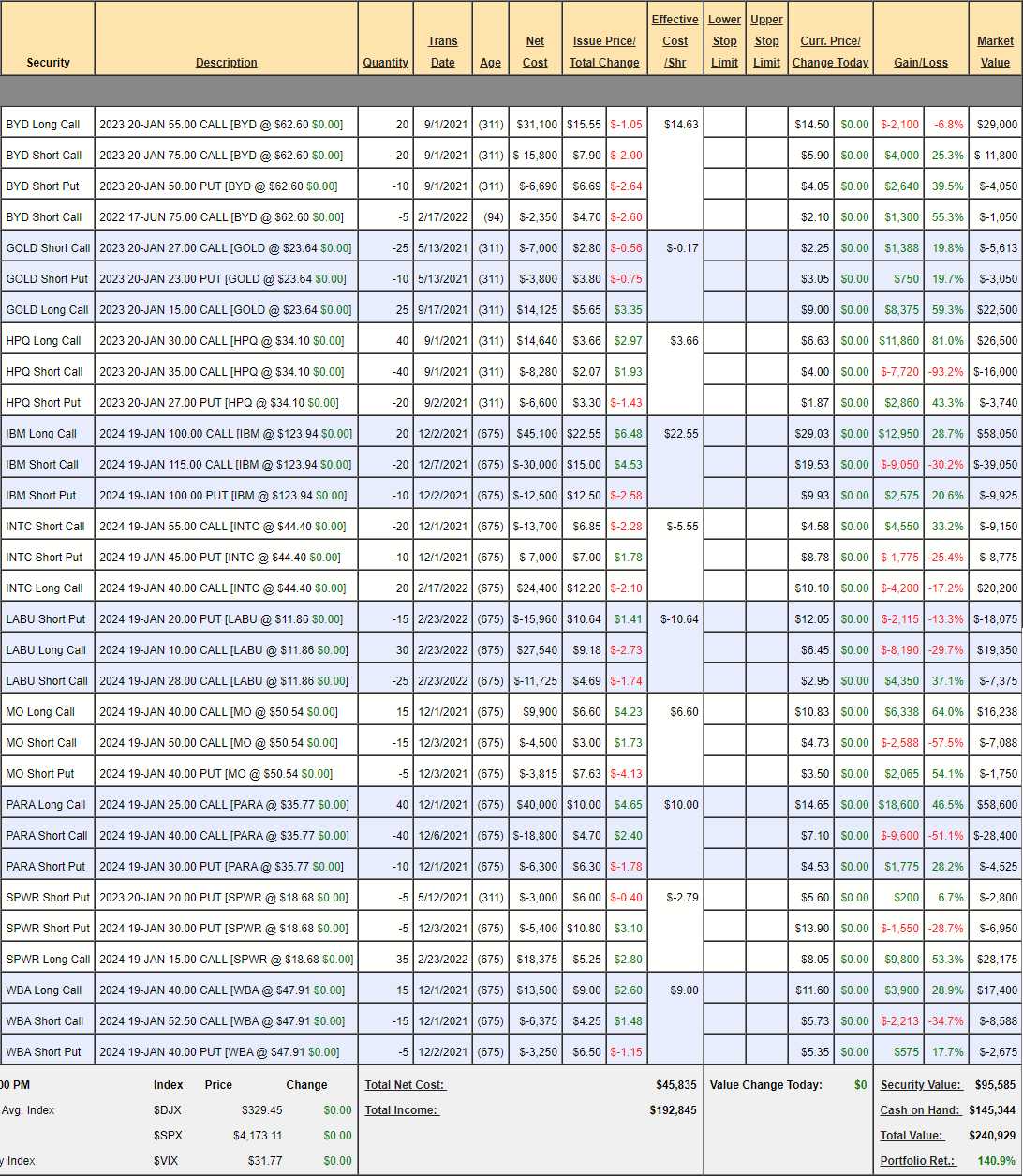 What do you attribute the commodity pull back to phil?

Sorry, was reading a lot of stuff.

Commodities/Tommy – The general consensus is that Putin won't have the stomach to go past a month and this is week 3 so they believe he'll look for a way to exit gracefully.  That won't work if Ukraine starts taunting him – which I've seen happening.  We knew it was all a huge over-reaction – oil simply can't cause gasoline to be over $5/gallon as that's over $8/gallon in Europe – it's enough to cause a recession within a quarter so it's kind of a self-correcting mechanism and there's similar blowback on other commodities.  Like with lumber last year from March until June it was up to 300% higher than the year before but, by 45 days, people just stopped buying it.  We're having a more sustained run now at 200% over normal ($400) but that's about to collapse as well as we're already seeing home-building start to dry up – despite high demand for housing. I think Putin way underestimated Biden's willingness to inflict sanctions as they do harm us as well and he gets blamed for it and it hurts him and the party but Democrats aren't like Republicans and they don't sell their souls for votes as easily or as quickly as GOP Congresspeople do.  4 year of dealing with Trump and "Moscow Mitch" may have led Putin to miscalculate how the Dems would respond to his aggression.

Robert Mueller had testified that Russia was meddling in the 2020 U.S. elections. McConnell, the Senate majority leader, responded by shooting down Democrats’ efforts to bring two election-security bills to a vote — bills that McConnell, in his familiar fashion, had previously sentenced to quiet deaths after they passed the House. In the hailstorm of opprobrium that followed, McConnell had been tagged by “Morning Joe” Scarborough with the indelible nickname “Moscow Mitch.” The Washington Post’s Dana Milbank called him a “Russian asset.” Twitter couldn’t decide whether he was #putinsbitch or #trumpsbitch.

In January, he had raised red flags among Republicans and -Democrats alike when he took a key role in lifting sanctions on Russian oligarch Oleg Deripaska, a Putin ally under FBI investigation for his involvement in 2016 election-meddling; three months later, Deripaska’s aluminum company, Rusal, announced a $200 million investment in Kentucky. A billboard funded by a -liberal group was subsequently erected on a busy stretch of I-75: “Russian mob money . . . really, Mitch?”