Ukrainian refugees might not return home, even long after the war eventually ends

Ukrainian refugees might not return home, even long after the war eventually ends 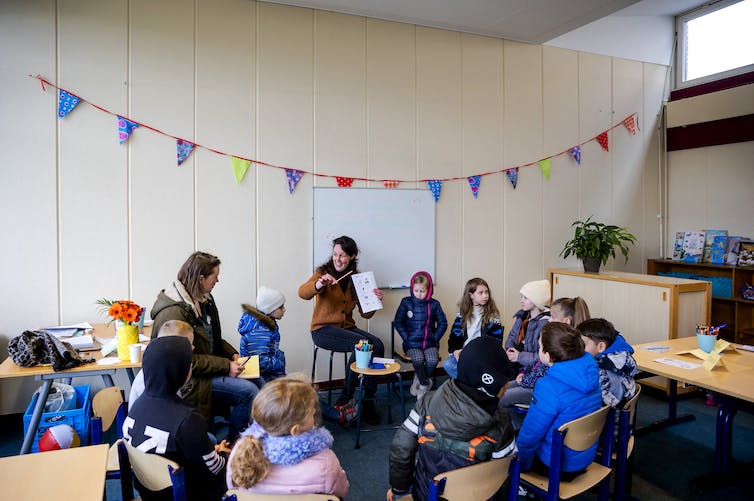 Ukrainian children are seen during their first day at school in Ederveen, Netherlands, on April 4, 2022. Robin Van Lonkhuijsen/ANP/AFP via Getty Images

Russia’s invasion of Ukraine has caused more than 4.2 million people to flee to the neighboring countries of Poland, Romania, Moldova and elsewhere.

Russia’s violence against civilians and attacks on cities caused an additional 6.5 million or more people to become internally displaced. They left their homes but moved within Ukraine to other areas where they hope to be safer.

But there is no guarantee that the millions of displaced Ukrainians will want to go back to their homes even once the war eventually ends.

Lessons learned from the experiences of people displaced in other conflicts, like Bosnia and Afghanistan, provide insight into what might happen with Ukrainians at the end of the fighting. A wave of new social science research, including my own as a political scientist studying post-conflict settings, shows that once violence ends, people do not always choose to return home.

Several factors affect people’s choice to return to the place they fled, or to resettle elsewhere. Time is perhaps the most important.

Research shows that generations raised in places of refuge may no longer want to return to the place that was once home.

The faster the Ukrainian conflict is resolved, the more likely it will be that refugees will repatriate or return home.

Over time, displaced people adapt to their changed circumstances. In the best case, they form new social networks and get work opportunities in their places of refuge.

But if governments legally stop refugees from seeking formal employment, their prospects for financial self-sufficiency are grim.

This is the situation in some countries with large refugee populations such as Bangladesh, where Rohingya refugees from Myanmar are forced to live in camps and are prohibited from working.

This would not be the reality for most Ukrainian refugees, however. Most of them are resettling in the European Union, where they can get a special temporary protected status that enables them to work, attend school and receive medical care for at least one and up to three years.

Ukrainians add to the growing numbers of people who are forcibly displaced worldwide as a result of conflict or climate disasters.

In 2020, the last year with reported global statistics, there were 82.4 million forcibly displaced people worldwide, the highest figure in the past 20 years. Refugees, people who cross an international border seeking safety, make up 32% of that number. Internally displaced people are 58% of this total figure. The remainder are asylum seekers and Venezuelans displaced without legal recognition abroad.

There are three reasons for the increase in forcibly displaced people.

First, there are unresolved, persistent conflicts in both Afghanistan and Somalia that continue to force people to move.

The withdrawal of U.S. forces from Afghanistan in 2021 caused the latest mass movement of refugees.

A second cause of rising displacement is the recent start of conflicts in Ethiopia, Myanmar, South Sudan and elsewhere.

Third, fewer people caught up in war are returning home once the violence ends. The average length of time refugees stay away from their homes is five years, but averages can be misleading.

For those 5 million to 7 million people in situations of protracted displacement – more than five years – the average duration of exile is 21.2 years.

Deciding to go home – or not

A recent study of Sri Lankan refugee children raised in India because of the Sri Lankan Civil War from 1983 to 2009 found that some prefer staying in India, even though they are not citizens. These youths feel they could better integrate in India if they were not labeled as refugees.

Some studies have shown that experiences of violence in people’s home countries diminishes their desire to return home. Other recent surveys of Syrian refugees in Lebanon show the opposite. These studies found that those who were exposed to violence in Syria – and had a sense of attachment to home – were more likely to want to return.

Age and the attachment to home that often comes with it also influence people’s desire to return to their home country, making it more likely that older people will return.

Interestingly, this is also the case in some natural disasters. After Hurricane Katrina forced people to leave New Orleans in 2005, only half of adult residents under 40 later returned to the city. That’s compared with two-thirds of those over 40 who chose to go home.

Rebuilding houses, returning property that has been occupied by others and providing compensation for property losses during war are vital to encouraging people to return home after displacement.

This work is typically funded by the post-conflict government or international organizations like the World Bank and United Nations. People need places to live and are more likely to remain in places of refuge if they have no home to which they can return.

There are exceptions to this rule. Following ethnic conflicts, refugees and internally displaced people were unwilling to return to homes in ethnically mixed neighborhoods when peace returned in both Bosnia and Lebanon. They preferred to live in new communities, where they could be surrounded by people of their own ethnicity.

Not just about peace

Finally, it is not just peace, but political control that matters to people considering a return.

Nearly 5.7 million Syrian refugees remain in Lebanon, Jordan, Turkey and other countries after more than 11 years of war in their country. Syrian President Bashar al-Assad has retained political power, and some parts of Syria have not seen active conflict since 2018. But it is still not safe for these refugees to return to live in Syria.

The economic situation in the country is dire. Assad’s government and related militias still conduct kidnappings, torture and extrajudicial killings.

Even if Russia retreats and pulls its forces entirely out of Ukraine, some ethnic Russians who were living in Ukraine before the conflict are less likely to return there. Returns are most likely when the government and returnees are happy with the outcome and people are going back to their own country.

Russian violence in Ukraine has changed the fuzzy division between ethnic Russians and ethnic Ukrainians into a bright line. The comfortable coexistence of the two groups within Ukraine is unlikely to resume.