Ever wonder if there’s a biological basis to the occasional problem some of us have in holding a stock too long?  For me, this could be called the dsco, pronounced "disco," effect, though there were others.   Research into the brain reveals that there is an evolutionary and biological basis to our valuing something we own over something we don’t – independent of actual value or emotional attachment.  – Ilene

It’s mine, I tell you

From The Economist print edition

Mankind’s inner chimpanzee refuses to let go. This matters to everything from economics to law 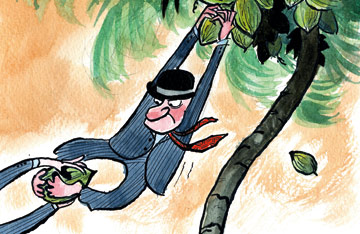 "’I AM the most offensively possessive man on earth. I do something to things. Let me pick up an ashtray from a dime-store counter, pay for it and put it in my pocket—and it becomes a special kind of ashtray, unlike any on earth, because it’s mine.” What was true of Wynand, one of the main characters in Ayn Rand’s novel “The Fountainhead”, may be true of everyone. From basketball tickets to waterfowl-hunting rights to classic albums, once someone owns something, he places a higher value on it than he did when he acquired it—an observation first called “the endowment effect” about 28 years ago by Richard Thaler, who these days works at the University of Chicago.

The endowment effect was controversial for years. The idea that a squishy, irrational bit of human behaviour could affect the cold, clean and rational world of markets was a challenge to neoclassical economists. Their assumption had always been that individuals act to maximise their welfare (the defining characteristic of economic man, or Homo economicus). The value someone puts on something should not, therefore, depend on whether he actually owns it. But the endowment effect has been seen in hundreds of experiments,…

The endowment effect has nothing to do with wealth (it is not as if chocolate bars and coffee mugs matter) or transaction costs (in most experiments these are zero). Not even emotional attachment, whatever that means, can really be called in as an explanation, since the effect is both instantaneous and sometimes felt even by those who buy and sell for a living. According to Pete Lunn, an economist at the Economic and Social Research Institute in Dublin, professional market traders are often reluctant to sell investments they already hold, even though they could trade them for assets they would prefer to invest in if starting from scratch.

Observing the endowment effect in three primate species suggests it does, indeed, have deep evolutionary roots. Better still, before they started work Dr Jones and Dr Brosnan predicted that the strength of the effect would vary with the evolutionary salience of the item in question. Lo and behold, when they tried the same experiments using bone and rope toys, no endowment effect was seen. Food is vital. Toys are not.

Steffen Huck, an economist at University College, London, has an alternative hypothesis that is directly to do with trade. In societies with markets, customers can go elsewhere. But in a small, tribal society there may be no alternative seller. In that case, those who were reluctant to trade might get better prices. It may thus make sense for an owner to be psychologically predisposed to hold out for a high price as soon as someone else expresses interest in one of his possessions—something Dr Huck’s models predict would, indeed, be evolutionarily beneficial.

Nor is the endowment effect alone in suggesting that Homo economicus is a rarer species than neoclassical taxonomists would like to believe. Other “irrational” phenomena include confirmation bias (searching for or interpreting information in a way that confirms one’s preconceptions), the bandwagon effect (doing things because others do them) and framing problems (when the conclusion reached depends on the way the data are presented). All in all, the rational conclusion is that humans are irrational animals."