Courtesy of Tim Iacono at The Mess That Greenspan Made

It’s been a while since a Jim Rogers quote graced the pages of this blog – it seems it was well worth the wait after looking at the gems offered up in this interview with CNBC today.

Gov’t Spending Is Like Tiger’s Dating: Jim Rogers
The U.S. government’s plan to increase spending as a way to kick-start the economy will leave the country with no way to help its way out of the next crisis, Jim Rogers, chairman of Jim Rogers Holdings, told CNBC Thursday. 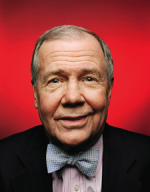 The Treasury Department "has been putting out all of this stimulus and now they’re talking about extending the (Troubled Asset Relief Program)," Rogers said.
…
Geithner "is a very smart person," but "he’s been wrong about everything for the last 15 years," Rogers said.

"Why are we listening to any of those guys down there? They’re making our situation worse," he said. "They said in writing yesterday the solution to our problem is to spend more money … that’s what got us into this problem: too much debt."

Rogers sees a currency crisis of some sort occurring somewhere around the world sometime in the not-too-distant future and asks how the U.S. government intends to solve future financial and economic crises if they borrow and print so much money to solve the current one, "What are they going to do, quadruple the debt again? Print more money?"