US Ranks Fourth In Global Competitiveness

I think the biggest surprise for US readers might be how high the US ranks in global competitiveness, and the countries that rank the highest. And of course there is the absence of China in the top ten. Shocking when viewed through the lens of an artificially managed-to-the-dollar currency pair.

Obviously having low paid and poorly treated workers is not the primary qualification for global competitiveness, at least in this national scaling. But it does seem to be a preoccupation of a significant portion of the Anglo-american crony capitalist elements which have never quite reconciled themselves to the laws against indentured servitude. 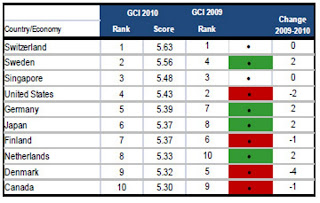 Geneva, Switzerland – Switzerland leads the pack, with Sweden and Singapore in second and third places respectively, and the United States in fourth in the latest edition of the World Economic Forum (WEF) Competitiveness Report, published Thursday 9 September. The US has slipped two places, after being overtaken in 2009 by Switzerland. The WEF attributes the lower ranking to “In addition to the macroeconomic imbalances that have been building up over time, there has been a weakening of the United States’ public and private institutions, as well as lingering concerns about the state of its financial markets.”

The report uses two sources: publicly available data and a survey of business leaders, with 13,500 business people in 139 “economies” queried for this year’s report. It contains more than 100 indicators for each country, part of the detailed country reports. “The survey is designed to capture a broad range of factors affecting an economy’s business climate. The report also includes comprehensive listings of the main strengths and weaknesses of countries, making it possible to identify key priorities for policy reform,” notes the WEF press release on the new report.

Nordic countries remain strong, says the WEF, with four of them in the top 15: Sweden (2), Finland (7), Denmark (9) and norway (14). China “continues to lead the way among the top developing countries” according to the report: it improved two places and is now ranked 27.

North African countries are competing more strongly, with several of them in the top 50.

Switzerland ranked number one in several areas in the report:

institutions, infrastructure, health and primary education, and financial market development. It was in the top five for labour market efficiency, technological readiness and innovation, giving it one of the top five slots in seven of the 12 indicators.