Thanks for the Gas Money, Mr. President! What the HELL has happened to this country?

Did we seriously just spend $830Bn to give tax cuts to the rich when we’re already $15Tn in debt?  When 20M Americans are officially out of work and another 30M have jobs where they can’t make ends meet?  Did Obama and the Democratic "leadership" just fold like an empty suit and sell what’s left of their supporters down the river and in exchange for what?  For the extension of jobless benefits for 2M people while another 450,000 people a week are laid off?

How does it help people who have no jobs to have an extended tax cut?  If Obama suddenly found $830Bn to spend, how about spending it to employ 16.6 MILLION people with $50,000 jobs?  THAT’S HOW MUCH $830Bn is!  Would 16.6M people getting jobs boost the economy?  It would do a lot more for the economy than giving it to a few Billionaires so they can buy more BMWs which they can drive to the next foreclosure sale so they can take away the homes of the people they are supposed to be "trickling on."

Aside from the obvious fact that the Bush Tax Cuts certainly didn’t leave us with a strong economy in their first 10 years and we all know that Albert Einstein’s definition of insanity is doing the same thing over and over again and expecting different results so we have to ask ourselves:  Has Barack Obama gone insane?  Have the Democrats lost their minds or only their souls (and their spines)?

As you can see from the chart on the left, our "leaders" have now endorsed a tax plan that gives families earning less than $75,000 an average tax break of $900.  That’s $17 a week!  I’m sorry, I titled this article "Thanks for the Gas Money, Mr. President" but good luck filling your tank for $17 a week.  In fact, before the Bush Tax Cuts, a gallon of gas was $1.50 but the $3.7Tn of debt we took on from the first 10 years of Bush Tax Cuts led to a rapid decline in the value of the dollar, which cased to price of commodities to fly up as the relative purchasing power of those dollars declined, pushing the price of gas up to a peak of $5 and what is once again $3 and climbing under Obama’s weak leadership.

The average driver goes 15,000 miles a year and the average family has 2 cars so let’s call it 30,000 miles and let’s pretend we have cars that get 30 miles a gallon so that’s 1,000 gallons of gas per year so just a $1 increase in the price of gas wipes out the whole of this tax cut.  Of course, it’s much worse than that because the average family is hit for another $1,000 in household energy cost and then there’s food inflation (the cost of food is up 30% since Mr. Bush took office) which accounts for 15% of the average families total spending so another $1,000 down the tubes there.

So Obama’s Tax Cut (now he owns it!) is costing the average American family $3,000 a year in food and energy costs alone while paying them $17 a week – what a complete and utter sell-out!  This is a very simple example of how The Bernank’s inflationary money-printing scheme is destroying the middle class.  As you can see from the chart, the Millionaire (or Multi-Millionaire), who EARNS $1M a year, which is over 40 times the average family income in America, may pay the same $3,000 in inflated food and fuel prices as you and I – but that’s out of their $103,835 PER MILLION of their annual tax savings (more than twice the average family’s TOTLA income). And that is NOTHING compared to how much of this nation’s wealth is being handed over to Big Corporations.  Even the Capitalist tools at Forbes realize that the corporate tax system is a joke.  The $17 a week discount that Obama and Company are paying off the voters with gives the same proportional benefits to corporations, who already pay an effective tax rate of less than 12%.  Forbes pointed out in April that GE, for example, earned $10.3Bn in pre-tax income and didn’t just pay ZERO taxes, but they claimed a $1.1Bn BENEFIT against future income!  Read the article for details of the shell game that goes on at GE and 25% of other US corporations that paid no taxes at all last year.  I often talk about the top 1% and, when I do, I am including our Corporate Citizens as well as Donald Trump and Warren Buffett, who has clearly stated he doesn’t pay enough taxes, with an effective rate of 17% of his income being taxed while his secretary pays 35%.

Even if you are one of the special few in the top 5% of this nation, getting a $7,152 tax break on incomes between $200,000 and $500,000 in annual income – does that really compensate you for the declining value of your home?  Does it make up for the rising cost of food and energy that you pay for every day?  Even more important, is it worth putting your family another $7,545 in debt for?  That’s right, you are borrowing that $830Bn and that debt is distributed on a per household basis while the money is distributed to whoever already has the most of it and EVEN if you earn $500,000 a year – it ain’t you babe!

Looking at the debt clock, you may notice that individual income tax is $892Bn and payroll taxes (which we discussed the unfairness of yesterday) are $863Bn while Corporations, who make far, far more money than individuals, pay just $184Bn and, as the Republicans love to point out – 90% of all "corportations" are actually mom and pop businesses who between $200,000 and 500,000 and they are the ones paying 35% – like Warren Buffett’s secretary.   Remove them from the equation and US corporation with over $100M in income pay an average of less than 10% in income tax! 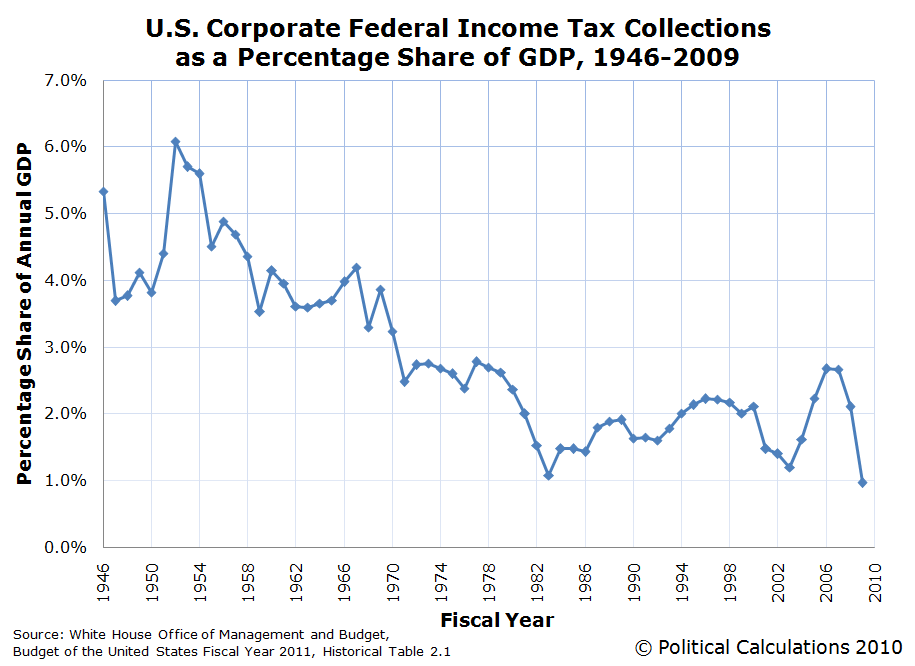 The next study from the GAO will be for 2010 but in 2005, the Government Accountability Office found that "About two-thirds of corporations operating in the United States did not pay taxes annually from 1998 to 2005.  In 2005, after collectively making $2.5 trillion in sales, corporations gave a variety of reasons on their tax returns to account for the absence of taxable revenue. The most frequently listed included the cost of producing their goods, salary expenses and interest payments on their debt," the report said.  Sen. Byron L. Dorgan (D-N.D.) called the findings "a shocking indictment of the current tax system."

It’s shameful that so many corporations make big profits and pay nothing to support our country.  The tax system that allows this wholesale tax avoidance is an embarrassment and unfair to hardworking Americans who pay their fair share of taxes. We need to plug these tax loopholes and put these corporations back on the tax rolls.

Senator Dorgan, of course, stands no chance of being re-elected now.

Ireland is a great example of what happens to countries that give free rides to wealthy Corporations and push the tax burden down to their people.  Unemployment in Ireland is approaching 20% and the people now have to bail out the same businesses they bent over backwards to attract with their low tax rates.  The United States has plunged $8Tn in debt since enacting the Bush Tax Cuts and half of that money is directly attributable to that policy while another $2Tn is good old-fashioned tax avoidance by Corporations who feel that even those rates are too much to pay.

That leaves you, the passive American Citizen, to clean up the mess and pick up the check.

I don’t expect you to contact your Congresspeople and I don’t expect you to send this to your friends.  Frankly, I expect you to perhaps have a tiny moment of outrage that will then pass and that will be the end of it while the Government plunges your family another $20,000 into debt this year.  Let’s face it, you are not important and you cannot do anything about this.  Your government will continue to take bribes from Corporate America and they will continue to extract the wealth of this once-great nation and drive the average Americans into a worthless life of wage slavery – probably until the pyramids are dust.  They can do this to us because we are a passive, lazy, uneducated society that gets all their "news" in sound-byte form and, in true Darwinian fashion, we will eventually become extinct while the Corporations, like locust, will simply move on to the next fertile field.  This is a warning to them – our economic successors.

Be warned, it can happen to you as well!

Knocking down $ and futures go green

Great article. I want to send it to my people but is this correct:  " Remove them from the equation and US corporation with over $100M in income pay an average of less than 10% in income tax!"    Is it supposed to be 100B?

Phil,
I wrote to my congrassman about recent oil price hike and the reply is typical political BS as you know. Oh well…. (I can sent you or post the reply if you want to)

It was for companies that earn over $100M, could have been more clear I guess.

Thanks, I figured it out. That’s why I didn’t post on the other page. I just misinterpreted at first. Mea culpa