The Reversal In Lordstown Motors Skids To A Halt 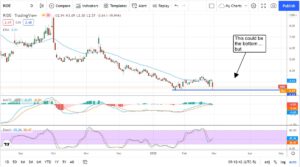 Shares of Lordstown Motors (NASDAQ:RIDE) popped in the wake of the earnings release but the gains were soon given up. The company reiterated its guidance amid some other good news and put the market for the stock into a reversal. The news was negated, however, later in the day during the conference call when the company CEO revealed some unsettling details to investors. While the deal with Foxconn is progressing there is still no definitive agreement for funding and what the collaboration will actually mean. This news makes the transfer of assets to Foxconn (part of the company’s transitional efforts) seem a little premature and it definitely puts the future of the business in jeopardy.

“While our discussions with Foxconn have been constructive and are ongoing, at this stage no definitive product development agreement and funding arrangement has been reached. We and I believe Foxconn understand that reaching a conclusion as soon as possible on this element of the transaction is important for the overall success of our partnership. I also believe that a joint product development agreement with an appropriate funding structure would greatly enhance our ability to raise the additional capital necessary to not only fund new vehicles, but to bring the Endurance into production in Q3. Clearly, we and Foxconn have more work to do.”

Lordstown Motors Is On Track For Q3 Production

Among the takeaways in the Q4 report are the company’s GAAP earnings (loss), the cash position, and the outlook for production. The company reported a loss of only $0.42 compared to the Marketbeat.com consensus of $0.70 due to a variety of factors. The company lists disciplined spending first but inventory, equity sales, and deferred spending all played a role as well. More importantly, the company lists $244 million of capital on the balance sheet which is $79 million more than expected but this is just about the end of the good news. The end of the good news is that the company says it is on track to begin commercial production in Q3 and reiterated its target production levels for this year and next.

The bad news begins with the mention of possibly needing additional capital, both in the earnings report and the conference call. That, and the possibility the Foxconn deal won’t pan out quite the way Lordstown Motors or the market is expecting, puts the company’s ability to raise that capital in jeopardy which in turns clouds the outlook for production. The bottom line, Lordstown Motors is at a critical juncture in its evolution and it looks like Foxconn is the gatekeeper to success. The number the company put out is $250 million or about 40% of the market cap with shares trading near $2.50.

The Analysts are not happy with the Lordstown Motors outlook and are now lowering their price targets on the stock. There have been 3 analysts’ notes out since the report was released, all lowering their price target, to a consensus of $2.50 compared to the broader Marketbeat.com consensus of $4.36. The consensus rating is Sell, however, with a rapidly decreasing consensus target so we don’t see this stock reversing soon. At best, shares of RIDE will trend sideways for the foreseeable future.

The Technical Outlook: This Might Be The Bottom For Lordstown Motors

Shares of Lordstown Motors might be at the bottom but it is too early to tell. So far, price action has remained above support at the $2.35 level but we see that level getting tested and possibly broken. At this time, there is still no revenue for this stock and still two quarters at least before commercial production truly begins. In our view, there is no reason to buy this stock now except that it trades at such low levels and it would be easy to pick up a little just in case there’s some surprisingly good development to drive the market higher. We don’t think it would take much. 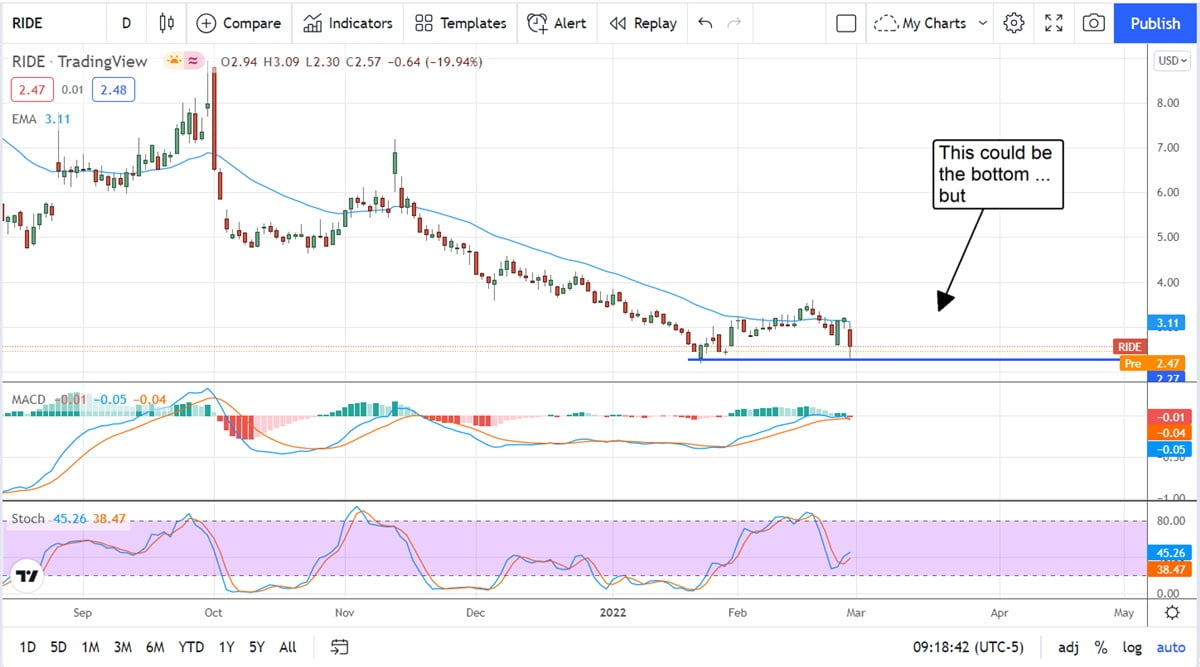 Should you invest $1,000 in Lordstown Motors right now?

Before you consider Lordstown Motors, you’ll want to hear this.

MarketBeat keeps track of Wall Street’s top-rated and best performing research analysts and the stocks they recommend to their clients on a daily basis. MarketBeat has identified the five stocks that top analysts are quietly whispering to their clients to buy now before the broader market catches on… and Lordstown Motors wasn’t on the list.

While Lordstown Motors currently has a “Sell” rating among analysts, top-rated analysts believe these five stocks are better buys.