The Highest Paid Jobs Per Hour In Every State 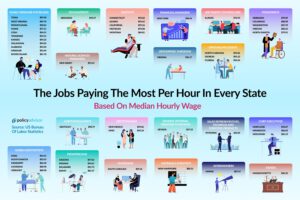 New research has compiled the jobs that pay the most per hour in every US state.

The analysis by insurance broker PolicyAdvisor.com studied data from the U.S. Bureau of Labor Statistics to find the occupations in each state with the highest median hourly salary.

It found that in most states the highest-paid jobs are in healthcare, with 40 states having their top earners based in the field. Family medicine physicians are the most commonly occurring in the list of jobs, being the highest-paid job hourly in 11 states. They make the most in Texas, with a median hourly wage of $99.98, and are paid the least in Rhode Island, with a median hourly wage of $81.78.

Chief executives are the most commonly appearing job not in healthcare, with three states paying them the most per hour. In Maryland, they earn a median wage of $96.07. Other jobs that appeared outside of healthcare included astronomers, who are the highest-paid per hour in Hawaii, with a median salary of $87.47. Air traffic controllers saw the highest hourly wages in Illinois, with a median of $76.93.

Wyoming had the lowest-paid top job out of all 50 states, with sales representatives in technical and scientific products earning a median hourly salary of $64.05.

Commenting on the findings, a spokesperson from PolicyAdvisor said: “Despite the healthcare field dominating the list with high salaries across many different jobs, it’s great to see the variety across other industries from astronomers to judges to air traffic controllers. It’s also fascinating to see the figures you can earn in each position for a single hour’s work, highlighting which occupations might bring the most pressure in the workplace.”

The study was conducted by PolicyAdvisor, a digital-first life insurance broker, using technology to make insurance simple, quick, and online.

The Highest Paid Jobs Per Hour