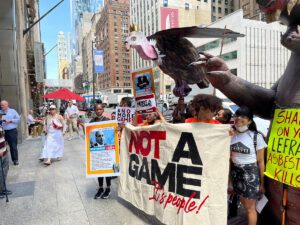 New York, NY – This morning, activist and protestors stormed the lobby of Elliott Management, the infamous vulture fund owned by Paul Singer that has for decades used predatory practices to hold vulnerable nations hostage in order to fill their pockets. Activists and protestors from The Center for Popular Democracy, New York Communities for Change, Churches for United Housing, Strong Economy for All, and Hedge Clippers joined together outside of Elliott Management and marched towards GoldenTree Asset Management, whose multi-billionaire owner Steven Tananbaum is best known for the economic collapse of Puerto Rico. These ‘vulture capitalist’ hedge funds have exemplified the vulture fund playbook that contributed to the economic collapses of nations like Ecuador, Argentina, Peru, Vietnam, Puerto Rico, among others.

The action comes as restructuring guru Buchheit warns that Sri Lanka might be the next nation to face the holdout problem – a tactic used by vulture hedge funds that allow a minority of the bondholders to refuse fair negotiations during the debt restructuring process. The holdout problem is one of the issues that would be addressed by the bill packaged that is being proposed by the Not A Game coalition.

The large coalition of activists and lawmakers that form the Not A Game, Its People campaign were joined by a traditional Afro-Puerto Rican drumming band and wielded a life-size vulture puppet. They chanted that these hedge funds must take, “Not a Penny More” from suffering nations, calling attention to the vile, predatory actions they have committed. Organizers called on New York State to utilize its power to change the rules by which these vulture funds operate in conjunction with a recent public comment from the International Monetary Fund (IMF) Managing Director who agreed with the urgency in the matter.

New York has long been known as a safe haven for a plethora of immigrant communities. However, New York State leadership has prioritized the interests of billionaires over those of communities whose home countries are being devastated by this predatory behavior. The “Not a Game” coalition’s New York legislative package, including the Model Law introduced by Senator Rivera and Assemblymember Davila and the Champerty Doctrine Reform, would create an orderly process for restructuring these countries’ unsustainable debt and show New York communities that their voices are being heard.

Quotes And Media From The Event

“New York is home to millions of immigrants, including Puerto Ricans and Ecuadorians who are directly impacted by vulture funds like Steven Tananbaum of GoldenTree Investment and Paul Singer of Elliott Management. Their vulture behavior is destroying the lives of our families and the wellbeing of our communities. This is not a game, we are people,” said Jesus Gonzalez, National Organizer at Center for Popular Democracy.

“These vulture funds call themselves financial activists, but what that really means is that they are predators. They’re activists in closing schools all over the world, they’re activists in shutting down hospitals. They are vultures. The bottom feeders of capitalism,” said Alicé Nascimiento from New York Communities for Change. “Right now, Sri Lanka is in the biggest economic crisis since the 1940s. They have no fuel and no medicine. People are taking to the streets. This is when people like Paul Singer swoop in. Sri Lanka is coming forward to creditors trying to negotiate. Vultures like Paul Singer absolutely refuse, using the money that would feed their children to line his pockets. All of this is legal, because he has changed New York law to make it so. What we’re doing here is saying enough is enough.”

“I want to be clear, this isn’t about attacking rich people just because they’re billionaires and we are not. This isn’t about people that have given back and care about humanity. This is about billionaires that have made their wealth through vulture hedge funds. These billionaires do not give a shit about human life. We’re asking other millionaires to be on the line with the people, to show that we have representation of wealthy people that do care about people. It’s about responsibility to humanity to allow people to live and let live,” said José “Dr. Drum” Ortiz from Bomba Yo.

“From his palatial apartment on Park Avenue, Paul Singer works every day to kill poor people all around the world to make himself rich. The hedge funds in this building are attacking people all over the world, in Guatemala, in Puerto Rico, in Ecuador, to make themselves rich. This is what’s happening in this building right here,” said Michael Kink, Executive Director of Strong Economy for All. “They close our schools, they close our hospitals, they take the food from starving children to pay off their bonds and their hedge funds. That’s why we’re here to march on them and to change the laws of the state of New York.”

“A few months ago I moved to Puerto Rico because, as a Puerto Rican woman, I thought I could not do justice to this campaign unless I experienced every single thing my people go through.  What I learned is that we are resilient. We hold our heads high. We help one another. People like Paul Singer, all of these wall street guys should feel ashamed that they have taken from an island that has never done anything to get things to where they all are now. I have nothing against billionaires, but I have a real problem with the way they’re going about it. This needs to stop,” said Gina de Jesus, representative from New York Communities for Change (NYCC).

“They have the power to change the lives of the people, but they choose to have money in their pocket. They’re closing schools, they’re closing hospitals. There is no working stability in Puerto Rico. Working people should be able to survive, to put food on the table. These vulture funds are taking advantage of the misery of the countries and benefiting from it. We are coming together to prevent this from happening to other countries in the world,” said Maria, member of New York Communities for Change (NYCC).

About the “Not a Game” Campaign

The “Not a Game” campaign was created by a coalition of New York and Puerto Rico-based organizations and groups in an effort to pass New York State legislation that holds vulture hedge funds accountable for their predatory practices. www.notagameitspeople.org.