The BEA Advance GDP for Third Quarter 2010 came in at +2.0%. However, Table 2. Contributions to Percent Change in Real Gross Domestic Product shows that Change in private inventories contributed +1.44 while real final sales contributed a mere .6.

How sustainable is that?

The answer is not very. This is likely the last hurrah for inventory replenishment even without factoring in upcoming cutbacks at the state level.

Not a V-Shaped Recovery

In terms of real final sales, this "recovery", is the weakest on record. Dave Rosenberg has some thoughts on that in Lunch with Dave.

The major problem in the third quarter report was the split between inventories and real final sales. Nonfarm business inventories soared to a $115.5 billion at an annual rate from the already strong $68.8 billion build in the second quarter — this alone contributed 70% to the headline growth rate last quarter. If we do get a slowdown in inventory investment in Q4, as we anticipate, it would really not take much to get GDP into negative terrain. We estimate that if the change in inventories slowed to about $94.0 billion in Q4 (about $22 billion below Q3 levels), GDP would contract fractionally. In other words, it won’t take much for GDP to slip into negative terrain. 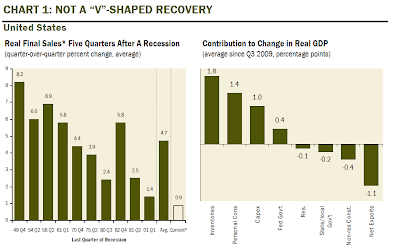 The recession may have technically ended, but outside of inventories, and the best days of the re-stocking process look to be behind us, this has been a listless recovery. At 60 basis points above zero, real final sales are just a shock away from double-dipping — a shock like looming tax hikes, accelerating fiscal cutbacks at the state/local government level or the millions of “99ers” about to fall off the extended jobless benefit rolls at the end of November.

In terms of components, the good news was that consumer spending did accelerate to a 2.6% annual rate from 2.2% in the second quarter — the best performance since Q4 2006. Non-residential construction eked out a 3.8% annualized gain, the first advance since Q2 2008. But the good news pretty well stopped there.

It is also no surprise to see imports bulge when inventories did the same, but what caught our eye in the external trade portion of the GDP report was the sharp slowing in export growth, to a 5% annual rate trend — half the pace we saw in the first half of the year. Weren’t the overseas economies supposed to be providing a big lift to the U.S. economy?

Finally, state and local government spending dipped 0.2% — the fourth decline in the past five quarters. At a 12% share of the economy, this sector is nearly twice as large as business spending, and can be expected to be a dead-weight drag on the economy as far as the eye can see.

Here is the bottom line: the double-dip has been delayed but not derailed; despite widespread cries from the economic elite to the opposite. The economic recovery is extremely fragile and unless we get an improvement in real final sales, all it would take would be a modest inventory drawdown to pull real GDP back into contraction mode.

Consumer Spending up 2.6 Percent? – No Not Really

Rosenberg mentioned the one bright spot was consumer spending was up 2.6%. Indeed Table 2 in the BEA report shows Personal Consumption Expenditures were +2.6%.

However, it is important to understand what components make up PCE.

I talked about PCE on August 3, 2010 in Personal Income Flat, Private Wages and Salaries Decline in June; Is Consumer Spending 70% of GDP? Checkmark Recovery Revisited

To understand the discrepancy, we have to know what goes into PCE in comparison vs. retail sales. Here is an interesting article written in August of 2009 that addresses the issue.

Is Consumer Spending is 70% of GDP?

Economist Michael Mandel’s article Consumer Spending is *Not* 70% of GDP not only addresses the above question, he also explains the apparent discrepancy between retail sales and consumer spending. Let’s take a look.

I opened up this morning’s NYT and see the big headline “Retailers See Slowing Sales in a Key Season.” And I just know that we are about to have another round of “consumer spending is 70% of gross domestic product, so blah blah blah blah of course we can’t recover unless consumers start spending again.” (Not in the NYT story, to their credit, but you can find similar quotes everywhere you look).

Blah blah indeed. As a textbook author, there are few things that frost me more than hearing “consumer spending is 70% of gross domestic product,” because it perpetuates two very large and very misleading untruths.

First, the category of “personal consumption expenditures” includes pretty much all of the $2.5 trillion healthcare spending, including the roughly half which comes via government. When Medicare writes a check for your mom’s knee replacement, that gets counted as consumer spending in the GDP stats.

Second, an awful lot of those back-to-school dollars are going to imported clothing and school supplies (how many of those laptops and iPods do you think are made in the U.S.?). A dollar of consumer spending does not translate into a dollar of domestic production.

I think we need to move towards presenting GDP in terms of production, rather than spending. We need a shift from the consumer to the producer as our main unit of analysis.

But for now, we need to stop being so darned obsessed with consumer spending.

Why Consumer Spending Is Important

I disagree with Mandel’s last statement because sales tax revenues are extremely important to state budgets.

However, Mandel’s excellent article helps explain many things even alleged "productivity" issues of the US vs. Europe. 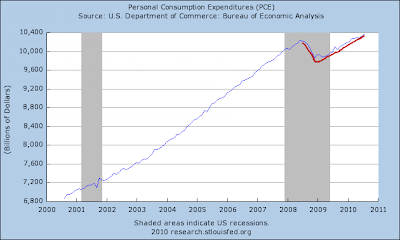 The above chart courtesy of the St. Louis Fed, shows one of the biggest distortions of reality you will ever see. Someone looking at the chart might actually get the idea that "consumer spending" has recovered above pre-recession levels.

However, state sales tax revenue (the only valid measure of consumer sales), is still far below 2007 levels and states are in serious trouble over it.

So no, consumer spending (in the real sense) is not soaring, and given the need for consumers to deleverage, it would not be a good thing if it were. For more on consumer spending and sales tax collections, please see Retail Sales Rise More Than Forecast; Once Again I Ask "Really?"