Thrilling Thursday – Futures Bounce Us Back

Wow, what a ride!

There was no volume to yesterday's move, which means it can be easily reversed and reversed it is already this morning as the markets pop 0.4% in the Futures (8:15).  As Dave Fry noted: "POMO continues apace and that leads to more dip buying as occurred this afternoon. After all HFT algos understand they still have time to trade before the music stops. Other investors are more cautious."

Although there’s very little positive in economic fundamentals at home and abroad, Sandra Pianalto said in a speech Wednesday: “In light of this progress, and if the labor market remains on the stronger path that it has followed since last fall, then I would be prepared to scale back the monthly pace of asset purchases.” Part-time jobs aren’t the stuff of real employment growth. You can change all the data you want by manipulating collection methodologies for GDP, inflation and now jobs, but in the end conditions are what they are in reality. Still, if the bots hold the line, they hold the line.  It's a fake market and you have to accept the fake trading that goes along with it.  What we're more concerned with is how fast we work off that Oversold indicator on the NYMO, as that will give us a nice indication of how bouncy we really are.  If a small move up flips us back to overbought – then a small move is all we're likely to get. 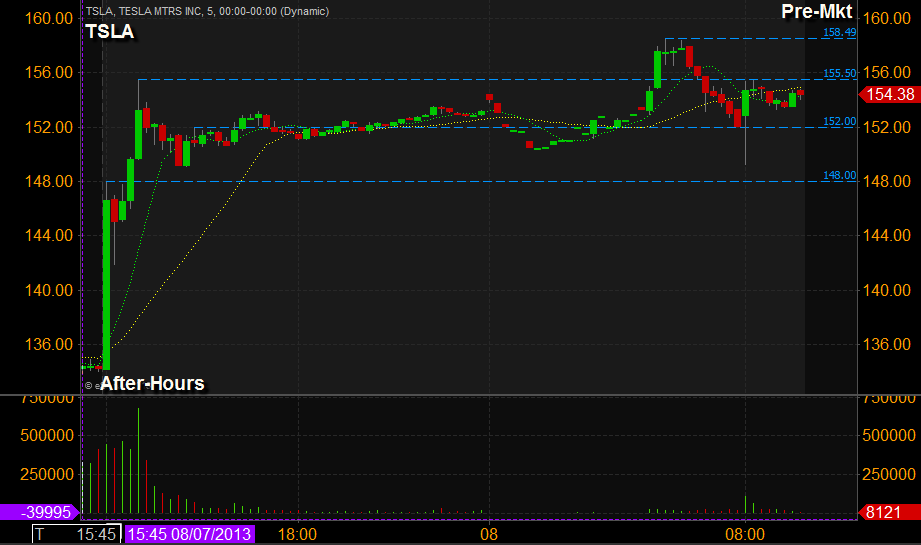 TSLA is making a huge move up and a lot of it is based on the "fact" that they beat their guidance of selling 4,500 cars by actually selling 5,150 cars in Q2 but, that's based on the FACT that no one seems to remember that TSLA already popped from $95 on June 20th to $133 (yesterday's close) on July 12th, based on the company making this announcement:

They are STILL guiding for 21,000 cars delievered and the fact that they delivered 650 more cars isn't as impressive when it's really just a matter of shuffling the paperwork.  Even stranger, TSLA claims they are now producing 500 cars a day – why then will they not deliver MORE than 21,000 cars for the year – has production peaked out with no improvement forseen over the next 6 months? Keep in mind we're short on TSLA, so we're pissed – but we're also long on TSLA – especially the last few trades we made (selling short puts, bull call spreads) as the stock ran over $130 on us.  TSLA delivered 4,900 cars in Q1 so who really thought they'd only deliver 4,500 in Q2?  That's just Musk mastering expectations to goose the stock over and over again.

Now there is a question as to whether TSLA actually earned 0.20 per $155 share or 0.05 or, as the WSJ sees it, actually LOST 0.26 per share.  Musk's 0.5 figure excludes costs associated with stock compensation, early repayment of a federal loan and costs associated with a lease program.  That, unfortunately, is not what they call "Generally Accepted Accounting Principles" (GAAP).  As noted by the WSJ:

On a GAAP basis, consistent with the way that rival auto makers report results, Tesla said it lost $11.79 million from operations, before interest and taxes, during the just-ended quarter, and burned $78.7 million in cash.

Revenue declined by more than $150 million from the first quarter, mainly because the company deferred some revenue associated with cars delivered under a new financing program designed to mimic a lease.

The purchase/lease financing accounted for 30% of the auto maker's sales in the quarter ended June 30. In addition to the lease change, Tesla received $51 million from selling pollution credits to other auto makers, down from $68 million in the prior quarter. 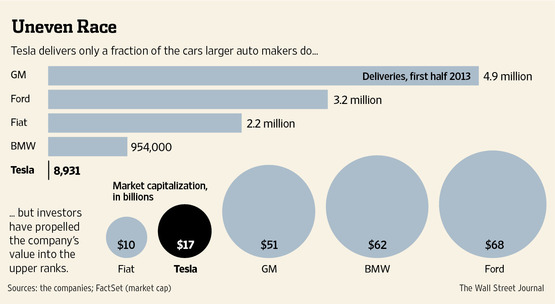 In light of these spectacular earnings, Goldman Sachs, like me, have raised their price target to $95 (from $84):  "One critical item for us that remains less clear is demand. While much of the company's valuation is based on the Gen 3, the Model S is the litmus test the market has over the next several years. That the company's target sales run-rate of 40k units for late 2014 embeds a 20K assumption for N America, (essentially unchanged from the NA run rate today) is a weaker signal on domestic growth than we would like to see even if the company is being conservative," they added.  Goldman modified 2013/14/15 EBITDA estimates to $181mn/$423mn/$669mn from $69mn/$267mn/$460mn.

Meanwhile, we'll have to scramble to adjust our bearish plays but It's also a fantastic morning to make new ones – if you believe in math…

Private equity has money coming out of its ears, but can’t find enough ways to spend it
http://qz.com/112895/private-equity-has-money-coming-out-of-its-ears-but-cant-find-enough-ways-to-spend-it/

Apple’s iPhone charger take-back program is genius PR—and it may even boost the bottom line
http://qz.com/112722/apples-iphone-charger-take-back-program-is-genius-pr-and-it-may-even-boost-the-bottom-line/

Facebook may finally have figured out how to make money in Asia
http://qz.com/111372/facebook-may-finally-have-figured-out-how-to-make-money-in-asia/

Why it’s so hard to stop college cost inflation in the US
http://qz.com/103658/why-its-so-hard-to-stop-college-cost-inflation-in-the-us/

Hedge Funds Are Sitting On $1 Trillion Of Debt
http://www.businessinsider.com/hedge-fund-industry-is-gigantic-2013-8

Are Banks Finally Ready To Lend Their Mountain of Capital?
http://dollarcollapse.com/the-economy/are-banks-finally-ready-to-lend-their-mountain-of-capital/

These Awesome 3D Printed Lightbulbs Are Perfect For City-Lovers
http://www.businessinsider.com/3d-printed-lightbulbs-topped-with-cityscapes-2013-8

ROSENBERG: The Death Of Peak Oil Is ‘Singularly The Most Bullish Underpinning To The Global Cost Curve’
http://www.businessinsider.com/rosenberg-on-shale-energy-and-peak-oil-2013-8

A Wall Street CEO Would Get Brutalized In The Press If They Acted Like Elon Musk Did On His Call Yesterday
http://www.businessinsider.com/elon-musk-taunts-competitors-2013-8

Had to drop off my French nephew to the airport at Newark and ended up spending 5 hours stuck in traffic on the NJ Turnpike because of a truck accident. They actually closed the road at some point. Missed the flight! FU trucks… I must say I thought I was doing a lot of diverse reading, but I see now you were not exagerating when you   once mentioned how much information you are digesting in the course of a day. Fascinating reading, although its making my mind go into hyperdrive. If it weren't for the medicine I think my head might explode.

My contribution to tonight's grab bag , from the dark side

Microbes and the mind

Futures down just a bit.  Asia up half a point with the Nikkei ending flat (down all day from the open).  Europe down a bit as well.

Cheap puts/Arivera – Remind me on the weekend.  I'd say China collapsing is probably the best catastrophe to bet on and we need to think of who's most affected by that.

Popping/Jfaw – Dollar weakness is helping but fake China demand is a huge factor (6:26 comment) – not sure it will last.

Think about that: Deliveries increased, but revenue was flat due to ZEV (zero emission vehicle credits). Those are payments the state of California requires other car companies to pay Tesla to make up for their lack of an electric car model.

As other companies catch up to Tesla and try to enter that market, ZEV revenue will continue to decline. Tesla noted that it would make an impact on their Q3 gross margin at the end of their letter. The question is whether the company can increase deliveries quickly enough to catch up with that loss of revenue, especially given admitted bottle necks in its supply chain.

Internet Economy/ZZ – I caught that one above, great article.

Reading/Jyoti – That's just the stuff I think is worth sharing!  Kids both had activities and Tina went with them so I had a free evening to do some reading…

IHG offers to allow Web sites some ability to cut room prices • 7:45 AM

InterContinental Hotels Group (IHG) offers to allow travel Web sites such as Expedia (EXPE) and Priceline's (PCLN) Booking.com to lower room prices for certain types of customers, such as those who are members of loyalty schemes or have used the sites before.

IHG makes the proposal after the U.K.'s Office of Fair Trade Trading (OFT) last year accused the hotel group of persuading Web sites not to cut tariffs to below those that IHG offered.

Other companies to be affected include Orbitz (OWW).

The OFT is now studying IHG's proposal. Shares are -1.4% in London.