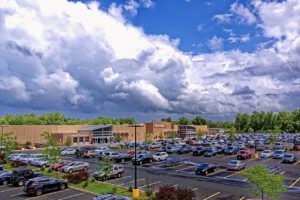 The world’s largest retailer has its eyes set on the metaverse.

Walmart’s Plans For The Metaverse

I’m talking about Walmart (NYSE:WMT), where more than 240 million shoppers visit each week. Walmart’s not the sort of business you’d expect to dive headfirst into a brand-new tech megatrend.

But it recently revealed its massive plans for the metaverse.

Walmart also recently said it will offer its own virtual currency.

Now, I don’t see “Walmart Coin” (or whatever it’ll be called) seriously competing with bitcoin (BTC) or Ethereum (ETH).

But this is still huge news.

It confirms what we’ve been saying for months. The metaverse is today’s biggest megatrend.

And many of the world’s richest and most powerful companies are investing big bucks to establish a foothold in it.

In a minute, I’ll tell you an easy way to invest in this trend. And no, I won’t encourage you to buy Walmart stock.

Before that, let me set the stage…

It’s a digital place where people can socialize, create, work, and play.

At its core, the metaverse is the next version of the internet. Instead of staring at a computer or phone screen, you’ll wear a headset that puts you inside a virtual world.

Then in July, I explained why the metaverse is the next frontier for advertising.

Not only that, we’ve recommended several ways for our subscribers to cash in on the metaverse.

At the time, those recommendations may have seemed like risky gambles. After all, hardly anyone outside of RiskHedge was talking about the metaverse.

Now, the metaverse is on the mind of every major CEO.

In October, the social media giant changed its company name to Meta.

And the move was more than a run-of-the-mill corporate rebranding. Facebook is shifting its entire focus from social media to the metaverse.

According to CEO Mark Zuckerberg, the metaverse is now a bigger priority for the company than Instagram, Facebook, and WhatsApp!

And Zuckerberg is putting his money where his mouth is…

The tech giant spent $10 billion on the metaverse in 2021. And it plans to hire 10,000 new employees to build this new version of the internet.

And Meta isn’t the only company building out the space.

Once the deal closes, Microsoft will become the third-largest gaming company in the world based on revenue. That’ll put it right behind Tencent (OTCMKTS:TCEHY) and Sony (NYSE:SONY).

As a refresher, NFT stands for non-fungible token. In short, NFTs are certificates of ownership stored on a blockchain. Think of them like virtual deeds that allow you to own digital items in a metaverse.

Even GameStop (NYSE:GME) is interested in the metaverse. It’s going to create a $100 million fund to distribute to developers making gaming NFTs.

According to Matthew Ball, the metaverse economy will be worth up to $30 trillion by 2030!

For comparison, all the companies on the New York Stock Exchange—the largest stock exchange in the world—have a combined market cap of around $27 trillion.

Even if you have more modest expectations, precedent from the digital economy, the internet, the mobile internet, suggests that this is a $10–30 trillion opportunity that will manifest in a decade or a decade and a half. Our belief is that value will be widely distributed across the semis, the computes, the payment companies, virtual platforms, and other infrastructure providers.

This is not an opportunity investors can afford to miss.

An Easy Way To Profit

One easy way to profit is by buying the Roundhill Ball Metaverse ETF (METV).

This fund invests in companies that have a presence in the metaverse, including Facebook (Meta Holdings), chip maker Nvidia (NASDAQ:NVDA), and Microsoft.

It’s a good way for investors to get broad exposure to this megatrend.

Just remember that the metaverse will play out over decades. So, it’s crucial to have a long-term outlook on any metaverse investments.

The Great Disruptors: 3 Breakthrough Stocks Set to Double Your Money”

Get our latest report where we reveal our three favorite stocks that will hand you 100% gains as they disrupt whole industries. Get your free copy here.